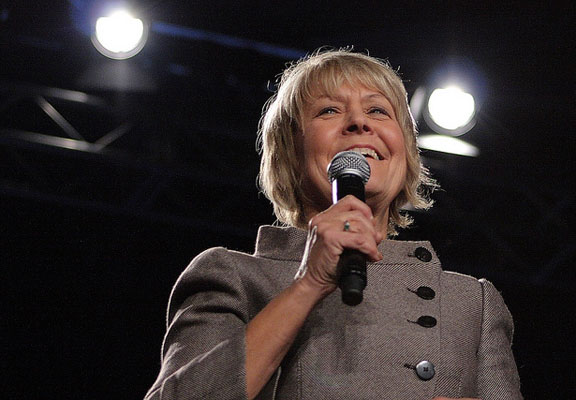 Both parties are pouring money into Christie Vilsack’s dead heat race to unseat longtime incumbent Steve King, who continues to believe the State Department has been infiltrated by the Muslim Brotherhood.

But Democrats are mounting a vigorous push for his challenger, Democrat Christie Vilsack, and she is perilously close – within just a few percentage points – of taking his seat.

If she does, she will be the first woman Iowa has ever sent to Congress.

Former President Bill Clinton recently endorsed her, telling a crowd of 2,500 in Sioux City on Oct. 12 why they needed to vote for Vilsack.

Millions of dollars have been pouring into the race from outside groups on both sides, with Vilsack the one most enriched by the spending frenzy. Out of a total of $3.3 million, $2 million has gone to Vilsack and over $1.3 million to King.

“Karl Rove’s super PAC and other special interest groups are running ads against us,” said Sam Roecker, director of communications for Vilsack’s campaign.

In the most recent round of infusions–between Oct. 19 and 25–Vilsack also came out ahead. Roughly $145,000 of the $170,000 in outside spending that week went to Vilsack, according to the Campaign Finance Institute, in Washington, D.C.

One big outside spender is the Humane Society Legislative Fund, which is running ads highlighting King’s vote against a federal ban on bringing children to dog fights. It has spent almost $600,000 opposing King, according to the Federal Election Commission, as of Oct. 23.

King explained the vote by saying that state laws are sufficient and that the federal government shouldn’t regulate the matter, reported the Des Moines Register. However, during a town hall event in July, he said that banning animal fighting while allowing human fighting elevates animals over humans.

Tim Hagle is a professor of political science at the University of Iowa in Iowa City and the faculty adviser for the university’s College Republicans. He said King’s races became more competitive after redistricting, which left the state with four instead of five districts. Redistricting meant King had to introduce himself to a new constituency that leans Republican but isn’t as conservative as his current domain.

Roecker, at the Vilsack campaign, said 52 percent of the newly drawn district is foreign to King. “That opens the door to his record in Congress.”

Redistricting served as a perfect entry point for Vilsack. Although she’s has never run for office before, she is the former first lady of Iowa, married to former two-term governor Tom Vilsack, who is now the secretary of agriculture in the Obama administration. She has not only wide name recognition but strong backing from the Democratic Party and the political connections necessary to mount a formidable campaign.

King is well known on the national stage as a far-right figure. He told the Sioux City Journal in August, “We need to move the political center in America to the right.”

On a Sunday talk show on Oct. 21, King defended comments he’d made comparing immigrants to dogs, calling it a “compliment,” and continued to make accusations linking Huma Abedin, top aide to Hillary Clinton, to the Muslim Brotherhood. He also continued to evade questions about President Barack Obama’s birthplace, saying, “I don’t know where he was born, but I don’t see the indication that he was born anywhere else.”

Roecker said King’s incendiary statements are “not appealing to independent voters,” a group that Vilsack must win over to take King’s seat.

While a King victory is not assured, Hagle of the University of Iowa also noted the new district still has over 50,000 more Republican voters than Democratic ones, “the most lopsided of four districts,” which is “tough for her to overcome.”

Dianne Bystrom, director of the Carrie Chapman Catt Center for Women and Politics at Iowa State University, emphasized that King is facing his most serious challenge. While incumbency is difficult to surmount, she said, it is a “two-to-three point race.”

“No one else has been this close,” she said – or this well funded.

Presidential tailwinds are also in the race in this swing state. If Obama wins, Vilsack could benefit from a higher than usual turnout by independent voters in a general election year.

After her husband’s second gubernatorial term ended, Vilsack – a former journalist, teacher and professor — founded the Iowa Initiative in 2008, a private foundation dedicated to reducing unintended pregnancies among young women. She left her position as executive director in 2011 because she was considering running for election.

Bystrom said that she hasn’t mentioned her time with the foundation on the campaign trail and that Vilsack’s campaign advertisements have not made much of women’s issues – likely because she must win over so many moderate and conservative voters.

She agreed with that tactic since the Obama campaign is already blanketing the state with ads focusing on women’s health care and featuring women claiming–without ever explicitly mentioning abortion or contraception–that this election is the most frightening they’ve ever seen.

“If I were Vilsack, I wouldn’t think I would need to address it,” Bystrom said.

Instead of talking about her own record on women’s health, Vilsack has repeatedly gone on the attack, suggesting that King goes so far as to oppose women’s right to contraception.

“We would like him to answer where he stands on contraception,” Roecker of the Vilsack campaign told Women’s eNews.

The comment King made earlier this year concerned the Supreme Court case Griswold v. Connecticut, which declared Connecticut couldn’t ban the use of contraception for married couples. King said the case “manufactured the right to privacy,” paving the way for “mandated abortion.”

King also said during a floor speech in 2011 regarding mandated coverage of contraception under the Affordable Care Act, “Preventing babies from being born is not medicine” and “If we let our birth rate get down below replacement rate we’re a dying civilization.”

King argues that his beliefs have been repeatedly warped by Vilsack. “I simply related the background to that [Supreme Court] case. I’ve never taken the position that . . . states have the right to ban contraception,” he said on a local TV station on Oct. 21. “I’m not taking a position on the sale of contraception at all.”

He also walked back from reports that he said he’d never heard of anyone becoming pregnant as a result of rape or incest, seeming to argue that he meant he had never personally known someone in that situation. He said he was “open to discussion” on the matter of its legality, but wouldn’t say whether he might ever support abortions in those cases.

Would you like to Send Along a Link of This Story?
https://womensenewsp.wpengine.com/story/campaign-trail/121026/former-first-lady-iowa-battles-tea-party-king 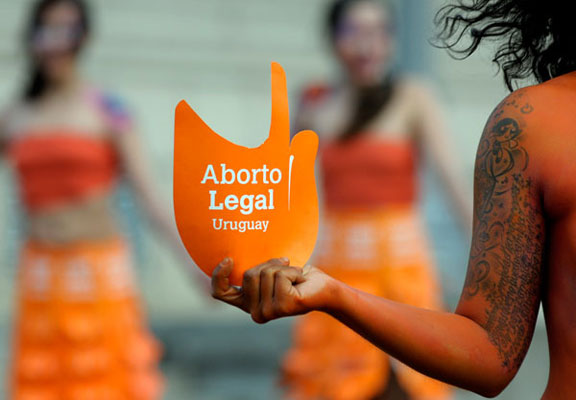