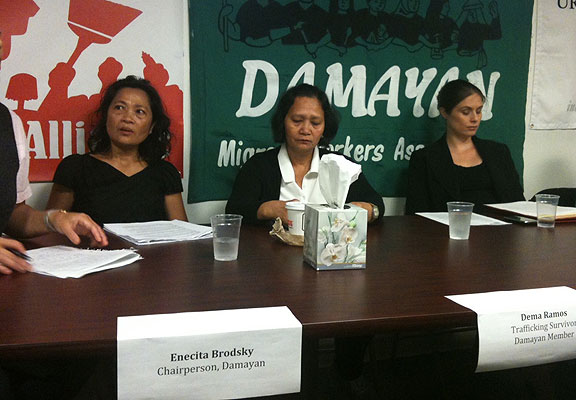 A Filipina trafficked by a Kuwaiti diplomat spoke out last week about her abuse. A New York advocacy group that helped her win a settlement is staging a Sept. 21 demonstration to prod her country’s U.S. consulate to help victims like her.

NEW YORK (WOMENSENEWS)–Dema Ramos’ voice quivered as she recounted over three years of abuse she endured during her time with a Kuwaiti diplomat and his family, both in the Middle East and in New York City.

Through a translator at a press conference here last week, Ramos said that, at an earlier point in her life, she did not believe a country could be worse for workers than the Philippines. But the deep, calming breaths and pregnant pauses she had to take underscored how wrong she was.

The 57-year-old Filipina, now certified by the U.S. government as a victim of trafficking, said she began working for the family in 2006 after she responded to an ad seeking domestic workers in Kuwait. She wanted to earn money to help support her family.

She is one of many women who are "lured by the promise of high-paying jobs," said Enecita Brodsky, chair of the event-hosting organization Damayan Migrant Workers, which helped Ramos escape her abusive situation, find legal representation and receive a settlement from her former employer.

After this major victory, Damayan will be staging a rally on Sept. 21 in New York City to light a fire under the Philippine U.S. consulate to do more to protect its overseas workers here.

Various members of Damayan have filed affidavits at the consulate indicating that their passports were stolen — a known sign of worker abuse — but "the consulate hasn’t done anything to help those women," said Leah Obias, campaigns coordinator and case manager at Damayan, in a phone interview.

"We’re not seeing the kind of support from the consulate that there should be," she said.

Obias theorized that a lack of training in what trafficking looks like might be a contributing factor, but also noted that the consulate works with diplomats, which "puts them in a certain kind of position with diplomats themselves." But, she added, "diplomacy should not come at the expense of workers’ basic rights."

She also said, however, that the August ratification of a new international labor convention on domestic workers’ rights was "a good first step."

During her two and a half years in Kuwait and Lebanon, Ramos made about $165 a month. She barely slept as she cared for five children, cleaned the house, cooked and washed and ironed clothes. Other maids rotated in and out as they were hired and quickly left, although at least one of those women was physically assaulted before she quit.

While with the family for eight months in New York City, where the father worked as a diplomat, she typically made about $500 per month. Considering her long hours, she said that amounted to about 69 cents an hour. She received only two days off during that time: Christmas and New Year’s Day.

After the family arrived in the city, they swiped her passport. The prospect of attempting an escape without documentation frightened Ramos.

The Philippine economy enjoys a huge influx of earnings from overseas workers, with over $20 billion in remittances sent there every year. Ten percent of Filipinos work overseas, said the panelists.

Manila classified about 150,000 of its overseas workers as domestic and household workers in 2011, according to a Sept. 11 letter sent by Damayan and the National Employment Law Project to the Philippine consulate in New York City.

When diplomatic immunity becomes involved, as in Ramos’ case, workers face particular challenges because it almost always protects the diplomat from prosecution. A Washington Post article from 2009 cites the case of Mildrate Yancho Nchang, a domestic worker abused by a Cameroonian diplomat’s family. Her case was dismissed when the diplomat invoked immunity.

Between 2000 and 2007, the Philippines issued more A3 visas — those typically given to the domestic workers of diplomats — than any other country in the world, according to the U.S. Government Accountability Office.

The letter sent to the Philippine consulate in New York City asks that it work with Damayan to prevent abuses and advocate for additional protections in cases of "abuses of diplomatic immunity."

Many Filipinas working abroad as domestic workers "face rape, physical violence and sexual abuse," according to the State Department. Ramos made no such allegations during last week’s press event.

Ramos’ lawyer, Nicole Hallett, said that her client suffered health problems and emotional distress while working for the Kuwaiti family.

While she was caring for the children outside the family home she asked other domestic workers from her country how she could get help. Someone connected her to Damayan and during a rare outing when she was allowed to attend church, she escaped in a prearranged getaway car.

Ramos is currently applying for a T-visa, which is available to trafficked workers. She will obtain a green card, a type of temporary residency permit, and may be allowed to bring her family to the states.

Ramos did not have to file a lawsuit against the diplomat because the employer was quick to settle, which, Hallett said, "We see as a victory." Hallett could not disclose the details of the financial settlement reached by the diplomat and Ramos.

Damayan has been pushing the issue of Philippine workers’ rights in response to both the Philippines’ ratification — which happened just last month — of the International Labor Organization’s first convention for domestic workers and Ramos’ desire to speak out, Obias said at the event.

The convention — which requires domestic workers to receive the same protections for hours worked, overtime, minimum wage, time off and more — is the first set of global standards for domestic workers, according to Human Rights Watch. The Philippines is the second country to ratify it, after Uruguay did so earlier this year.

The United States hasn’t ratified that convention but does have the Trafficking Victims Protection Reauthorization Act.

Hallett noted that few cases are brought under the act, which she argued was not a reflection of the rate of abuse but the fear victims have in coming forward.

Panelists were mixed about the significance of the International Labor Organization’s convention. One panelist said only time would tell if it had "teeth." Hallett added that laws and regulations are the "first step, not the last step."

Ramos castigated her country’s consulate, saying, "They were supposed to be supporting Filipinos abroad."

While the Middle East and Persian Gulf are most notorious for domestic-worker abuses, her case spotlights infractions taking place on American soil.

Other Asian countries have also been contending with the plight of overseas workers. In August, Nepal announced that it was barring women under 30 from working in Persian Gulf states due to reports of abuse, reported CNN in early August. Human Rights Watch, based in Washington, D.C., condemned that decision, labeling it discrimination and calling for Nepal to instead improve protections for female workers.

In 2010, a Human Rights Watch report found a steep increase in female migrant workers in recent decades. Such women are now about half of all such workers worldwide.

In August 2012, a Philippine official said that the country would begin a five-year plan to bar exploitative employers in other countries from hiring Filipino workers, although rights advocates argue that there are ways to work around such a system, reported Gulf News.

Would you like to Send Along a Link of This Story?
https://womensenewsp.wpengine.com/story/prostitution-and-trafficking/120915/philippine-us-consulate-faces-trafficking-heat 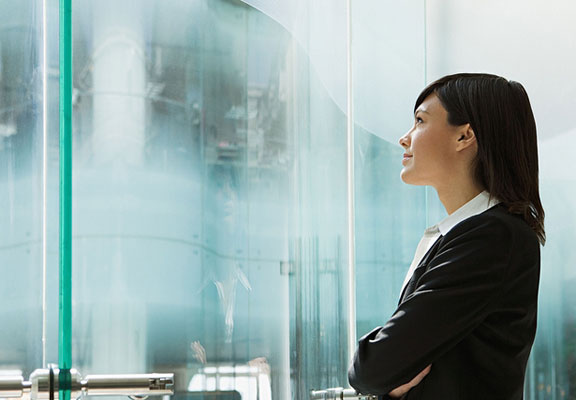 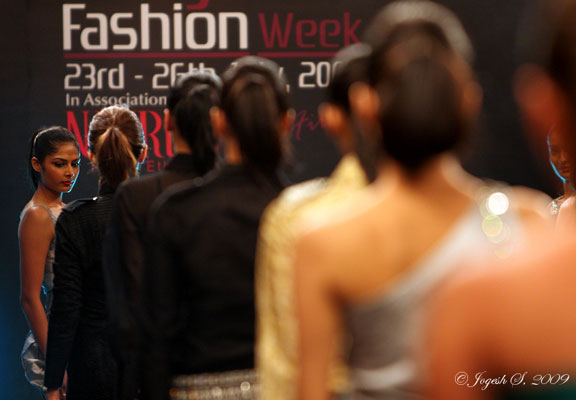