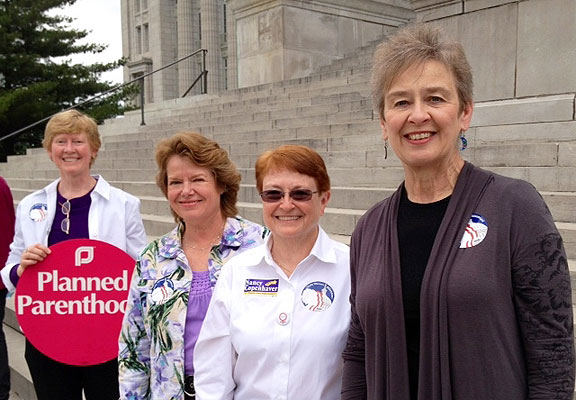 Ruth Ehresman (right) stands with other candidates at the Missouri State Capitol for a rally against the War on Women in April.
Health & Science

Health reform is beginning to require insurers to cover contraception, which is bringing battles over the mandate to a head in states across the country. “It’s not a safe place for women and health care,” says a congressional candidate in Missouri.

ST. LOUIS (WOMENSENEWS)–Seven cents a day; about $26 a year.

That’s how much it costs a company to pay for an employee’s contraception benefits, the U.S. Department of Health and Human Services reported in February.

But that low cost hardly means the battle for contraceptive coverage is won.

“It’s not a safe place for women and health care,” says Ruth Ehresman, a candidate in Missouri’s Aug. 7 race for the House of State Representatives for the 78th District in St. Louis.

“I’ve worked as a health care advocate for six years to help pass the Affordable Care Act,” says Ehresman. “Now the whole battle is being taken to a new level, which is one of the reasons why I’m particularly excited to win this office.”

In June the Supreme Court upheld the basic constitutionality of health reform but since then the legal heat has moved to the states.

In the weeks leading up to Aug. 1, when the Affordable Care Act began requiring most insurance companies to cover contraceptive services, legal challenges swarmed around the country.

In several states, including Missouri, opponents say the rule violates the freedom of religious organizations that morally oppose contraception.

In July, Missouri’s Gov. Jay Nixon calmed the fears of health activists and women when he rejected a bill allowing religious employers to cut out contraceptive coverage due to moral convictions. But Nixon, who received 10,000 letters protesting the bill, only incited a Republican legislature now vowing to over-ride him when they return to the state capital this September.

Just days before the rule took effect Aug. 1, a district court judge in Denver, according to the New York Times, granted a temporary injunction to protect a Catholic-owned heating and cooling company that refused to insure contraceptive services from incurring federal fines. That ruling is the latest victory for a fast-growing campaign against the Affordable Care Act’s contraception mandate.

Although the health care law allows some religious organizations such as churches and archdioceses to opt out of the rule, it does not exempt religiously affiliated schools, hospitals and charities.

At least 24 lawsuits have been filed by 58 plaintiffs across the country claiming the health care law undermines their religious freedom, reports the Washington-based Becket Fund for Religious Liberty.

In May, dozens of archdioceses across eight states and the University of Notre Dame in Indiana made headlines when they filed suit against the Department of Health and Human Services to counteract the contraception mandate.

Some groups have partnered across denominations in a bold display of solidarity. In July, Illinois-based Wheaton College, a leading evangelical institution, teamed up with the Catholic University of America in Washington, D.C., to file suit against the Secretary of Health and Human Services Kathleen Sebelius. Together they say the health care law “unconstitutionally coerces” the schools to violate their beliefs or face fines. On Aug. 1 the Becket Fund requested a federal court in D.C. to grant Wheaton College emergency relief from having to implement the contraception rule.

The Obama administration has given some religious organizations a year to accommodate the rule and will shift responsibility for paying for contraception coverage directly to the insurance companies and away from religious employers.

But religious organizations who insure themselves–rather than using outside providers–say this doesn’t help them at all.

As health reform rolls out it confronts uneven legal ground in the different states. Currently 28 states, including Missouri, have a birth control law that says that any insurance company subsidizing prescription drugs must also subsidize contraception services. A total of 19 of these states allow religious organizations such as churches and archdioceses–and in some cases schools and hospitals — to refuse to pay for contraception benefits due to moral convictions, reported the New York City-based Guttmacher Institute.

Dan Mendelson, founder of Avalere Health, a strategic advisory company focused on health care systems, based in Washington, D.C., predicts the Obama administration will hold firm on this issue. “This administration has made it very clear that it will strongly support the availability of contraception,” he says.

Meanwhile, most states, as part of health reform, stand in line to accept a windfall of funds to add millions more to Medicaid, the government insurance plan.

House candidate Ehresman says that could put the political ball back in the corner of those who support health reform in her state.

Already Missouri has cut more than 100,000 families off Medicaid since 2005 to balance the budget. The governor at the time passed a bill which used the state’s discretionary power to lower Medicaid’s income eligibility ceiling. Parents, for example, went from being eligible if their incomes were below 75 percent to about 18 percent of the federal poverty level.

“Missouri has wasted time protesting the ACA [Affordable Care Act] and passing meaningless bills and resolutions,” says Ehresman. “But we have an opportunity to move forward and implement policy that will mean better health care for a greater number of women.” 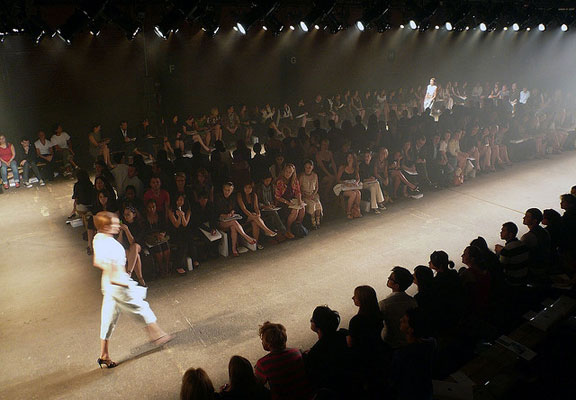 Feminism Can Decode Politics of Fashion 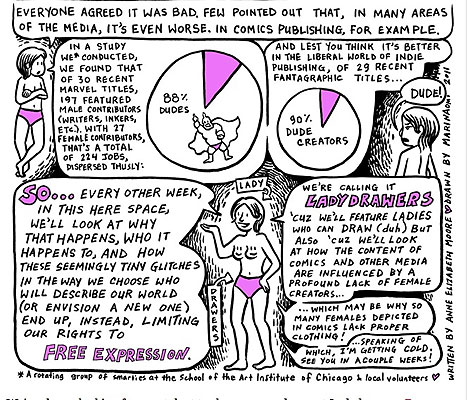