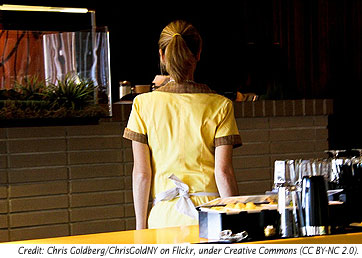 A waitress in a family-style restaurant in Detroit says it’s a struggle to make ends meet. Most servers are women and they are subject to a sub-minimum wage that hasn’t been raised since 1991. Family members often provide a crucial safety net.

(WOMENSNENEWS)–The greatest challenge of Zhanneta Dunder’s work as a server in a family-style restaurant in Detroit is not carrying heavy trays of food, but stretching her earnings of $300 a week to support herself and her 11-year-old daughter.

“It is a struggle to pay the rent, let alone gasoline, car insurance and my daughter’s school supplies,” said the 41-year-old waitress. “But I’m grateful for the job because I like the people I work with and the customers are nice.”

In 1995, Dunder, her then-husband and her oldest daughter moved to Michigan from Moldavia in Eastern Europe. “I didn’t speak much English, so most fields were closed to me. Fortunately, I landed a job bussing tables in a restaurant where I learned the basics of the industry and improved my English skills.”

Dunder, who is now divorced, has completed a training program at another restaurant and is proud of the attention she gives her customers. “If the first customer is in a rush, I get the coffee in record time. If the second customer needs extra napkins, I make sure she has them.”

They say the hike is needed to provide a livable income. Tipped workers, the group says, are more likely to fall into poverty than those who receive minimum wage. Servers rely on food stamps at nearly double the rate of the general population.

No Food on the Table

“Unfortunately, today many restaurant workers who serve America its food cannot afford to put food on the table for themselves and their families,” said Vanessa Faraj, chapter organizer of Fair Eats, an Atlanta-based organization founded by members of 9 to 5, a diverse, grassroots nonprofit organization that helps strengthen women’s ability to win economic justice.

Servers–71 percent of them women and making up the largest group of all tipped workers–represent the seventh-lowest paid occupation of the country’s lowest paid jobs, with a median hourly wage of $8.81, well below the poverty wage, the Bureau of Labor Statistics reports.

“Because their pay is so dependent on tips, servers’ wages vary widely,” said Sylvia Allegretto, co-chair of the Center on Wage and Employment Dynamics at the Institute for Research on Labor and Employment of the University of California, Berkeley.

Allegretto, who worked as a waitress for seven years, added: “The weather, the time of day and the customer’s mood affect the tips in good times. During downturns in the economy, tips plummet because people eat at home or order less expensive meals. Servers are often required to split their tips with managers and owners, which is illegal.”

Ninety percent of female servers are not paid enough to enjoy basic economic security, according to the 2012 Basic Economic Security Index, which measures the ability to afford housing utilities, food, transportation, child care, health care, emergency and retirement savings. For men that figure is 75 percent. The index is produced by the Washington-based Wider Opportunities for Women, an organization that works to improve the economic security for women.

Dunder is now attending a culinary school and hoping to open her own restaurant. That could help her financial security some day, but for now it means she cannot work full time and can’t afford child care.

“Weekly fees for after-school care can easily top $200 a week, which would sink my budget,” she said.

To make ends meet, she has moved to a modest, one-bedroom apartment in a complex in Oak Park, Mich., where many Russians live and share child-care responsibilities.

“Although the restaurant industry is one of the largest and fastest growing sectors of the economy, it offers some of the nation’s lowest wage jobs with little access to benefits and career advancement,” said Allegretto. “The federal sub-minimum wage hits women hard because they are the majority of workers in the restaurant industry.”

“Women, especially those of color, earn less, because they are more highly concentrated in fast-food and family-style restaurants than in fine dining restaurants where higher wages are found,” said Jonathon Hogstad, national research coordinator of ROC-United, which was founded after Sept. 11, 2001, to help restaurant workers displaced by the attacks on the World Trade Center. “They are also under-represented in the industry’s highest paying restaurant positions and overrepresented in many of the lowest jobs.”

“As a middle-aged, divorced woman, I should be saving for retirement,” she said.

Like many restaurant employees, Dunder’s safety net consists of contributions by family and friends.

“I used to spend an hour and a half a day traveling by bus to and from work,” she said. “Thanks to the car given to me by my sister, the trip now takes 10 minutes. My sister, who lives in Moscow, has promised to give me the funds to start my restaurant.”

Would you like to Send Along a Link of This Story?
https://womensenewsp.wpengine.com/story/labor/120522/waitresss-wages-leave-little-take-home 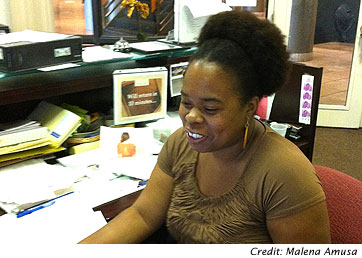 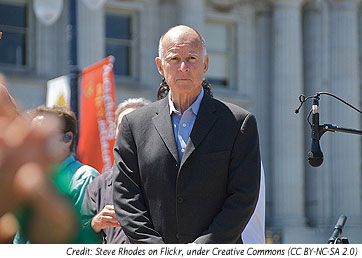