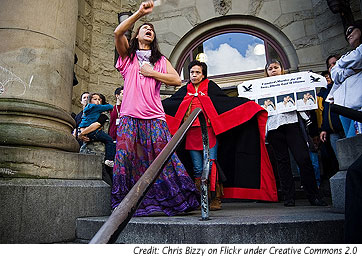 Fifteen organizations last week intensified their opposition to a government inquiry into missing women in Vancouver’s downtown eastside. In an open letter, detractors said they would instead cooperate with a U.N. probe launched in December.

VANCOUVER (WOMENSENEWS)—Women’s advocates are strengthening their boycott of an inquiry by the British Columbian government into the disappearance of women in Vancouver’s downtown eastside between 1997 and 2002.

They say they will be working with international investigators instead.

“Our organizations will dedicate what limited resources we can offer to working with the United Nations to facilitate their investigations and fact-finding processes in order to ensure that Canada is held internationally accountable,” says an April 10  open letter to the inquiry’s commissioner, Wally Oppal, that is signed by 15 organizations.

The inquiry is charged with examining police inaction during a time when many of the missing women were murdered by serial killer Robert Pickton. Many of Pickton’s victims were Aboriginal.

So far the commission, which began in October of last year, has been gathering evidence. Now it is beginning a second phase to create recommendations for the conduct of police investigations.

Robyn Gervais, the only lawyer representing Aboriginal interests quit last month, saying Aboriginal voices were being marginalized by a deference to police officials. Her position since then has been filled by two lawyers.

Harsha Walia works with the Downtown Eastside Women’s Center in Vancouver, one of the groups in the boycott.

Walia says the inquiry in Vancouver has been protecting police rather than forcefully examining their conduct. “The police and the authorities have not been forthcoming at all, which negates the point of an inquiry, which is why we are pushing for a U.N. inquiry because we think it will be more independent and more just.”

The Native Women’s Association of Canada, an Ottawa-based advocacy group representing 13 Aboriginal women’s organizations across the country, reports that more than 600 Aboriginal women have gone missing in Canada since 1990. Claudette Dumont-Smith, the group’s executive director, says her organization has brought the broader issue of missing and murdered Aboriginal women across Canada to the United Nations consistently since 2005.

Canada maintains that it has adequately addressed the issue. The government allocated $10 million for the Department of Justice to spend during the past two years. Funding ended in March. The government spent the bulk on police, court and victim services specializing in Aboriginal communities. Since 2007, the government has spent $1 million on services to support the families of missing and murdered women in western provinces.

This year’s federal government budget did not have any new commitments focused on missing and murdered Aboriginal women.

In December, the Native Women’s Association of Canada along with the Feminist Alliance for International Action, an Ottawa-based group focused on international human rights, announced that the U.N. Committee on the Elimination of Discrimination against Women had initiated an inquiry.

A representative of the U.N. committee has described the inquiry as confidential and has said investigators would seek the Canadian government’s cooperation.

Women’s rights advocates say they hope a U.N. inquiry will transform a perceived Aboriginal issue into a Canadian issue.

“What I hope for is governments in Canada and for the general public to understand that we have a serious human rights crisis on our hands,” says Shelagh Day, chair of the human rights committee of the Feminist Alliance for International Action. “This requires some serious long-term investment of money, care, respect and attention that it hasn’t gotten yet.”

Day also charges the government with failing to address the severe social disadvantages of Aboriginal women. “Many are living in very harsh conditions. That makes it more difficult for them to escape violence.”

A Department of Justice spokesperson says social issues are addressed through other departments, such as Status of Women Canada, which has directed $1.8 million to the Native Women’s Association of Canada for a three-year project targeting the root causes of violence against Aboriginal women.

Canada is a signatory to CEDAW, a U.N. treaty that requires signing nations to abolish discrimination against women, including the eradication of racial discrimination in the internal affairs of states. The country also has signed an optional protocol that permits a CEDAW committee to conduct an inquiry where grave and systemic violations of the convention are reported. The United States is one of the few nations that has not signed CEDAW.

Dumont-Smith, of the Native Women’s Association of Canada, says she is looking forward to the results of the U.N. inquiry. “I think we will find out that there are gaps in government policies. There is a lot of systemic racism going on supporting the fact that Aboriginal women continue to go missing and are murdered and that the issue is not being addressed in a meaningful manner.”

The Department of Justice responded to these allegations by pointing to a host of funding initiatives by six departments to improve on-reserve living conditions, including physical and mental health care.

One initiative establishes a Truth and Reconciliation Commission to recognize the legacy of residential schools that wrenched Aboriginal children from their families. The “stolen children” schools started in the 19th century and the last one closed in 1996.

Would you like to Send Along a Link of This Story?
https://womensenewsp.wpengine.com/story/crime-policylegislation/120417/advocates-blast-canadian-probe-missing-women

Sadiya Ansari is a Pakistani-Canadian freelance writer, based in Vancouver.

One response to “Advocates Blast Canadian Probe of Missing Women” 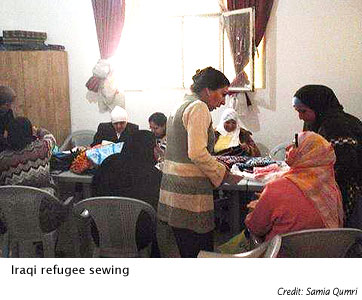