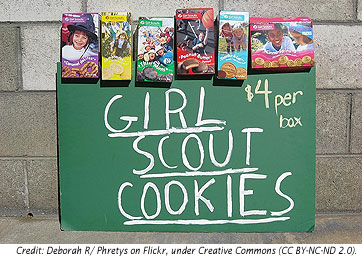 Selling Girl Scouts cookies is more than a fundraiser; it shows women how to become strong leaders, says Kathy Cloninger in this excerpt from her new book “Tough Cookies: Leadership Lessons from 100 Years of the Girl Scouts.”

(WOMENSENEWS)–There’s a real difference between the way the public looks at the accomplishments of girls and boys.

People latch onto the cuteness and wholesomeness aspects of the Girl Scouts cookie sale because they really don’t know what to do with the idea of girls acting in an organized, effective, powerful way. And we in Girl Scouting haven’t yet done enough to publicize the fact that the cookie sale is a huge leadership lesson for all involved, not just an organizational fundraiser with cute little girls on the front lines to help boost sales.

For the girls, the cookie sale is a life-changing experience. It is the only childhood activity available to girls ages 6 to 17 across the country that is actually a hands-on business. It’s not at all like reading about sales and merchandising in a classroom. You literally, as a girl, are presented with the chance to run your own business. And you do it like most businesses, in partnership with a team.

Better yet, it’s a business that people see as important. Just being able to say "I’m a Girl Scout and I’m selling cookies" puts a girl in a position of respect, influence and approval. At the same time, she’s learning how to interact with coworkers, how to play by rules, how to be ambitious, how hard work pays off and how to set both long-term and short-term goals.

Long- term goal setting? For 8-year-old kids, "next year" is long-term goal setting. But many Girl Scouts dare to plan further ahead than that. A friend told me a remarkable

story about her daughter, who joined Girl Scouts as a 5-year-old Daisy and stayed with the same troop all the way through high school:

"When the girls in the troop were in first or second grade, they decided that they wanted to go to London when they got to high school. They saved cookie-sale money every year, and they accomplished their goal. They went to London and visited the headquarters of the World Association of Girl Guides and Girl Scouts and they stayed at Pax Lodge, one of four world centers for Girl Guides and Girl Scouts. They came back feeling like citizens of the world. Nothing else in my daughter’s life did as much to help her set big goals and learn to achieve them as the cookie sale."

But unlike boys, girls are seldom encouraged to highlight their own accomplishments.

Women haven’t been trained or inspired to talk about their own leadership development. A lot of them believe that if they do talk about it, no one will listen.

If we are to inspire girls toward leadership, we need to help girls change the way they see their own potential. Girls are growing up in a society that belittles their skills, their intelligence and their abilities by telling them over and over that the only things about them that really matter to anybody are their looks and their sexuality.

So what? Why should we care?

We should care because the message this stuff sends, regardless of how you feel about teen sexuality, is that girls are to be seen as sex objects first. If that’s how we’re teaching teenage girls to see themselves, it’s no wonder they seek confidence in how they look and how desirable they are, above all else.

"Today’s girls view being sexy as the ultimate accolade," says Carol Platt Liebau, political analyst, commentator and author of "Prude: How the Sex- Obsessed Culture Damages Girls (and America, Too!)" (Center Street, 2009). As a result, girls too often think the only way they can receive admiration is through promiscuity and sexual aggression.

What about admiring girls for expanding their horizons, growing in self-awareness, setting goals, using their intelligence or taking on projects that help others? We don’t see much encouragement for those values coming from our society’s center, or its top or its grassroots.

And if girls don’t absorb those values as adolescents, it’s going to be difficult for them to model those values when they become adults and parents.

Would you like to Send Along a Link of This Story?
https://womensenewsp.wpengine.com/story/leadership/111022/girl-scouts-cookie-sales-cultivate-young-leaders

Kathy Cloninger is the CEO of Girl Scouts of the USA and a Women’s eNews 21 Leader 2010. She serves on boards of the National Human Services Assembly of the National Council for Research on Women, American Humanics, and Leadership 18. She was named an NPT Power and Influence Top 50 by the NonProfit Times in 2007, 2008 and 2009.

Girl Scouts of the USA:
http://www.girlscouts.org 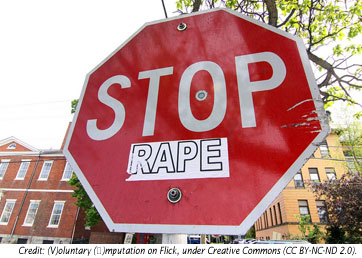 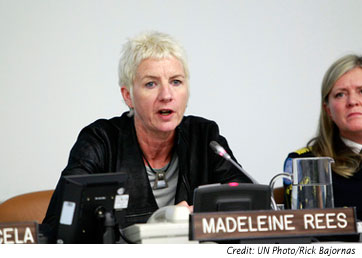