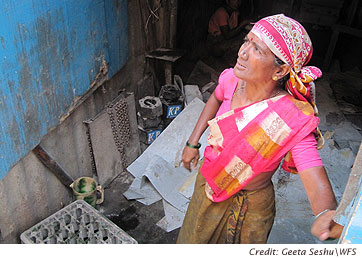 Female “ragpickers” in Mumbai are no longer what their name suggests. These days, many are in collectives and trying to find a better deal in the recycling industry. But it’s not easy when government business mandates on their behalf go ignored.

Then she and other women who work as the city’s "ragpickers" could have a "plastics bank" for the wastes they go around collecting from the streets.

They would also have a place to sort out their hauls in peace, away from police officers who demand bribes for letting them use street corners and other public locations.

Scores of women are on the move here, looking for every bit of waste that can be bought by traders and recycling companies. They forage through streets, housing colonies and business districts.

"If women gain the knowledge of this business they can become owners instead of only being the gatherers of all this garbage," says Kamble, head of the Dharavi advocacy project for ragpickers in Mumbai.

Acorn India, which launched the Dharavi project for ragpickers in 2008, now counts 500 members.

"At the moment, we have only given them identity cards and run programs for their children. We are exploring the situation, seeing how best we can help them," says Vinod Shetty, Acorn India’s director.

But moving up won’t be easy even if Kamble gets her warehouse.

Scrap is a sharp-elbow business in a city where consumption is rising fast along with the demand for recycled materials.

One advocacy group for ragpickers is Parisar Bhagini Vikas Sangh, launched in 1997. It now claims more than 3,500 female members across Mumbai and Pune. Its cooperatives collect garbage from housing societies, hospitals and malls.

But Sunita Patil, an advisor to Parisar Bhagini Vikas Sangh, says buyers of dry waste have begun approaching malls and hospitals to pick up the waste directly, bypassing their female collectives.

One mall in Ghatkopar recently terminated a ragpicker collective’s contract for garbage collection, displacing the women. Patil says the outfit jealously guards its new turf. "They have their own security guards and the women are not allowed to bring garbage out."

Government requirements that nongovernmental groups be afforded stakes in the recycling process are not implemented, Patil says.

But Kamble is still hoping to change the way of life for her group. She says there are around 107 kinds of plastic waste that only an A-1 "karigar," or government-classified skilled worker, can determine the correct value of.

Kamble thinks ragpickers can be trained to know these values. She also thinks female ragpickers can be taught how to negotiate a good deal. One basic necessity will be a safe space for child care while they’re out in the streets sifting through garbage.

But it’s a long way from here to there.

Ragpickers are a stigmatized group at the bottom of an ad-hoc industry of garbage.

Kamble says they are routinely harassed by city officials who regard them as a nuisance and police often require a weekly bribe to let them use public locations for sorting out their collections.

The work is also unhealthy. Kamble struggles with asthma. Many women suffer skin and respiratory infections.

Kamble says if women can establish their own sorting space they can figure out how to deal directly with recycling plants.

Thousands of Tons of Trash Daily

A big city such as Mumbai generates thousands of tons of trash a day, half of which is collected by the municipal authority. The rest is left to private enterprise.

Some waste goes to a dumping ground on the north-eastern outskirts of the city. Dry waste–huge amounts of plastic, paper, glass, electronics and metal–go to scrap recycling centers.

Ragpickers’ payments are not studied, but a ragpickers’ sale of 10-cents worth of plastic to a middleman might earn him 15 cents from the next point on the supply line. The end-point recycling facility might pay 25 cents or more than double what the ragpicker makes.

The waste-reuse chain starts with sorting plastics by such things as color, hardness or quality. Factories crush, pulverize and convert the material into small plastic pellets that become the raw material for making toys, bottles, caps, bag handles and so on.

A ragpicker can hope to make between 60 and 85 cents an hour. That’s a low wage, but better than the 30-cents an hour earned by workers in formal garbage-collection warehouses on nine-hour shifts, from 9 a.m. to 6 p.m., with an hour off for lunch.

Sharada Jogandale is employed in a crushing unit in Dharavi, the city’s largest slum. She wants to leave her job for something more lucrative. The long hours, the dust and heat of the airless unit and the supervisor who barely allows them a break has aged her beyond her 25 years.

Jogtin, who works in another crushing unit in Dharavi, wants out as well. Workers have no safety equipment, no gloves, no masks and no shoes. While this reporter was at the unit, Jogtin asked a supervisor for a bit of soap to wash her hand covered with grease before she went for her lunch break. He refused, saying he would only give her soap at the end of the shift.

Would you like to Send Along a Link of This Story?
https://womensenewsp.wpengine.com/story/environment/110512/mumbais-ragpickers-vie-better-recycling-niche

Geeta Seshu is an independent journalist and media analyst based in Mumbai, India. 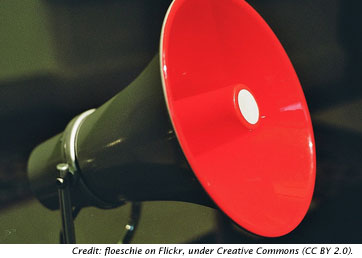 Cheer Her Rapist? Let’s Make Noise Over This 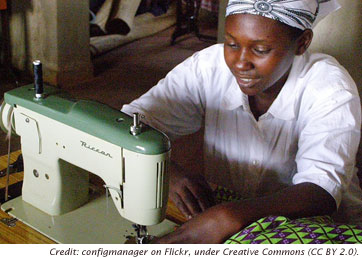 Microcredit Skeptics Deserve a Turn in the Limelight