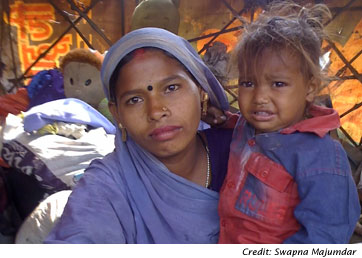 A huge portion of Indian female teens from impoverished families are getting married off and giving birth while malnourished, helping to explain why India has the highest number of maternal deaths in the world. A few here find a way to beat the odds.

NEW DELHI (WOMENSENEWS)–As soon as Vanita turned 13, her family stopped her from going to school. Instead, she was made to accompany her mother to nearby houses for domestic work while her father looked around for a suitable groom.

Had it not been for intervention by the Centre for Health Education, Training and Nutrition Awareness (CHETNA), a nongovernmental organization working in the slum where Vanita lives, she would have been among the 43 percent of adolescent girls in India who are married off before the age of 18. The organization, based in Ahmedabad, Gujarat, works to improve the health and nutrition of children, youth and women, including socially- excluded and disadvantaged groups.

Only Bangladesh, Niger and Chad have higher figures of adolescent marriages, according to UNICEF’s report on The State of the World’s Children 2011, released Feb. 25.

This high incidence of adolescent marriage both robs adolescents of their youth and deprives them of opportunities, says Karin Hulshof of UNICEF India.

"Girls in the age group 15-19 who marry early are most at risk of being caught up in a negative cycle of premature child-bearing, high rates of maternal mortality and child under nutrition," Hulshof said.

The UNICEF report, which focuses on adolescents, finds that despite its rapid economic growth, India has not been able to significantly redress gender disparity.

India, which was ranked 119 out of 189 countries in a U.N. gender inequality index in 2010, has been particularly lagging in the area of female teens’ nutrition.

A prime indication of this is anemia, or low hemoglobin levels, which can easily be corrected by proper nutrition. While 30 percent of adolescent males in the country are anemic, the UNICEF study finds that rate is almost double among female teens.

More than 22 percent of married adolescents in India give birth before they become adults. But with 56 percent of female adolescents being anemic, it increases their risk of maternal death and morbidity rates.

Main Cause of Maternal Mortality

Anemia is the main direct cause of maternal mortality with 6,000 adolescent Indian mothers dying every year.

More women die in India due to childbirth or pregnancy-related causes than anywhere in the world.

India–home to the world’s largest national population of adolescent girls–also has the dubious distinction of having the highest number of underweight girls in the world.

Hulshof said no single intervention can change this, but improving teens’ access to an array of information, skills and services could save many lives.

Vanita was able to persuade her parents that she could earn more by gaining skills at the adolescent empowerment project, run free by the nongovernmental organization. Here, she improved her reading and writing skills, learnt about women’s rights and sexual and reproductive health issues, including menstruation, conception and contraceptives, and was taught about the health implications of early marriage and pregnancy. She used this knowledge to convince her parents that marriage could wait until she completed her education and became economically independent.

Seeing her leadership skills, a year later CHETNA gave Vanita the responsibility of teaching what she’d learned to other young women in her community. Although she received a small honorarium for doing this, it was not the money that inspired Vanita to keep going.

One of her big efforts has been to debunk some harmful myths about sexual and reproductive health and to openly discuss menstruation, a topic that is still taboo in many parts of the country.

One big step forward was getting some of her peers to dry the cloth that they use during menstruation in sunlight to help sterilize it.

Vanita said the discussions were also helping young women challenge deep-rooted discrimination. Menstruating women, for instance, are widely considered impure during their periods and are prevented from entering the kitchen and religious places during that time of the month.

Now, Vanita and many other girls have stopped following that traditional practice.

Would you like to Send Along a Link of This Story?
https://womensenewsp.wpengine.com/story/reproductive-health/110318/indias-maternal-deaths-tied-teen-moms-anemia 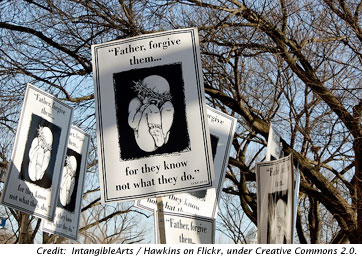