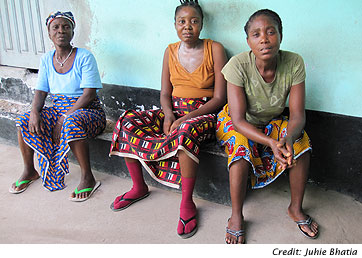 MONROVIA, Liberia (WOMENSENEWS)–A small group of reporters huddled around Roseline Broh, a nurse midwife supervisor, at the entrance to the labor ward at Redemption Hospital here. The facility provides free services and some of its 200 beds hold as many as three patients.

The group was suddenly pushed aside as emergency workers rushed past, carrying a pregnant woman on a stretcher. The woman, covered by only a sheet, was having a seizure.

When asked if the woman would survive, Broh’s somber expression contrasted with her cheery scrubs, which were patterned with rosy-cheeked smiley faces, sheep and hearts. Broh said she wasn’t sure.

Between 400 and 425 pregnant women come through the hospital’s doors each month, said Broh. Two of those women die every month.

The patient having a seizure typifies many of the hospital’s expectant mothers, said Melvin Johnson, Redemption Hospital’s nursing coordinator. “Lots of mothers stay home until they’re in critical condition.”

To help lower the country’s high rate of maternal deaths, the government of Liberian President Ellen Johnson Sirleaf has welcomed life-saving projects and asked for regular updates on the results.

One of the projects, aimed at shortening the distance between expectant mothers and health facilities, begins this week.

The first of seven planned “maternity waiting homes” in Bong County, in north-central Liberia, is scheduled to open its doors. The homes are being built near clinics staffed with qualified health professionals.

The four-roomed structure–with an outside bathroom, kitchen area and screened porch–can house up to eight women. Any woman may check in for up to three weeks before her expected delivery date. The focus, however, is on women in riskier groups, such as those in their first pregnancy, those with suspected complications or those who’ve had more than five births. Women with serious complications will be sent to the hospital instead of staying at the home.

The home will be run by a traditional birth attendant who will encourage communal cooking and teach the women about their health, family planning, exclusive breastfeeding and birth spacing.

“Family planning is a component,” said Laura O’Hara, senior health program coordinator in the Monrovia office of Africare, the nongovernmental organization behind the project. “If you give women a choice and the supplies needed for choices in a country like this, you can see decreases in maternal mortality by 20 percent. Birth spacing occurs, women have choices and women and babies are healthier. It’s one of the most significant things you can do.”

Six more maternity waiting homes are planned for other parts of Bong County, the part of Liberia where patients must travel the furthest to reach a facility, says O’Hara. The second home should be ready by the end of the month. O’Hara says she hopes all the homes, which are being funded by USAID’s Child Survival Innovation Grant, will be built by the end of April.

To help determine the effectiveness of these homes, researchers at the University of Michigan in Ann Arbor, Africare’s partner, will over the next four years compare the birth outcomes of women in the seven homes with women in six other areas in Bong County without such homes.

The project is also training 130 traditional birth attendants and certified midwives to use cell phones to text data about maternal and infant health to a central site, providing better data to work with in the future. That training begins in mid-February.

In a special November briefing with the Liberian president, Sirleaf told visiting reporters that the government knew it needed better data.

“Maternal mortality, we’re still working on that and trying to get better figures,” she said. “And as we try to expand services through rural areas, the midwifery program has been enhanced, because that’s part of the problem. Training midwives we think will also help to address that problem.”

Nurses and certified midwives provide much of the nation’s reproductive health services, as most of the health care infrastructure was destroyed and many medical professionals fled during Liberia’s 14 years of conflict. Over the past three decades, the number of practicing physicians in a country of 3.5 million to 4 million has fallen to fewer than 50 from over 800, according to a 2008 government plan to reduce maternal and neonatal deaths.

Remaining medical professionals have been left to contend with the health consequences of inadequate roads, broken bridges and a shortage of medical equipment, pharmaceutical supplies and health facilities. For expectant mothers, this can mean a walk of seven or eight hours to the nearest health clinic, according to the 2008 report.

“Pregnant women die everyday,” said Amanda Slongon, a member of the Integrity Club, a youth group that fights corruption in Gbarnga and surrounding areas in Bong County. “If a woman is in pain there’s no car to help her reach the clinic; before she reaches the main road she is gone. In the hospital, you aren’t able to find good drugs. Nurses don’t have a good salary.”

This has resulted in Liberia having about the eighth-highest maternal mortality rate globally, said Randolph Augustin, health team leader at USAID in Monrovia. The two leading killers: Postpartum hemorrhage and eclampsia.

And the problem has been getting worse, with 994 deaths per 100,000 live births in 2007, according to Liberian government figures. That’s up sharply from 578 deaths per 100,000 births in 2000. Some of this increase may be attributed to improved data collection, said Augustin, adding that the latest 2007 figures actually reflect information collected during the civil war, which ended in 2003.

Other contributors to this high death rate are complications related to unsafe abortions–a procedure that’s illegal in Liberia–and teen pregnancy. About 4 out of 10 female teens ages 15 to 19 have children, says Augustin, and they’re often too young to carry the pregnancy and don’t follow proper care.

All of these complications are potentially riskier in Liberia, since many deliveries take place at home and are overseen by traditional birth attendants, who, while very powerful in the community, can lack the skills necessary for safe deliveries.

“Most (pregnant women) believe in traditional things, such as herbs for pregnancy, leaves and drugs they rub on their belly,” said Hawah Sarnor, the supervisor of pediatrics at Redemption Hospital. “They remain at home for the delivery and do traditional ceremonies for complications instead of coming to the hospital.”

Still, Augustin says there is political will and that the government’s involvement in lowering the high death rates is a positive sign.

“There’s a strong interest to understand what’s going on,” he said. “Having the president actually ask for weekly updates for these deaths points to the highest level of commitment. Now the ministry needs to figure out how to channel that commitment and see results.”

Juhie Bhatia traveled to Liberia on an IRP Gatekeeper Editors trip organized by the International Reporting Project (IRP). She is managing editor of Women’s eNews.