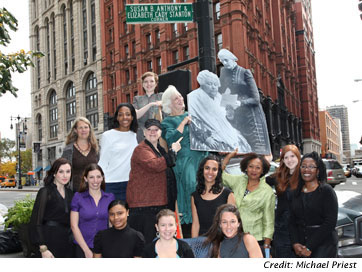 Worried About This Generation? Don’t Be!

Women’s eNews has relied heavily this year on a group of talented, unpaid interns. Their generous support and dedication has made almost every aspect of our operation possible. Rita Henley Jensen, editor in chief, says thanks.

(WOMENSENEWS)–Tonight will be a very special evening at Women’s eNews. We will host our annual holiday party for board, staff and freelancers, but with a new special celebration of thanks for the younger women you are about to find out about.

Board member Holly Atkinson will present small gifts to the Women’s eNews interns who have foregone any sort of payment for their work this year, labor that is simply invaluable. Faced with the toughest job market in generations, they found the means and the determination to be able to donate their time on behalf of delivering the news to women and those who care about women.

Without them, Women’s eNews would have much less to celebrate today, and, I believe, as would our readers.

One of the larger decorations on the tree will be a photo in hand-made frame. The image is that of the Women’s eNews’ team gathered earlier this year under the nearby street sign commemorating the place where Susan B. Anthony and Elizabeth Cady Stanton published their newspaper in the 1860s.

A former intern, Kelly Lauturner, volunteered to make the decoration as we were putting up the tree in our office last week. She’s like that, Kelly is. From Rockland County, N.Y., and a recent graduate of Marist College, she began her marketing internship at Women’s eNews at the end of January. She worked with us for five months and did whatever was needed, including pitching in to help the editorial department.

Without pay, she showed up on time, cheerful and ready to work, writing press releases, tweeting our news stories and updating our Facebook page; helping us grow our audience by using the latest and most popular social media. She was able to help us put up the tree because she landed a job with the nonprofit that shares our space: The Beverly Willis Architecture Foundation. Thank you Kelly!

On March 7, Touline Habake arrived for a party at WeNews’ office to celebrate the publication of Caroline Firestone’s book on women in Afghanistan, after seeing the event posted on Idealist.org.

Touline has been here since.

Touline let us know during the Firestone party that she had been laid off from her job in real estate accounting and was looking to make a switch to the nonprofit world. She wanted meaningful work that would challenge her, she said. She added that her family was from Syria.

I asked if she knew that Women’s eNews has an Arabic version and did she happen to speak and read Arabic? Yes, she said, while warning us she was no expert. I set up an interview later that week and Touline offered to work as a volunteer for six months. She now is on staff as a development associate and our resident Arabic speaker. Thank you Touline for helping us raise funds, apply for grants and redesign our Arabic site!

Marketing is to news Web sites as jelly is to PB and J sandwiches. What would be the use of all the reporting, editing and posting the editorial if no one else read our amazing content? In June, Amy Rubinson, a recent graduate of State University of New York, New Paltz, with a degree in women’s studies and public relations, joined the Women’s eNews crew. She quickly came up to speed on how to maintain our social networks, help promote events in our space and use the camcorder to make a video blog. We suddenly found ourselves without a marketing director for three months. Amy winged it and in August, on Women’s Equality Day, managed the live streaming of a documentary and discussion while tweeting and managing the film projector.

"In my time here, I came to see how many people depend on Women’s eNews for their daily news," Amy said. "It has been wonderful to help bring that to our readers and it solidified my passion for women’s issues."

Late in June, Angela Dallara, a recent graduate of the State University of New York at Geneseo, near Rochester, a political science major, saw the Women’s eNews ad for an editorial intern on Idealist.org. Those spots were filled by the time we interviewed her, but we persuaded her to take on the support work for the Women’s eNews’ history walk https://womensenewsp.wpengine.com/openingtheway . Working two days a week, she corralled prominent women to come midday to a nonprofit television studio to record the words of the 21 women featured on the tour. Visiting 21 sites between Chambers Street and Wall Street, the walk features 21 female heroes, from Susan B. Anthony to the women among the first responders on Sept. 11 who died in the line of duty.

Each of the 21 changed New York, the nation and the world. And those who recorded their words–from activist author and actor Kathleen Turner to Brenda Berkman, the city’s first female firefighter–were selected to represent the continuous stream of the women’s movement eroding the barriers to equality and equity.

Angela not only helped with the personal interactions that went into the recordings she edited them all, posted them all on our Web site and thanked all the participants. Not a single recorder expressed any annoyance with Angela; a true triumph of good organization and good communication.

Angela is still donating her time on the project and has committed to staying until June. Women’s eNews would simply not have been able to create the walk without her. Thank you Angela!

Then came our two editorial interns, Colleen Flaherty and Mary Kate Boylan. They have both worked for Women’s eNews to earn college course credits and provided the core of our 2010 election coverage. Both went beyond the call of duty to deliver compelling election coverage on a tight budget. They produced story ideas, scored important interviews and provided thoughtful reportage throughout the campaign  https://womensenewsp.wpengine.com/story/campaign-trail/101103/elections-put-first-women-color-in-governor-posts .

Wisconsin native Colleen Flaherty came to New York looking to become a reporter. She came to Women’s eNews while a senior Minnesota State University, Mankato. She applied for the fall internship because she appreciated our in-depth journalism and has always been interested in women’s issues. "I have never seen a publication like it," she says. The internship provided "a lot of room to grow and the right amount of help," she said. Thank you Colleen!

Mary Kate Boylan, a junior at Manhattan College in the Bronx, heard about us through our editor, Corinna Barnard, who lives near the college and has established a collegial connection with its communications-journalism department. Mary Kate told Corinna she was attracted to our site because of her interest in women’s issues and journalism. She gave Women’s News a full day on Tuesday, half a day on Wednesday for three months, between Sept. 14 and Dec. 14. She said her experience with WeNews opened her eyes to many women’s issues and strengthened her commitment to journalism, and the necessity of raising awareness about gender issues. Thanks Mary Kate!

If you would like to make a donation in the interns’ honor and to support the next generation of Women’s eNews interns please go to https://womensenewsp.wpengine.com/donation

Would you like to Send Along a Link of This Story?
https://womensenewsp.wpengine.com/story/commentary/101215/worried-about-generation-dont-be

2 responses to “Worried About This Generation? Don’t Be!” 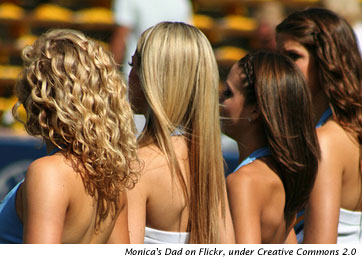 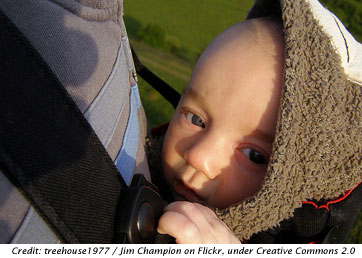 Guys in Snuglis Do the Real ‘Manning Up’