Women’s eNews announces today the 21 Leaders for the 21st Century 2011, a remarkable array of talent and determination that renews our optimism about what will be accomplished this year and for years to come.

(WOMENSENEWS)– Women’s eNews 21 Leaders for the 21st Century 2011 are outstanding examples of the creativity, dedication and innovation of the leadership working to improve women’s lives.

The Women’s eNews board and staff thank you, our readers, for bringing to our attention 200 nominees, all of whom should indeed be honored. It was an enormously difficult task to winnow the list to the 20 women and one man who are exemplars of the creativity, dedication, resourcefulness and commitment that it takes to improve the lives of women and girls.

Join us in congratulating those who have made 2011 a better year for all of us.

The rights of lesbians, immigrants, women of color and the disabled tend to get the least attention, even as they often make do with fewer resources and rights that others routinely enjoy. These extraordinary leaders spend each day to right this wrong.

Katherine Acey was the first full-time employee 35 years ago of Astraea Lesbian Foundation for Justice. She built the organization into a powerhouse that provides financial support to lesbian-led, transgender and progressive groups. Under her leadership, the group has provided grants to secure human rights at home and abroad.

Michelle Brané advocates for immigration issues that affect undocumented women and children. As director of the detention and asylum program at the Women’s Refugee Commission, she fights for health care, parental rights, sexual assault prevention and safe housing.

Alexine Clement Jackson made her career as a volunteer. Her activism has spread over several decades and numerous organizations. As chair of the board of the Susan G. Komen for the Cure, she advocates for gender and racial equity, currently spreading the message of early detection and mammography to African American women, who have a lower incidence of breast cancer yet higher mortality rate. She also has encouraged more research into triple-negative breast cancer, a form of the disease that strikes younger African American women and does not respond to most existing treatments.

Judith Goldberg empowers women with disabilities by offering compassion and wellness training. She began her work with disability rights in college and has lost none of her drive. In 1998, Goldberg joined the Initiative for Women with Disabilities Elly and Steve Hammerman Health and Wellness Center. The program now offers a full range of health care and wellness strategies, including an empowerment program for disabled women that provides services such as fitness classes, physical therapy and gynecological services.

As a teenage civil rights activist, Kathryn Hall-Trujillo spent much of her 10th grade on picket lines, in jail or in court. After her time working for the California State Department of Health Services, she saw a deficiency in care for pregnant women and founded the Birthing Project. More than 20 years later, over 10,000 babies have been born into over 90 Birthing Projects that emphasize the health of the expectant mother in the United States, Canada, Cuba, Ghana, Honduras and Malawi.

Valerie Oliver-Durrah founded the Black Women for Black Girls Giving Circle to undertake independent research about the issues confronting black girls in New York City. The circle issued its first groundbreaking report in the fall of 2010. Her aim is to create a strong cadre of black professional female mentors and donors through her organization. Oliver-Durrah also serves as president of the Neighborhood Technical Assistance Clinic, a nonprofit she founded to provide strategic direction, organizational oversight and technical assistance to grassroots groups and grant makers to help them effectively make a difference.

These leaders seek to bridge the gap between the genders through art, research, philanthropy and professional organizations.

Jessica Lagunas is an internationally-known artist who creates video performances and art installations to send a strong feminist message. Much of her art challenges generally accepted ideas about women, such as impossible standards of beauty or the myth that women should never grow old. She has had her women-centric art exhibited around the world and her work was included in "Imagining Ourselves: Global Voices from a New Generation of Women," published by the International Museum of Women in San Francisco.

Linda Basch’s work for women began in Nigeria, providing health care, and as a social policy specialist for the United Nations. Since 1996, Basch has served as executive director and president of the National Council for Research on Women, which now has 120 research, policy and advocacy centers focused on issues affecting women in several areas such as business, education and politics. Through research, Basch and her colleagues identify problems and possible solutions concerning gender disparities and inequalities worldwide.

Lauren Embrey takes issues that particularly affect women–including domestic human trafficking, leadership development and gender equity–and tackles them through strategic funding. As president and CEO of the Embrey Family Foundation, she directs grants and support to organizations such as Dallas’ Alley’s House, which provides services to teen mothers, Mosaic Family Services, which assists immigrant women and children, and Resolana, which provides incarcerated women the tools to enhance and rebuild their lives.

Toni Reinhold, an editor at Thomson Reuters, is president of the Newswomen’s Club of New York. She assumed the leadership of the club two years ago and has dramatically expanded its membership, its treasury and its relevance. She joined the club in her early 20s after a male editor refused to let her go overseas to conclude a story she had worked on for months because he felt it was a "job for a man." She fights against the very real glass ceiling in journalism by promoting the development and advancement of women throughout the news media.

Human sex trafficking, violence against women, harassment of all forms–these honorees act to eradicate these forces that limit women’s lives at home and abroad.

Kayrita Anderson has spent the last decade helping victims of sex slavery and preventing other women and girls from being subjected to it. Through her leadership at the Women’s Funding Network, she has allocated resources for research, prevention, intervention and education to end child sex slavery. Anderson also has pushed for more effective prosecution of those involved in human trafficking in her home state of Georgia. On a national arena, she continues to fight Web sites that sell sexual services and has led the way in shutting down the adult section of Craigslist, where women and girls were routinely sold for sex.

Attorney Beth Klein has been instrumental in the passage of anti-human trafficking laws in Colorado. There have been three prostitution rings broken up and prosecuted due to new legislation she drafted, which allows prosecutors to charge all those involved in prostitution rings, from the owner of a brothel to the person who transports sex workers into the United States. Klein’s law also permits prosecutors to seek compensation for victims. Klein also serves on the national steering committee of Demand Abolition, an advocacy organization that seeks to dramatically reduce the demand for sex trafficking and commercial sex in the United States.

The Ida. B. Wells Award for Bravery in Journalism goes to Kim Balin, Sianne Garlick and Laura Minnear, the trio behind "Pornland, Oregon," an hour-long documentary that became the most downloaded episode of "Dan Rather Reports." The subject is an expose on the alarming rate of sex trafficking within American borders. The documentary is now used as an educational tool by citizens, legislators and law enforcement officials and has encouraged heightened efforts in anti-sex trafficking.

Emily May is using technology to create a movement to combat the harassment of women. In 2005, May and a group of friends started a blog called Hollaback! The blog encourages women to post photos of harassers, along with stories about their experiences. Volunteers have now launched similar sites in Washington, D.C., and London. Hollaback! is also launching iPhone and Android applications.

Robina Niaz works full-time to assist Muslim women in New York who survived domestic violence to pursue their dreams of safety and independence. In 2004, Niaz founded Turning Point for Women and Families to focus on four areas–direct services and crisis intervention, youth development and leadership skills for young Muslim women, community education and outreach and addressing the scarcity of social workers in the Muslim community. In 2009, she was named CNN Hero and in 2010, she received the Local Hero by the Bank of America for her efforts.

Pamela Shifman is the director of Initiatives for the Women and Girls at the NoVo Foundation, funded by Jennifer and Peter Buffett. NoVo seeks to involve women and girls as primary agents of change in a global society. She directs initiatives that support activists combating gender-based violence and those helping girls in developing countries. She also launched the foundation’s 2010 project, Move to End Violence, which will work to end violence against women and girls in the United States during the next decade.

Maile Zambuto has spent nearly two decades working in the field of violence against women and children. A survivor of abuse and rape, she is currently the executive director of Joyful Heart Foundation, founded by Mariska Hargity, star of "Law and Order: SVU." The foundation is dedicated to helping survivors of sexual assault, domestic violence and child abuse. Under her leadership, the organization has directly served thousands of survivors and reach hundreds of thousands of individuals through public education and awareness, using online media, film, and print media. Her latest innovation is Heal the Healers, a program dedicated to supporting and restoring professionals serving survivors.

The work for gender parity and women’s leadership wouldn’t be complete without an empowered, educated and inspired youth. In order to encourage young people today to assume the leadership for justice and live up to their potential, these leaders go right to the source.

Beverly Bond made a career in the male-dominated field of DJing and saw the way women were portrayed in hip-hop and RandB music. She decided to combat the misogynistic attitude with her nonprofit organization Black Girls Rock! to empower female teens of color with mentoring and teaching them self-expression through hip-hop music. She is now expanding her organization internationally.

Jimmie Briggs founded the Man Up Campaign after years of witnessing the aftermath of rape and violence in war-torn countries as a journalist. The organization focuses on stopping violence against women and girls worldwide through its network of 18- to 30-year-old volunteers. He was named GQ Magazine’s winner for the "Better Men, Better World" search and organized the first Young Leaders Summit in 2010 during the World Cup in Johannesburg, South Africa.

Leah Castella developed the Women’s Debate Institute, a summer camp that teaches female high school students across the United States how to debate and capitalize on that skill. A prize-winning debater and partner in San Francisco’s law firm McDonough Holland and Allen PC, Castella founded the institute after realizing that too many female teens are intimidated by debate. The camp aims to empower girls by introducing them to a community of women in debate, instructing them in strategies to afford college, providing mentors for when they leave the camp and teaching them to be the better advocates for themselves.

Civil engineer Patricia Galloway is CEO of Pegasus Global Holdings, Inc., an international management consulting firm. She was elected president of the American Society of Civil Engineers in 2004, the first woman to hold the position in the organization’s 154 year history. She was appointed to the National Science Board in 2006, which advises the president and Congress on science and engineering policy. In these positions, she has mentored women interested in engineering and sciences by touring universities and offering the same advice to young women that she received in high school–and that led to her opting for a career in science.

21 Leaders for the 21st CenturySpain 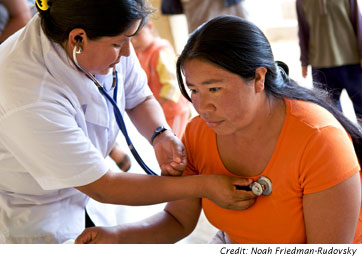