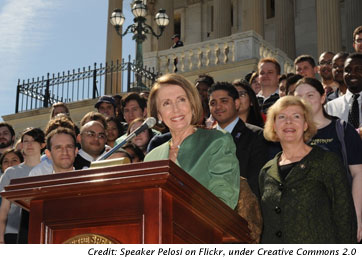 Lame-Duck Congress Has Women’s Work to Do

The lame-duck session of Congress starts today and Allison Stevens has a checklist of bills to pass before Nancy Pelosi yields the gavel to John Boehner as new speaker of the house. Paycheck Fairness comes first, with a Senate vote next week.

He, after all, is no Nancy Pelosi, who wore purple–the color of the suffrage movement–to her swearing-in in 2007. This is a staunch social conservative whose sharp, tailored suits and slicked-back hair has led some call him Capitol Hill’s "Don Draper," a character on the retro TV drama "Mad Men."

AMC’s hit show is set in the 1960s ad world where the action revolves around the guys because that was the social script back then. The show is giving young people an eye-opening look at the demeaning treatment of women that was a cultural norm not so long ago.

Congress needs to act now–starting today at the beginning of the congressional "lame duck" session–to halt any erosion of recent gains and finish work on pending legislation that would improve the lives of women and mothers.

If this work isn’t completed before the 111th Congress adjourns for the year, who knows how long it will be before a Speaker who so strongly supports women’s and mothers’ rights picks up the House gavel again.

One of the first bills on the calendar is the Paycheck Fairness Act, which would put women one step closer to the day when they earn equal pay for equal work. It has passed the House and could come up for a vote next week in the Senate, where it is a few votes shy of the 60 votes necessary to open and close debate.

More than four decades after the Equal Pay Act, women still earn only 77 cents for every dollar earned by men. As co- and sole breadwinners in millions of families, women, and their families, need the pay they deserve, especially during this Great Recession.

Debra Ness, president of the National Partnership for Women and Families, has said the bill would be "the perfect bookend" to a Congress that began with the enactment of the Lilly Ledbetter Fair Pay Act, which reversed a Supreme Court ruling that gutted pay protections for victims of discrimination.

One bill that has far to go before it is enacted–but that would do some of the greatest good around the world–is the International Violence Against Women Act, or IVAWA, which is focused on helping some of the 1-in-3 women worldwide who are beaten, raped or otherwise abused. The Senate Foreign Relations Committee was scheduled to mark it up before the elections, but lawmakers postponed the meeting as they rushed out the door to run campaigns.

"When Congress returns to finish up its 2010 business, we will have our best opportunity in years to pass the International Violence Against Women Act," Esta Soler, president of the Family Violence Prevention Fund in San Francisco, has said.

Another major item: ratification of CEDAW or the U.N. Convention on the Elimination of All Forms of Discrimination Against Women. The Senate Judiciary Subcommittee on Human Rights and the Law is scheduled to hold a hearing on the treaty on Nov. 18, which could be just the boost it needs to advance through the Senate (it does not need House approval) and into the hands of a supportive president.

Women’s rights activists routinely scold countries such as Iran for not signing CEDAW. But it’s a shameful open secret that the United States hasn’t signed either. Let’s get this unfinished business finished.

Back to the domestic front: a bill that would provide workers with paid sick days to care for themselves or their families if they fall ill has a long way to go. It hasn’t passed either chamber. I’m adding it to my lame-duck wish list because if it doesn’t advance now, it’s likely going to be stuck for a long time.

This bill is particularly important for mothers. After I filed this article to my editor, I sent her a note saying I’d be out of touch for a while because I had to take my young sons to the doctor. I have that flexibility. But most working mothers do not. They should not have to choose between caring for themselves or their children and losing income–or potentially even a job–when they or a family member falls ill.

Congress must also make sure that the $10 million set aside this year for competitive grants to help states pay for paid leave programs is appropriated. As the National Partnership for Women and Families has said, doing that would be a kind of "down payment" on policies to help employees balance work and family responsibilities.

It’s a long list for a short legislative window. But while lawmakers have the chance, let’s urge them to get it done.

Would you like to Send Along a Link of This Story?
https://womensenewsp.wpengine.com/story/momagenda/101112/lame-duck-congress-has-womens-work-do

Allison Stevens writes about women, politics, and motherhood for a variety of publications and organizations, including groups that promote women’s issues. 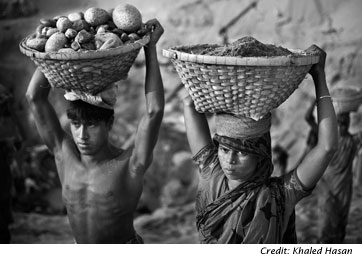