Few Care for the Undocumented With Breast Cancer

Undocumented women with breast cancer in Arizona depend on community clinics and sliding scale fees to get services. For many, financial barriers and fear of deportation delay or prevent treatment, echoing problems nationwide.

"When I found out, I was desperate because I thought I was going to die," said Flor, 46, an undocumented women who asked that her name not to be revealed. "I didn’t want to look for help because of my immigration status."

Instead she did what neighbors told her to do for breast cancer: drink tea from a yerberia–an alternative medicine store–and use homemade ointments to reduce the swelling.

When she arrived at the clinic two years ago, she was diagnosed with stage IV breast cancer, a form of advanced cancer that begins in the breast and spreads to other organs. This type of cancer cannot be cured, but it can be treated. For now Flor’s condition is stable, but she will never be in remission, where her symptoms disappear.

"When they come here it is often too late," said Yolanda Tufail, a registered nurse who works on chemotherapy infusion at the Maricopa Medical Center Oncology Clinic.

The clinic provides something of a rarity in Arizona: access to chemotherapy for breast cancer, doctor consultations and medicine at an affordable rate.

Undocumented women with breast cancer in Arizona have to rely on community clinics and sliding scale fees to get services. Help is not easy to find. When it does arrive, economic barriers and fear of deportation often stand in the way or delay treatment.

Latina women are more likely to be diagnosed at a later stage of breast cancer and have a higher mortality rate than white women, according to the American Cancer Society.

Undocumented women are more likely to forego treatment because of the costs involved with their care, said Mollie Williams, director of community health programs for Susan G. Komen for the Cure, a foundation that provides grants for services and education on cancer. "It is likely for these women to fall through the cracks."

Williams said in some cases service providers who receive grants from the foundation have reported that women were able to cover the cost of their mastectomy and initial care using their state Medicaid emergency insurance. This type of coverage is available to anyone, regardless of immigration status.

But breast cancer is a complex disease that requires an assortment of specialists, expensive medicines and follow-up care. Treatment could extend for up to five years and cost between $20,000 to $60,000.

In some areas community clinics can only diagnose the cancer, but there is no follow up.

"We are able to screen them, but there’s not much we can do after that," said Lucy Murrieta, an outreach community relations manager for the Sunset Community Health Center in Yuma County.

The center, near the Arizona-Mexico border, provides primary health services to over 6,000 agricultural workers, about 60 percent of whom are women. The center doesn’t inquire about women’s immigration status, said Murrieta.

In some cases the women have migrated legally, said Murrieta, but since they have been in the country for less than five years they’re ineligible for Medicaid coverage, available to low income people. When these women lose work after the farming season, they also lose their health insurance, making it difficult to obtain breast cancer treatment.

In Maricopa County, undocumented women who decide to seek surgery or need to receive chemotherapy treatment can turn to Healthcare Connect, a nonprofit in Phoenix.

The organization connects patients with hospitals and physicians that charge a discount rate. For example, the organization can find providers that will give chemotherapy treatment at 10 percent of its total cost.

But the organization has only one contracted surgeon who will perform mastectomies at a lower cost.

‘It’s Hard to Find a Doctor’

"It’s hard to find a doctor willing to do it," said Brenda Cardenas, a customer care coordinator for the nonprofit that serves 3,200 members, many of them undocumented immigrants.

Cardenas said patients are vulnerable and depressed when they come asking for help because doctors have already told them that they cannot get treatment. Some choose to return to their home country, usually Mexico.

Researchers recognize that there is limited data about how undocumented immigrants cope with cancer diagnosis and the challenges they face.

"The results were disturbing," said Maureen Campesino, a professor of nursing and a registered nurse who led the research at the Arizona State University’s College of Nursing.

She found that many of the women skipped treatment out of fear of losing their jobs, were denied services and some didn’t want to ask for help due to fear of being deported.

Campesino also found that some of Arizona’s enforcement immigrant policies further hampered women’s access to care. For example, a law that sanctioned businesses that hire undocumented workers caused many to lose the jobs that helped them pay for discounted services without insurance.

"It added insult to injury," she said. "Families were trying to pay for it on their own, but then the political environment created another barrier."

Not all states are as hard as Arizona for undocumented women with breast cancer. California, for example, offers insurance coverage to low-income undocumented women under an extension of the federal Breast and Cervical Cancer Treatment Program.

But expansion of this type of coverage at the federal level seems unlikely.

The leading health care reform bill in the Senate would prevent undocumented immigrants from purchasing affordable private insurance that they can buy now at high rates.

"It is counterintuitive," said Dr. Jane L. Delgado, president and CEO of the National Alliance for Hispanic Health, an organization based in Washington, D.C., that focuses on advocacy and research on Latinos. "We have to approach it as a simple insurance question. If we have programs to get insurance cheaper we should allow them to buy it."

The health care system is broken for everybody, but immigrants have a heavier burden to navigate it, said Sonal Ambegaokar, a health policy attorney at the National Immigration Law Center, with headquarters in Los Angeles, California.

"It’s really hard to think that we will pick and choose who gets to live or die because of their immigration status," she said.

Valeria Fernandez is an independent reporter that writes about immigrant communities in Phoenix, Arizona. 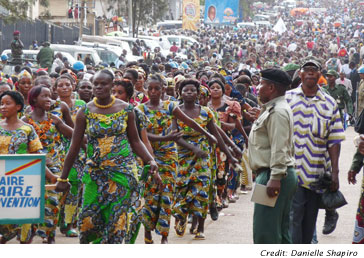 What Sex Is Your Crossing Light? Check the Mural