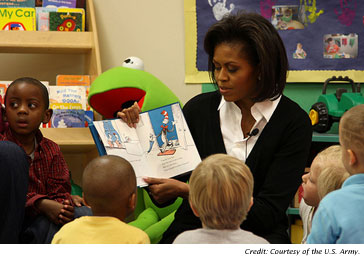 Michelle Obama Urged to Speak Out for Breastfeeding

Michelle Obama breastfed both her daughters and advocates are hoping she will use the platform of her anti-obesity campaign to promote breastfeeding and share her own experiences.

(WOMENSENEWS)–Michelle Obama breastfed her daughters Malia and Sasha and public health and maternal health activists are hoping she will explicitly endorse breastfeeding as part of her anti-obesity campaign.

Obama declined to comment about the role of breastfeeding in her obesity fighting initiative, despite the potential link between breastfeeding and obesity reduction. However, the White House has announced Obama, along with members of the President’s cabinet, mayors and other leaders, will hold a press conference Tuesday to unveil details of her obesity initiative.

"We have a dynamic role model in the White House, a black woman who gets the idea that she can go to work, be a lawyer and still provide milk for her baby," said Napiera Loveless, co-founder of MamaTotoMatema, a Cincinnati-based organization committed to educating and encouraging leaders and health care professionals to adopt different approaches to promoting breastfeeding in African American families. "She takes away the excuse."

Bettina Lauf Forbes, co-founder of Best for Babes, a nonprofit re-branding perceptions of breastfeeding in the news, popular culture and policy, agrees. "To turn breastfeeding into a cause that gets visibility, funding and backing, people think they need somebody like Michelle to shift perspective, for that tipping point to happen," she said.

Outside circles of top public health officials and what are known as lactivists–advocates for breastfeeding–most Americans remain unaware that Obama breastfed her daughters, now national symbols of healthy children.

Among African American women, where obesity rates are the highest in the nation, breastfeeding rates are the lowest. Breastfeeding has increased among black mothers from 12 years ago, when 36 percent of black infants were breastfed at some point to 65 percent in 2006. However, 40 percent of Hispanic mothers and 35 percent of white mothers breastfeed exclusively for the government-recommended six months, compared to 20 percent of African American women, the Centers for Disease Control and Prevention, or the CDC, reported in 2008.

"Michelle Obama breastfed," said Kirsten Berggren, a lactation consultant in Vermont and author of "Working Without Weaning: A Working Mother’s Guide to Breastfeeding." "Everyone wants her to come out and support breastfeeding."

Advocates like Berggren not only want Obama to acknowledge that she breastfed, but to also endorse breastfeeding. Studies show breastfeeding lowers the risk of obesity, cancer, and chronic diseases–many of which disproportionately impact African American women–in mothers, as well as helps protect children against a host of ailments, including respiratory infections, asthma and childhood leukemia.

Studies also indicate a positive link between breastfeeding and reducing the risk for obesity in infants and mothers, though the association hasn’t yet been proven.

"The evidence is remarkably consistent," said Katherine Shealy, a breastfeeding specialist with the CDC. "Breastfeeding reduces diabetes, metabolic diseases, heart disease and all these different issues intertwined with obesity."

Since the rise of the Obama family public profile, Michelle Obama has not championed breastfeeding.

But that may change.

Her movement to tackle childhood obesity, announced during the president’s State of the Union address, holds the promise of advancing the promotion of breastfeeding as a strategy to improve the country’s health.

For one, the CDC will lend expertise and technical assistance to the first lady’s obesity-fighting initiative, officials at the agency say, and breastfeeding will play a part.

"There have been a number of attempts to try and get Michelle Obama on board with [breastfeeding promotion]," Laurence Grummer-Strawn, branch chief for the CDC’s division of nutrition and physical activity told Women’s eNews. "We have someone on our staff who is going to be working with her office over the next year on a number of issues related to childhood obesity. Breastfeeding is one of the things [our staff member] wants to take to her office and they are very open to that."

In addition, the U.S. Surgeon General Regina Benjamin, who launched a report about fighting obesity with Obama in late January, endorsed breastfeeding in workplaces, hospitals and communities, "as this practice has been shown to prevent childhood obesity," Benjamin wrote.

Obama’s obesity initiative comes at a time when breastfeeding advocates are intensifying their efforts to understand why African American women have the lowest breastfeeding rates in the country.

Last December, the CDC held its first national expert panel to investigate what health leaders can do about the relatively low breastfeeding rates among African American women, which dropped, along with breastfeeding among other women, when infant formula became a cultural norm in the 1950s.

"It is hard to explain to a young mother that formula is really not necessarily the best when society and advertisement is saying something else," said Terry Jo Curtis, founder of the Indiana Black Breastfeeding Coalition in Indianapolis.

"In Ohio, not even half of the black mothers are breastfeeding," the 33-year-old African American mother of five said. "That explains why diabetes and obesity is so high in black communities. Why our babies are not as healthy as others."

In lieu of Obama’s public endorsement, a community of breastfeeding activists have pinned their hopes to a do-it-yourself linking of her to breastfeeding by finding references on the Internet. They say Obama’s breastfeeding story has the power to validate a movement to normalize breastfeeding.

"No one as high profile as Michelle has come out and spoken positively about their breastfeeding experience," Berggren said. "By not speaking about it, we confirm the tacit assumption that breastfeeding is somehow dirty or private or not normal."

Piecing Together a Picture

One day Loveless scavenged the Internet for hours, looking for information about Obama’s breastfeeding experience, which she said could be used to encourage mothers she works with.

One article is the 2007 People Magazine story, which reported that Obama was "still breastfeeding her newborn second daughter," when she interviewed for an executive position in Chicago.

There are a few more news references, all posted in different blogs and forums, forming a collage of Obama breastfeeding items.

"Michelle Obama really understands mothers need maternity leave to be able to breastfeed and go back to work," Shealy said, citing a 2008 article from the Toronto Star in which Obama reportedly said that as soon as you learn how to breastfeed, "you’re back at work."

One find made Loveless particularly happy. The passage is in Barack Obama’s 2006 "The Audacity of Hope," in which he says:

"While Michelle was getting some well-earned sleep, I would stay up until one or two in the morning, changing diapers, heating breast milk, feeling my daughter’s soft breath against my chest as I rocked her to sleep, guessing at her infant dreams."

3 responses to “Michelle Obama Urged to Speak Out for Breastfeeding” 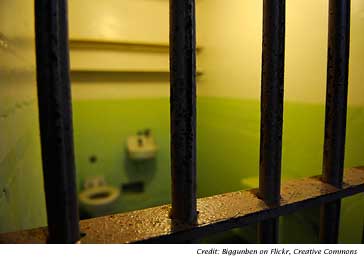