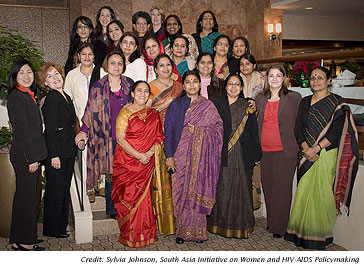 South Asian women from three spheres–journalism, politics and advocacy– recently planned a coordinated attack on HIV-AIDS among women. Their focus is on transportation, property rights and education.

About 20 female parliamentarians, journalists and staff members of nonprofit groups in South Asia left Washington, D.C., with strategies they believed could reduce the current specter of women losing their homes after caring for spouses who died of AIDS, as well as aiding HIV-positive women who are unable to reach rural clinics and teens who aren’t aware of how to prevent the infection.

They were also carrying with them a loose agreement to work together within their region to stop the rising spread of HIV and AIDS, particularly among monogamous women.

Once back home, they plan to curb the spread of the HIV virus among women by subsidizing transportation in rural areas, reinforcing property rights and teaching sexual education in schools.

The women–from Bangladesh, India and Pakistan–came to the United States for the South Asia Initiative on Women and HIV-AIDS Policymaking.

The program had two specific goals.

The Bangladeshi, Pakistani and Indian members of parliament were to propose a regional strategy to improve the lives of women and girls affected by HIV and AIDS.

Representatives of each country were also to craft an action plan to confront the epidemic. Ninety percent of women living with the virus in Asia contracted it from their husbands or romantic partners, according to United Nations statistics.

"The majority of women at risk for HIV are only at risk because of their husbands," said Dr. Robert Bollinger, a professor at Baltimore-based Johns Hopkins Center for Clinical Global Health Education. Those husbands engage in behavior–having unprotected sex with prostitutes or other men or injecting drugs–that leads to an increased chance of contracting the virus.

Though less than 1 percent of the female population in South Asia is HIV positive, many women are at risk because they are unable to protect themselves from transmission due to a variety of factors, including misinformation about sex, sexual violence and gender inequality.

"Reducing their risk is a real challenge because those women are completely disenfranchised; they have no control over their reproductive health," Bollinger said.

The week-long session, which ended Dec. 10, was sponsored by three Washington-based women’s advocacy groups: the Center for Women Policy Studies, The International Women’s Media Foundation and the Centre for Development and Population Activities.

Dr. Donya Aziz, a member of Pakistan’s National Assembly, told Women’s eNews how she and her Indian and Bangladeshi counterparts plan to tackle the epidemic regionally.

Since the three countries have a tradition of women in powerful leadership positions, the group will appeal to Sheikh Hasina, Bangladesh’s prime minister, and Sonia Gandhi, head of India’s ruling Congress party.

Once those two leaders take up the issue of women and HIV-AIDS, Aziz will then turn to the current male Pakistani leadership to also sign on to the cause.

Aziz and her partners in the Pakistani media and nonprofit community have also decided to help HIV-positive women living in rural areas access treatment.

When she returns to Pakistan, Aziz plans to talk to the minister of finance, who runs a new income support program. Aziz envisions a scheme where HIV-positive women in the program who live in rural areas will receive stipends to help them travel to clinics and pay for medication.

The Indian participants also came up with a narrow, though potentially effective, approach to helping infected women. They want to enforce property rights for women.

Women living with HIV and AIDS in India routinely face discrimination because there’s a stigma of immorality and sexual promiscuity attached to the disease.

This stigma can lead to a loss of property. Many HIV-positive women who nurse their husbands until they die of AIDS are then thrown out of their in-laws’ house, says Teresa Rehman, an Indian journalist. The practice, according to Rehman, is against the law.

Rehman and her Indian colleagues from the initiative plan to contact lawyers who work on HIV and AIDS and enlist them to publish a brochure and set up a hotline to inform women about their property rights.

For Bangladesh, the women decided to target young people. The female politicians will talk to their allies in parliament about expanding sex education in schools. A United Nations survey in 2007 found that only about 22 percent of young men and women in Bangladesh correctly identified ways to prevent the sexual transmission of HIV.

Bollinger, who’s spent 15 years researching HIV-AIDS in India, says that if women’s advocacy groups rallied around combating the epidemic the way they’ve successfully tackled other problems, such as trafficking and dowries, they could help reduce risk and improve care.

"It’s a key women’s health issue and I would love to see this become a much more vocal and higher priority among women’s rights organizations," Bollinger said.

Leslie Wolfe, president of the Center for Women Policy Studies, said the meeting was significant for bringing together women whose professional spheres– journalism, politics and activism–often prevent them from working together.

"Our real goal is to create a safe space where women from these countries could come together to address the HIV-AIDS epidemic," she said. "Normally members of parliament are bombarded by civil society, nagging, lobbying pressuring, but they don’t get to work together as partners most of the time."

Back in South Asia, the three groups are often at odds as journalists hound politicians for stories and nonprofit advocates push lawmakers for political change.

"This is a very good forum to break the ice," said Rehman, referring to the quiet, carpeted meeting room of the Washington Court Hotel.

Julia Marsh is a Washington, D.C.-based correspondent. In addition to reporting for Women’s eNews, she covers domestic and foreign affairs for a Japanese newspaper. 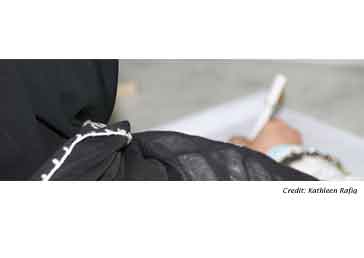 Afghan Women Write Their Own Stories