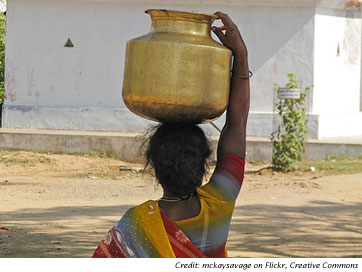 (WOMENSENEWS)–Knowledge has long been cited as the tool most needed to lower maternal mortality rates, but Global Water, a volunteer organization based in Oxnard, Calif., says what women in developing countries also need to combat this problem is water.

"Not having the proper amount of water on a daily basis puts stress on the body, which affects a woman’s life span," said Ted Kuepper, the organization’s executive director, in a telephone interview. "It also affects their ability to further their education and break out of poverty."

To help disrupt this cycle, the New York-based international reproductive health organization EngenderHealth is launching a fellowship program with Ashoka, an organization of social entrepreneurs with headquarters in Arlington, Va., to focus on improving maternal health in the world’s poorest nations. The initiative will concentrate on parts of the world with the highest maternal and child mortality rates, says Tim Thomas, senior advisor of the Maternal Health Task Force at EngenderHealth.

"The rates are highest in Africa and South Asia," he said in a telephone interview, but added that "we’re not committing to any particular countries at this point."

That’s because EngenderHealth and Ashoka–who plan to recruit 32 candidates through its Changemakers online competition–are seeking proposals that focus on applicants’ areas of interest. Those selected for the program will spend nine months working on a tangible solution to a specific maternal health challenge, starting in September 2010.

Water use has grown at more than twice the rate of the world’s population over the past century, mostly for agricultural purposes, according to the 2009 United Nations Millennium Development Goals Report. This has left 884 million people at risk for–or already facing–a water shortage. The situation poses a huge threat to maternal health, but Thomas said it’s not the only contributing factor.

"There’s a panoply of factors that contribute to maternal mortality–everything from (the drug) misoprostol not being available to treat postpartum hemorrhage to the insufficient distribution of magnesium sulfate for preeclampsia in rural clinics," he said. "This is where research is needed to coalesce and bring consensus, and that’s one of the jobs of the task force."

Grace Lusiola, director of the EngenderHealth office in Dar es Salaam, Tanzania, works in conjunction with the government on strategies like the One Plan, a federal campaign unveiled in April 2008 to reduce maternal and child deaths. The campaign’s contributions to policy development include providing post-abortion care.

"Unsafe abortion is the leading cause of maternal death in Tanzania," Lusiola said in an e-mail interview. "We’re increasing the number of facilities at the community level where women who have had unsafe abortions can go for medical care. Being able to get emergency care locally and not having to travel (long distances) saves lives."

Another way to improve maternal health is through building latrines and hand-washing stations. Global Water assembles such facilities for elementary schools in rural areas, working with the Peace Corps to promote good hygiene and halt the spread of waterborne illnesses such as cholera, diarrhea, hepatitis and typhoid fever. On one visit to a village in Guatemala, Kuepper said, volunteers taught children about hygiene–despite lacking the basic tools.

"Those schools didn’t have any water, so they had the students pretend to wash their hands and brush their teeth," he said. "It was an amazing sight."

Still, good hygience practices are not common in many countries. A 2009 study published in the journal Health Education Research found that only 29 percent of 802 women surveyed in Kenya washed their hands with soap after using the bathroom, often due to lack of time and energy. (Washing one’s hands with just water is the norm throughout the country.)

"Key motivations for hand washing were disgust, nurture, comfort and affiliation," wrote lead author Valerie Curtis of the London School of Hygiene and Tropical Medicine. "Fear of disease generally did not motivate hand washing," as 43 percent of the women polled felt that diarrhea "is a normal part of growing up."

Contaminated water is also commonplace in developing countries. The World Health Organization, or WHO, and the United Nations Children’s Fund issued a report in 2004 that found the definition of "safe water" varied from region to region. WHO has issued guidelines for maintaining water quality around the world since 1982, but leaves it up to each country to implement their own standards. Such inconsistency is why Global Water bypasses the government when it comes to installing water treatment systems.

"We’re trying to fill a void that’s been created by the leaders of the developing world themselves," Kuepper said. "There’s a real lack of concern among these leaders to take care of their own people."

The U.N. Millennium Development Goals Report indicates that at the global level maternal mortality rates fell by less than one percent annually between 1990 and 2005–far below the 5.5 percent annual improvement needed to reach the world body’s 2015 target. Of the eight Millennium Development Goals–U.N. benchmarks to reduce poverty and improve health–originally set in 2000, it’s the area that has seen the least amount of progress.

"Women’s health and empowerment is at the heart of all the development goals. I don’t think any of them can be achieved unless we scale up a full range of reproductive health services and policies for women in every part of the world," Thomas said. "There’s such great momentum around maternal health because the crux of women’s reproductive health and rights is the saving of lives of women who are dying needlessly because of pregnancy or childbirth."

Improving women’s access to clean water is directly linked to increasing their life expectancy. For example, a 2006 WHO survey found that women in countries such as Tanzania were only expected to live to the age of 51; one of the causes of death was consuming excessive levels of fluoride found in contaminated water. Those who do survive in countries with unsafe water have to deal with side effects like stiff joints.

"The body acclimates to some degree to accommodate the level of contamination in the water," Kuepper said. But he pointed out that such adaptation only applies to microorganisms like bacteria and viruses, not minerals like fluoride and arsenic. Since water contamination remains an environmental hazard to women and children in the world’s poorest nations, he doesn’t envision the development goals being fulfilled within the next six years.

"I don’t see anything on the horizon to fix the problem. There’s not enough funding efficiently being spent in water-short areas of the world," he said.

Latrice Davis is a freelance journalist based in New York.

One response to “Water Is Key to Reducing Maternal Mortality” 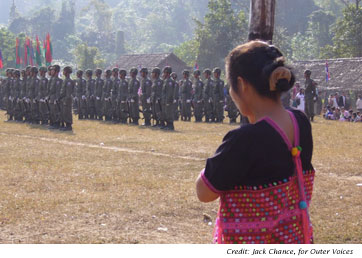