Katrina Evacuee Finds All Work and No Benefits

Michelle Castillo left New Orleans when Katrina came. After months of struggles, she’s settling in to a new life but finds that the storm has left her and thousands of others worse off. Fourth in a series about how one woman is rebuilding her life.

(WOMENSENEWS)–After looking for work for five months, Michelle Castillo landed a new job at the end of January and is counting her blessings.

Nine months after Hurricane Katrina swept away her old life, the New Orleans native is still struggling to make ends meet for her family.

She makes 30 percent less money than she did before the storm and hasn’t been able to return to the middle-class comforts–like a swimming pool in the backyard and hand-carved furniture–she once had. Yet the 41-year-old mother of two refuses to complain knowing that more than 400,000 of her fellow Gulf Coast evacuees remain without basic needs, such as long-term housing or employment.

“Our situation is not good, but it could be so much worse,” Castillo says of the family’s efforts to resettle in Orlando, Fla., where she, her children and her 68-year-old father came to live after being displaced last Aug. 29, the day their house in New Orleans East succumbed to flood waters.

Castillo is now working in the qualifications department of an Orlando-based debt consolidation company where she reviews credit reports and payment histories to help consumers lower interest rates associated with credit cards.

Her weekly salary ranges between $400 and $600 before taxes depending on the amount of commissions she makes. For every person Castillo qualifies for the program she receives $50. Her sign-up rate is the sole determinant of her salary every week. Castillo works 35 hours per week; all late afternoon shifts that keep her from spending time with her two children. Her schedule keeps her below full-time status and prevents access to benefits.

“The money is nowhere near enough. None of us has proper health coverage and I hardly get to see the children,” she says. “But I don’t want to bellyache, because this is only temporary until I find something better and at least we’ve got something that resembles a life again.”

Castillo’s family lives in a rented house. They have leased a car, have a weekly income and have relatives living nearby.

It’s a solid recipe for getting back to a normal life.

But monthly rent is $1,200 and the family received only $676 per month in rental assistance from the Federal Emergency Management Agency for the first three months of this year; the remainder came from Castillo’s salary. FEMA recently sent Castillo a letter saying she does not qualify for further rental assistance.

When Castillo pressed FEMA call center employees for an explanation of the cut-off she was told that because she signed a one-year lease FEMA considered her family’s housing problems settled. Castillo is appealing the decision.

At the state level, Florida officials re-qualified Castillo and her children for receiving Medicaid and food stamps this month, reversing an earlier decision to cut off all aid in January. The family of four now receives $326 a month in food stamps and has shared health care coverage that mandates Castillo must pay $118 a month up front before Medicaid kicks in.

Half Still Out of Work

Almost half of Gulf Coast evacuees or former evacuees remain out of work and the numbers are rising, according to U.S. Department of Labor reports over the last few months based on interviews with 1 million affected people over 16 years old.

While the national unemployment rate hovers at about 4.7 percent, the jobless rate for evacuees hit 34.7 percent in March, up from 22.6 percent in February. Even for those who have returned home, unemployment rose from 4.8 to 5.3 percent over the same period.

Even more sobering, the Labor Department figures do not include people living in shelters, hotels and churches. An end of FEMA payments forced residents of 20,000 hotel rooms to vacate at the beginning of March–some moved in with relatives while the majority moved into trailers or went to shelters–making firm numbers for this group hard to establish.

In another blow, FEMA officials announced in late April that of the just over 55,000 families who received a year’s worth of housing vouchers from FEMA in Katrina’s wake, nearly a third will be receiving notices that they no longer qualify. For the rest, they will now be required to pay their own utility bills and re-qualify for rental assistance every three months.

“All in all, I just think we are not being treated fairly,” says Castillo. “Officials keep saying they’re helping Katrina victims but every time you turn around they’ve put another hurdle in front of you.”

Unemployed Louisianans caught a break early on when the state activated the Unemployment Compensation Extended Benefits Program, partially funded by the federal government, which provides an extra 13 weeks of benefits beyond the 26 weeks normally allowed.

The emergency measure applied only for previously employed Louisianans whose initial 26-week benefit period was scheduled to expire between Oct. 30, 2005 and Feb. 25, 2006, which means even those who received the extension late in February will be cut off by the end of May. Castillo was receiving a $98 weekly payment before she found her new job in Florida.

As a group, few sectors of the Gulf Coast population over the past nine months have been hit as hard as single mothers.

In pre-Katrina New Orleans, 56 percent of all families with children under 18 years old were headed by single women, according to the Institute for Women’s Policy Research, a think tank in Washington, D.C. The median earnings for single-parent families in the city were $20,798 before the storm; 40 percent of those families were living below the poverty level.

The disaster, however, exacerbated the situation for many, including Castillo.

Relocation to environs untouched by the devastation of Katrina has proved no guarantee of relief as the areas into which thousands of families resettled–other Louisiana cities, Texas and Mississippi–rank as the worst places for women in terms of poverty, lack of health care and education facilities in the United States.

“For many of these women their situation was dire before Katrina hit,” says Dr. Avis Jones-DeWeever, the institute’s study director. “That situation has hardly changed, every single day continues to be a struggle.”

“In the beginning I used to get extremely upset, scream and yell, but the only result was my blood pressure going up,” she says of the months following Katrina. “Eventually I came to realize that certain things are simply out of my control and we just have to keep fighting to get our lives back, because if we stop nobody is going to do it for us.”

Juliette Terzieff is a freelance journalist currently based in Buffalo, N.Y., who has worked for the San Francisco Chronicle, Newsweek, CNN International and the London Sunday Times during time spent in the Balkans, the Middle East and South Asia. 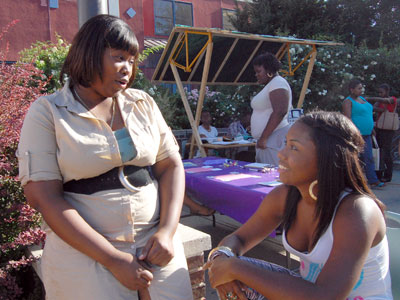