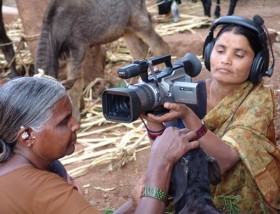 Ten years after the U.N. recognized that women’s participation in media was a critical area of concern, trail-blazers in rural India are telling stories from the margins of society. Fourth of a seven-part series on the Beijing Platform.

PASTAPUR, INDIA (WOMENSENEWS)–Chinna Narsamma of Pastapur village stood in ankle-deep water, surrounded by soggy, rotting plants, to tell the camera about crops damaged by heavy rain in the semi-arid area of the southern Indian state of Andhra Pradesh, where she lives.

That was three years ago and her video clip aired on the regional channel of Doordarshan, the state-owned, national television network, as well as on a private TV channel.

Narsamma belongs to a group of female reporters and editors who have sprung up from the margins of Indian society to report, for the past seven years, on conditions in the poor rural villages where they live and make a name for themselves as the country’s “barefoot” media.

In 1995 the Beijing Declaration and Platform for Action affirmed the importance of media for women’s empowerment. In 1997, women from 75 villages in and around Pastapur decided they needed their own media to express themselves, facilitate dialogue across rural communities, document and analyze local events and issues and convey information and ideas to the outside world.

They may not have heard of the Beijing Platform, but they obviously understood its logic. They were convinced that access to and control over media would help them and their communities.

A decade ago, these women faced multiple jeopardy as poor, illiterate, rural women from Dalit communities (former “outcastes”) making a meager living from farming in a semi-arid region. They had little access to the media even as viewers and listeners. Nearly 5,000 of them were, however, members of the sanghams, or village-level women’s collectives, associated with the Deccan Development Society, a 20-year-old grassroots organization based in Pastapur and Hyderabad that works with socially and economically disadvantaged rural communities.

Seven women completed a 10-month video training course created specially for them. They have since gone on to make over 100 films which draw, for subject matter, on their lives and concerns: food, work, social and cultural life.

Not only do they cover events and issues of particular interest and concern to their communities, which they say are rarely reflected in mainstream media, but they also use the familiar, local dialect that both they and their audience are comfortable with, rather than the formal version of Telugu (the language of the state) used by the mainstream media.

“There is a big difference between the films you make and the films we make,” Narsamma told a group of visiting urban female journalists earlier this year.

That difference is demonstrated in a short film, “The Sangham Shot,” that tells the story of this group of women and their approach to film-making. They spurn what they call the “patel shot,” which views subjects from above, affording the viewpoint of feudal landlords, also known as patels, and the “slave shot,” which views subjects from below. Instead they choose the “sangham shot,” face-to-face with the subject. “In the sanghams we are all equals,” explains Chinna Narsamma. “So we call an eye-level shot a sangham shot.”

One of their most significant films “Why Are Warangal Farmers Angry with BT Cotton?”
exposed the unhappy experiences of farmers in Andhra Pradesh who had experimented with BT cotton–a genetically modified variety promoted by an international conglomerate. Tracking the experiences of half a dozen farmers over the months between planting and harvesting, the women recorded their despair as the crop failed to live up to hyped promises. In a remarkable final sequence, angry farmers swore on film that they would never touch BT again.

In 2001 they established an independent, rural, women’s media collective, the DDS Community Media Trust, to help produce and promote their work.

The media collective, based in Pastapur, also has a radio facility in Machnoor village, which is run by three Dalit women. Although they have been making radio programs since 1999, they can only “narrowcast” them by distributing audiocassettes to eager village audiences.

This is because actual community broadcasting has not yet been legalized in India. At present the government restricts it to educational institutions and a couple of other categories into which these women’s video and radio groups don’t fit.

Ten years ago the Supreme Court of India affirmed that airwaves are public property. But India’s rapidly–and randomly–evolving media policy has not yet made it possible for these rural reporters to broadcast the programs and films they have been making for several years.

That may soon change. In December 2004 the Telecom Regulatory Authority of India, which oversees both broadcasting and telecommunications, submitted recommendations to the government on the possible licensing of community radio stations. With the Machnoor facility ready to begin transmission as soon as it acquires a license, the “barefoot reporters” of Pastapur are watching and waiting.

Ammu Joseph is an independent journalist and author based in Bangalore, India. 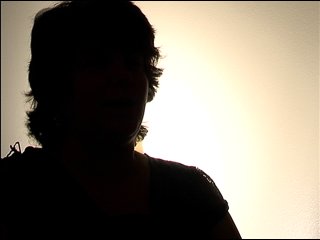