President Obama’s Nobel Peace Prize may overshadow winners of this year’s Nobel recognition. But many people are particularly pleased that four women were awarded Nobles this week. Carol W. Greider, a geneticist from John Hopkins University, and Elisabeth H. Blackburn, a biochemist at the University of California, shared the 2009 Nobel Prize in Physiology or Medicine, worth approximately $1.4 million. The third recipient was Jack Szostak, a geneticist at Harvard Medical School.

This is the first time that a science Nobel Prize has been awarded to more than one woman. Until today, eight women of the 192 previous recipients have won. The researchers received the prize for their discovery of a "protective cap" that prevents chromosomes from falling apart when cells divide, The Guardian reported. The research plays a vital role in the study of aging and cancer.

Ada E. Yonath from the Weizmann Institute of Science in Rehovot, Israel, became the fourth woman to win the 2009 Nobel Prize for Chemistry. She was awarded the prize for ribosome research, which is being used to develop new antibiotics, the New York Times reported Oct. 7. The other two winners of the chemistry prize were Venkatraman Ramakrishnan, from the M.R.C. Laboratory of Molecular Biology, Cambridge, England, and Thomas A. Steitz, Yale University, New Haven.

The fourth female recognized was Herta Müller, a Romanian-born novelist and essayist. She became the 12th woman–and the first German in a decade–to win the Nobel Prize for Literature on Oct. 8, the New York Times reported.

Shawanna Nelson made history Oct. 2 when a federal appeals court decided she could sue the Arkansas corrections officer who repeatedly shackled her to a bed while in the final stages of labor, Arkansas News reported. The same court, however, ruled that the prison director was immune from being sued. The U.S. Court of Appeals for the Eighth Circuit decided that Nelson’s treatment was cruel and unusual punishment, which violates the Eighth Amendment of the Constitution.

A new exhibit at a London university will celebrate 30 years of South Asian women’s involvement in British workplace struggles, Asian Image reported Oct. 8. The exhibit charts the significant role played by South Asian women in two historic industrial disputes: a strike at the Grunwick photo processing laboratory, between 1976 and 1978, and the 2005 dispute at Gate Gourmet. The exhibit runs from Oct. 8, 2009, to March 31, 2010, at The Women’s Library at London Metropolitan University.

Freshman Sen. Al Franken (D-Minn.) proposed an amendment to the 2010 Defense Appropriations bill on Oct. 6 that will further protect the privacy of employees sexually assaulted on the job, the Minnesota Independent reported. The amendment would ban federal defense contracts for companies that require employees who are sexually assaulted to have cases heard by a private arbitrator instead of a court.

Cell phone photographs of women being beaten, raped and humiliated in Guinea, West Africa, are circulating across the region, the New York Times reported Oct. 6. The photographs depict brutal sexual violence by Guinean soldiers during a political demonstration at a stadium Sept. 28. The exact number of women who were attacked is unknown. Many victims are said to be reluctant to speak or reveal their identities because of public shame or fear of retribution, and local doctors refuse to come forward.

"This time, a new stage has been reached," said Sidya Touré, a former prime minister who was beaten at the stadium and was among those who said he witnessed the brutalities. "Women as battlefield targets. We could never have imagined that."

The attacks included the killings of at least 157 people according to local human rights organizations, but the government estimates the death toll to be at 56.

Captain Moussa Dadis Camara, the leader of the military junta, has denied responsibility for the attacks, but foreign diplomats have said the violence has undermined his standing with other countries. Bernard Kouchner, the foreign minister of France, said his country could no longer work with Camara.

Approximately 42 percent of 536,000 worldwide maternal deaths occur during childbirth, the Associated Press reported Oct. 7, citing research led by Save the Children, the Gates Foundation and John Hopkins University, with investigators from 12 countries. The study was released Oct. 6 at the International Federation of Gynecology and Obstetrics World Congress in Cape Town, South Africa, and published in the October edition of the federation’s journal.

A new survey of 8,000 Kenyan women, ages 15 to 49, found that 39 percent of them–married, divorced or separated–were physically or sexually abused by their husbands or partners, Kenya’s Daily Nation reported Oct. 6. Despite modernization, Kenyan men are becoming more violent, sexually assaulting their partners in the home or elsewhere, the article reported. The research was conducted for the Kenya Demographic and Health Survey 2008-09, which hasn’t yet been released.

Lesbians are up to three times more likely than other military personnel to be discharged from the military under the "don’t ask, don’t tell policy," which bans openly gay men, lesbians and bisexual service members, the Associated Press reported Oct. 8. In 2008, female service members from every branch of the military were discharged at disproportionate rates under the policy. Under the policy, women received 56 of the 90 total Air Force discharges–61 percent of the firings.

Despite the decline in maternal mortality in India, tens of thousands of women continue to die annually during pregnancy or because of childbirth-related complications, New York-based Human Rights Watch said in a new report, reported the Associated Press on Oct. 7. Aruna Kashyap, a lead researcher, said 75 percent of those deaths are preventable. One out of every 70 Indian women who reach reproductive age will die from pregnancy, childbirth or unsafe abortions.

Revised 2007 HIV figures for pregnant women were released this week by South Africa’s Department of Health in response to heavy criticism from academics, South Africa’s Business Day reported Oct.6. The department initially published the figures in a September 2008 report, while under the supervision of the country’s controversial health minister, Manto Tshabalala-Msimang. The report stated that South Africa’s HIV prevalence figure among pregnant women, ages 15 to 49, was 28 percent, a drop from the 2006 figure of 29.1 percent. It was rejected by two high-profile South African demographers and academics recognized inconsistencies between district and provincial HIV figures.

A new Oklahoma law will require doctors to reveal detailed information on women’s abortions, which will then be posted on state’s Department of Health public Web site, the Huffington Post reported Oct. 8. The law will take effect on Nov. 1 and supporters claim that women’s privacy will protected because their names and addresses will not be published. A lawsuit by the Center for Reproductive Rights, based in New York, was filed Sept. 29 in Oklahoma City to challenge the controversial provision.

Demonstrators are planning rallies outside movie theaters across the country and abroad on Oct. 10 to counteract media and Hollywood support of film director Roman Polanski, according to the Chicago-based PAVE’s (Promoting Awareness, Victim Empowerment) Web site. The demonstrations are part of the global campaign, "Rape IS Rape." This event is being organized by PAVE, a national, grassroots nonprofit organization. Volunteers will collect signatures at theaters for a petition that supports survivors of sexual violence.

Married women between ages 18 and 34 are more likely to know their spouse’s finances before marriage and are more likely to manage the couple’s finances, FindLaw.com, a legal information Web site, reported Oct. 7. The findings, based on a national telephone survey of 1,000 American adults, found 37 percent of younger married women handle all household finances, compared to 30 percent of young married men.

Anti-choice activists must stay at least eight feet away from patients outside medical facilities in Chicago or face a fine of up to $500 fine, the Chicago Tribune reported Oct. 8. The measure was in response to complaints from a local Planned Parenthood and approved Oct. 7 by the City Council. "To me, this is all about safety," Alderman Vi Daley, the measure’s sponsor, told the Chicago Tribune. "Patients are being harassed." 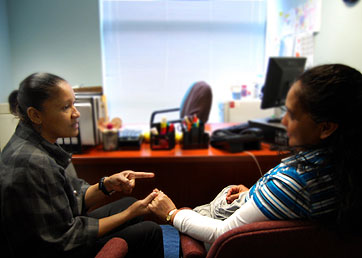