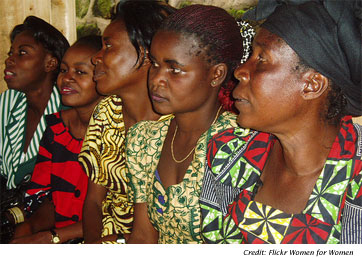 Three female radio reporters in Bukavu, in the eastern Democratic Republic of Congo, have received death threats via a cell phone text message. That’s spreading a chill in a city where three male journalists have been killed since 2007.

(WOMENSENEWS)–Radio journalist Delphie Namuto was reporting at a military base outside Bukavu, the capital of South Kivu in the eastern part of the Democratic Republic of Congo, two weeks ago when she received a chilling text message on her cell phone.

"You have a bad habit of interfering in what does not concern you to show that you are untouchable," the message said in Swahili. "Now, some of you will die so that you shut up. We’ve just been authorized to start with Kadi, then Kamuntu, then Namuto: a bullet to the head."

The text message was referring to Namuto and two other journalists: Kadi Adzuba and Jolly Kamuntu.

Namuto works for U.N.-sponsored Radio Okapi, which has a base in Kinshasa and a station in Bukavu. The station broadcasts daily news and features in the country’s four national languages and operates in partnership with the Swiss Foundation Hirondelle, a media organization that specializes in conflict zones.

Listeners with complaints usually call the radio station and have made threats against journalists in the heat of the moment. But this was the first death threat Namuto had ever received and it came straight to her cell phone.

‘Anyone Could Be Angry’

At the time of the text message, Namuto had joined a foreign delegation visiting the military base, which gave her the opportunity to interview and profile the wives of military officers.

"I report on absolutely everything, anyone could be angry," the married mother of two told Women’s eNews. "If I say an officer raped a woman, the military is cross. If I say a cop raped a girl, the police feel unhappy. They think broadcasts lead to arrests."

When covering sexual violence, Namuto said she never names rape victims or offenders. She provides only general identifiers such as location and profession. Her threatening text message did not correspond to a specific news item, according to Foundation Hirondelle. The three reporters mentioned, however, regularly cover gender issues.

One hour later, Namuto returned to the office of Radio Okapi, where she has worked since 2003.

She showed the text message to her colleague Adzuba, the first name on the list, a general assignment reporter who has also covered disarmament issues for Search for Common Ground, a conflict-resolution organization with headquarters in Washington, D.C., and Brussels, Belgium.

The two reporters attempted to dial the number linked to the text message but no one answered.

"People buy SIM cards to make one call and then throw them out," Namuto said. "This will be hard to track."

SIM stands for subscriber identity module and cell phone users usually think of them as a way to store phone numbers in a chip that can be easily transferred between phones. But a SIM card can also help legal authorities track down a mobile telephone user.

The two journalists then visited Kamuntu, a reporter working at the community radio station Mandeleo, to alert her of the threat. Radio Mandeleo has been operating in Bukavu since the late nineties; it is not affiliated with Radio Okapi.

All three women decided to file complaints with the local police, hoping authorities would work with the local cell phone networks to track down the caller.

"Up to now, people who received threats did not speak up," said Namuto. "We decided to take the risk and denounce this so the world knows the situation."

Since 2007 three radio journalists have been murdered in Bukavu under unclear circumstances.

Among those murdered were two Radio Okapi reporters, Serge Maheshe and Didace Namujimbo. The most recent murder occurred last month–Bruno Koko Chirambiza, a reporter for the private station Radio Star, was stabbed to death on Aug. 22.

Amid the general fear of violence, traffic stops at sundown in Bukavu. Doors are locked.

On Sept. 15, the Committee to Protect Journalists, based in New York City, appealed to Secretary of State Hillary Clinton, who recently visited the region, to impress on the Congolese authorities the importance of safeguarding journalists reporting on the war and its impact on vulnerable pockets of the population, particularly women.

The letter brought to her attention the organization’s deep concerns over the safety of the three reporters covering women’s issues in Bukavu.

"These women have been on the frontline covering all aspects of the war and humanitarian crisis in eastern Congo," Mohamed Keita, Africa researcher for the Committee to Protect Journalists, based in New York City, told Women’s eNews. The reporters’ coverage extends to the disarmament of combatants, plight of civilians and sexual violence against women.

The Committee to Protect Journalists considers Bukavu one of the most dangerous cities for reporting in Africa. Situated in mineral-rich east Congo, Bukavu has been the site of armed conflict and mass rape since the end of the genocide in neighboring Rwanda in 1994.

As a security measure, the journalists have adjusted and shortened their work hours.

Radio Okapi is transferring its two reporters to Kinshasa on Sept. 22, until investigations yield results in Bukavu.

Adzuba, one of the threatened reporters, told Women’s eNews that she has received five masked phone calls since Sept. 6. Some were silent. Some played back the audio of her broadcasts.

"They say they are watching me," she told Women’s eNews. "I am very traumatized. We cover everything, war, displacement, rape. Everything we do pushes buttons."

Adzuba is considering a career change.

Last month, a military man molested her at a police checkpoint. She said a policeman had asked her to transport a patient to the hospital when the army officer came to her window and put a gun to her temple to lay hands on her. She said a passerby inadvertently came to her rescue.

Kamuntu, 35, also filed a complaint at the military court on Sept. 14.

"They still haven’t discovered a single suspect, a single sign," Kamuntu told Women’s eNews in an interview Sept. 20. "But it seems we are watched."

In addition to her work at Radio Mandeleo, Kamuntu heads South Kivu’s Women Media Association, or AFEM, a professional network that offers training to female journalists and does programming focused on women’s issues. She received an award for her coverage of sexual violence in 2008. Now, she produces a weekly program on justice, distributed to 35 stations in east Congo.

"The actors of sexual violence are always the same," she said. "Rwandan Hutu refugees, undisciplined elements of the Congolese army, copycat civilians."

Kamuntu, who is 8-months pregnant, lives in an unguarded house, as she says that neither the police nor army are in the habit of providing protection to individuals.

She says that being under threat not only hurts her work but also puts fear into the hearts of the women working with her at AFEM.

All three of the journalists killed to date in Bukavu have been men.

"We are afraid the list will grow," Chouchou Namegabe, coordinator at AFEM, told Women’s eNews. "At the funeral of the last journalist killed, someone in the crowd yelled: ‘It’s now the women’s turn’." 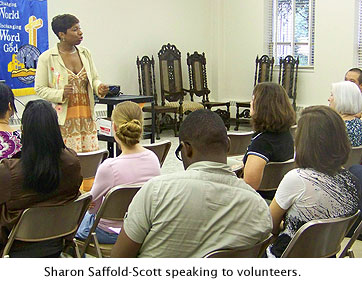 Georgia Reaches Out to Girls Lost in ‘the Life’