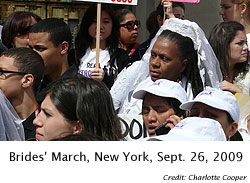 ‘Brides’ March’ Marries Itself to Quest for Safety

The Brides’ March in northern Manhattan is in its ninth year of commemorating the slaying of Gladys Ricart on her wedding day. Rita Henley Jensen says she joined the event to express sadness about two recent headline murders in her neighborhood.

(WOMENSENEWS)–The Brides’ March in northern Manhattan on Sept. 26 had special urgency this year, its ninth year.

The annual display by Latinas against the tolerance of domestic violence in their communities took place at the end of a summer where two femicides of neighborhood women garnered both community and local media attention: a mother of three who made her living cleaning offices on Wall Street and a teen mom who had prosecuted for assault the man who would become her murderer.

As a longtime resident of the community and a survivor of domestic violence, over the years I have joined the march along its 6.7 mile route whenever my work schedule permits.

I love the spunk of this event. I love the visual flare of women in white bridal gowns marching down streets together shouting, "No more violence," (instead of solitarily whispering "I do").

This year, the brutal murders of two women who lived blocks away from me added to my sense of the march’s significance. And they were only the two victims I knew about.

The New York City Domestic Violence Commissioner Yolanda B. Jimenez said in an interview this week that my neighborhood experienced six domestic violence murders between Sept. 26, 2007, and Sept. 26, 2008. In 2009, she said, seven women in the neighborhood were murdered by spouses or boyfriends.

This year’s march drew a crowd of about 100 people, including many men who helped distribute postcards to bystanders on the street that called for the end of violence in their communities, complete with a hotline number.

‘Men Who Matter Do Not Batter’

A large group of female teens, looking dazzling in white wedding gowns, walked arm-in-arm down the main thoroughfares, shouting, "One, two, three, four, we won’t take it anymore," and "Men who matter do not batter."

To View a video of the march click here

Young men carried signs deploring violence, some shouting slogans and others content just to be there.

One male teen said his mother told him about being abused. "I really don’t know all the facts about it," he told me, "but women should not be getting abused, no matter what. Men should be doing this, spreading the word."

Manhattan City Councilman Robert Jackson walked for miles with the marchers after acknowledging the level of violence facing women in the community in his opening remarks.

Jackson said that 65 to 70 percent of all domestic violence murders in Manhattan occur above 110th street, the invisible border between the affluent, and most often white, Manhattanites and the communities of color.

Nationally, the homicide rate for "black girlfriends," a category in the Justice Department statistics, was 3.6 per 100,000 and "white girlfriends" was 1.9 per 100,000, with both experiencing an uptick in 2005, the most recent year for which the department’s statistics are available.

The march commemorates the murder of Gladys Ricart 10 years ago as she stood in her wedding gown, surrounded by her family. Her assailant, a man she had dated, was a community leader, a wealthy owner of a local taxi service. His defense–that his emotions were so powerful that he had "diminished capacity" at the moment of the shooting–enraged the community’s anti-domestic violence leadership.

Josie Ashton, a victim’s advocate in Miami’s district attorney’s office, responded by walking on the anniversary of the murder from Ricart’s New Jersey hometown to Miami, dressed in a wedding gown. Ashton was named a Women’s eNews 21 Leader in 2007.

The most recent slaying that set the community on edge was the brutal murder of a teen-mom who was living with her mother and son. In early June, the dead body of Glendalis Pagan, 19, was found stuffed in a closet of a vacant apartment near the one occupied by Andre Velez, the father of her 3-year-old. Velez had served time after he attacked a pregnant Pagan three years ago, smashing her head with a hammer after climbing into her apartment from the fire escape, according to her family and police reports. He was released on parole in March after spending a year and three months in prison.

Velez was arrested and charged with second-degree murder.

In a second slaying, Eridania Rodriguez, a 46-year-old married mother of three, was found stuffed in an air duct in a Wall Street building where she worked as a member of the cleaning staff. An elevator operator, Joseph Pabon, 25, was charged with her murder. Rodriguez lived within five blocks of Pagan.

Commissioner Jimenez said that citywide, the rate of domestic violence homicides has dropped by 31 percent in the last year, with a large drop of 42 percent in the Bronx. She believes the drop is the result of actions of community organizations such as the Brides’ March in "getting the word out." 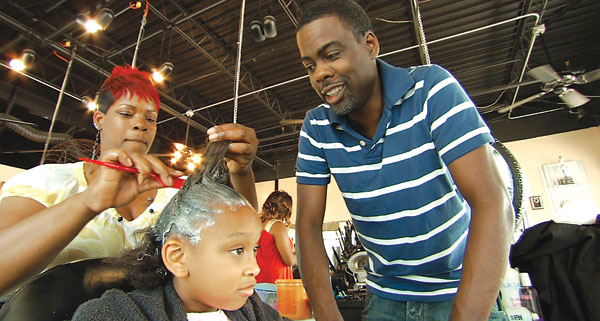 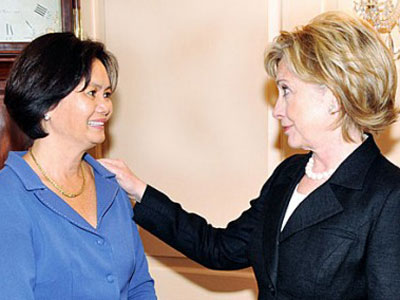