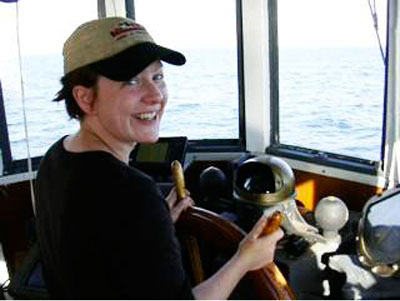 In the aftermath of September 11, 2001, the retired fireboat John J. Harvey was called back into service to fight blazes and aid survivors. Jessica DuLong, the boat’s engineer and a freelance journalist, recounts this time in “My River Chronicles.”

NEW YORK (WOMENSENEWS)–On the morning of the 12th, I call Huntley’s cell phone and Tim answers.

"Where do you think we are?" he says. My head begins to spin. I had spent all day Tuesday in Brooklyn, wandering around the way so many New Yorkers had, trying unsuccessfully to donate blood, asking police officers if there was any way to help.

"They don’t even know what to do with us," one officer replied. It hadn’t even occurred to me that the boat would be down there.

I want to help, but I have no idea how to get to the fireboat, since subway service is shut down and the bridges and tunnels are all still closed. Tim passes the phone to Bob, who has just arrived, having caught a boat at FDNY Marine Division headquarters in the Brooklyn Navy Yard. He tells me that’s my best bet.

Will my John J. Harvey crew shirt–with its line drawing of the boat on the front and "Crew (Really)" printed on the back–be proof enough that I’m actually an engineer? It is.

A FDNY lieutenant escorts me to a boat where three men in fatigues, merchant marines, are eating lunch. When the lieutenant gives them their assignment, they throw down their sandwiches, all charged up, ready to take me over.

They don their life vests, toss me a spare and direct me to the "best seat in the house" in front of the steering station of a small open-decked pontoon boat that looks something like a golf cart on water.

When I see that the crew remains standing, I stand too. As the boat picks up speed, I steady myself first with one hand, then two, against the slap of the bow on the water. The life jacket zipped up the middle of my chest was last worn by someone much bigger. It flaps in the wind, an apt metaphor for how I feel cruising into this situation: ill-equipped.

A pillow of white smoke rises above Lower Manhattan from between the remaining buildings, ascending quietly, gently, in that clear blue sky. At about 11 o’clock on Wednesday morning, more than 24 hours after both towers have collapsed, ground zero is still ablaze.

No one knows yet that firefighters will work for months to extinguish the last fires, or that ironworkers cutting away at the pile will pull up sections of steel beam, only to watch the nearly molten ends flare up when exposed to a fresh burst of air.

As we swing around the tip of Manhattan, the caustic smell grows stronger and more bitter, the distinctive acrid mix of ash, heat, concrete, steel and death.

Just south of North Cove, I spot the unpolished bronze nozzles of the John J. Harvey’s deck guns and a wave of love consumes me.

One deck gun at the stern sends water back into the river, showing me that the pumps are operating and that the boat is actively feeding Hudson River water to the hoses on land.

For the first time I see the boat pumping water with a purpose, doing the important work for which she was built.

Note: Women’s eNews is not responsible for the content of external Internet sites and the contents of sitethe link points to may change.