The latest data from Japan’s national police find a 20 percent jump in the number of women reporting domestic violence. But advocates say there is a long way to go in a country that only criminalized family violence in 2001.

TOKYO (WOMENSENEWS)–Japanese women are showing signs of breaking the taboo against reporting cases of domestic violence to the police.

A key indicator of that: a healthy jump in the number of women speaking out to protect themselves and their children.

Reports of domestic abuse handled by police increased by more than 20 percent last year to a record 25,200 cases, the fifth straight annual rise, according to data from the National Police Agency in March 2009. More than 98 percent of the victims were women.

“Social norms are changing and what used to be an unfortunate private family matter is now seen as unacceptable and requiring state intervention,” said Jeffrey Kingston, director of Asian studies at Temple University in Tokyo.

After a couple of extreme cases drew widespread publicity in the 1990s, lawmakers here made history by criminalizing domestic violence in 2001 with the Act on the Prevention of Spousal Violence Law.

The law created a system for preventing and dealing with the consequences of domestic violence and made provisions for courts to impose restraining orders. Failure to comply with court orders, under the law, is punishable by up to one year in prison and fines up to about $10,000.

Beginning in 2002, the government also began to provide funding for shelters for abuse survivors in every prefecture in Japan. Currently, there are about 117 shelters hidden in back streets with no signs. They offer counseling services, temporarily protect victims and provide information.

“The media, government and medical and legal professionals are also working to stem this hidden scourge,” Kingston said. “But it’s still a long road ahead.”

Kingston said that numerous analysts here agree that, despite the rise in reporting of abuse, many victims remain silent about their suffering and are reluctant to involve the authorities.

Kingston said Japan’s legal apparatus lags far behind that of the United States, where there is established precedent for battered wife syndrome as a mitigating factor in spouse murders.

Women and Children at Risk

Women and children in Japan remain at unacceptably high risk of domestic abuse, especially now as the economic misery index soars. A Cabinet Office survey, which was conducted in October-November of last year, found that 33.2 percent of married women have experienced physical and mental abuse from their husbands–these numbers were unchanged from the previous survey in 2005.

Only around 3 percent of these women consulted with police or a hospital and about 1 percent turned to prefecture help centers, lawyers or private-sector shelters. Of the women who experienced domestic violence from their husbands, 34.4 percent said they were injured or developed mental disorders.

Volunteer women’s groups and lawyers are doing what they can to educate the public about domestic violence, said Keiko Otsu, a committee member of the Tokyo Women’s Shelter. “We want victims to call us so we can tell them how to escape, to come to our shelters and let them know that they are not alone,” she said.

Otsu said that Japanese courts are routinely harder on women than men, and that judges often sympathize with husbands’ behaviors. In her view, women who bring charges of domestic violence often suffer degrading treatment from the police, lawyers, mediators and judges involved in their cases.

Sachiko Utsumi, 33, spent the last several months in a women’s shelter in Osaka. She said she is grateful for the help.

“My husband beat me for three years for any reason,” she said. “I finally couldn’t take it anymore.”

Catherine Makino, based in Tokyo, is a correspondent for Inter Press Service. She has worked for numerous publications and broadcasters, including The San Francisco Chronicle, Voice of America Radio, Japan Times and Asian Wall Street Journal.

One response to “In Japan, More Women Report Domestic Crimes” 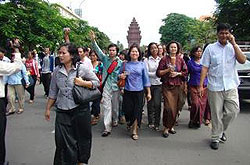