Wise Women Unite! What Sotomayor Should Have Said

Hats off to the team that vetted Sotomayor’s nomination and helped make the hearings a relatively dull affair so far. But C. Nicole Mason wishes the nominee had been able–politically speaking–to explain why a wise Latina woman is needed on the bench.

(WOMENSENEWS)–I suppose it’s a good thing Judge Sonya Sotomayor’s confirmation hearings have been a little boring and uneventful. I keep waiting for the scandalous hidden love affair to emerge, but nothing. No affair, unpaid taxes or skeletons to derail her confirmation.

Hats off to the team that vetted her nomination.

What has become a sticking point, though, are Sotomayor’s comments in the past when she had the nerve to refer to herself as wise.

If that weren’t enough cause for alarm, she went on in the same 2001 speech at the School of Law at University of California Berkeley to imply that she might reach a better decision than a white man in a similar position or faced with similar judicial questions.

How dare she? Everyone knows white men set the bar when it comes to making fair and impartial decisions. They never allow their background or experience to influence their judgment.

Unless, of course, you count the decision handed down by the Supreme Court just two years ago where it ruled 5-4 that workers who find out years later they suffered pay discrimination "are out of luck" when it comes to filing a case against their employers.

With the exception of Justice Clarence Thomas, all of the justices who agreed to limit the claims of pay discrimination based on gender or sex were white men. They reasoned that waiting too long would impair the employer’s ability to defend against claims.

Talk about one’s experience or lack thereof influencing a decision.

It was obvious from the majority opinion that none of them had been in the position of having their work devalued because of their gender.

Justice Ruth Bader Ginsburg, the only woman on the bench, who dissented, noted that in rendering its decision the court "does not comprehend, or is indifferent to, the insidious way in which women can be victims of pay discrimination."

Rarely, did media commentators–or anyone else for that matter–question whether or not the background or experience of the five majority justices had shaped their opinion in the case.

In the instance of Sotomayor, her racial background, heritage and gender have taken center stage in the confirmation hearings.

Critical senators have spent an inordinate amount of time raising suspicion about Sotomayor’s ability to be impartial and by extension, to be an effective Justice. Given her even judicial record, it is hard to believe this is an issue.

I Wished She’d Stood Up for Herself

In answering concerns over her "troubling" wise Latina remark, I wish she had stood tall and defended her comments.

Instead she backed down and brushed off her comments as having been taken out of context and a bad joke that didn’t go over well. She also pledged her undying commitment to the law and impartiality.

Here’s the alternative script still running in my head:

"I believe I am wise and like Justice O’Connor I am aware of how my experiences not only as a woman, but a Latina have not only made it more difficult for me to pursue and reach my goals in this country, but have shaped my worldview and perspective. I am standing here before you today as a Supreme Court justice nominee because it took wisdom from a very young age to navigate a system that was not designed for my success. In these rapidly changing times, it will take wisdom, prudence and a brilliant command of the law to help decide many of the important cases that will come before me as Justice. And I am prepared."

Presumably, saying that–however true–would have been political and judicial suicide.

But let’s be real. Background, heritage and experience play in one’s perspective and decision-making.

Racial and ethnic minorities and women, however, are asked to check their identity at the door. It is assumed that once given access to power and resources, they will try to funnel those resources and power to their own kind.

Sotomayor’s nomination hearing is an important reminder of how far we still have to go to include true diversity into our structures and institutions.

C. Nicole Mason, Ph.D., is a political scientist and executive director of the Women of Color Policy Network at the Wagner Graduate School of Public Service at New York University. Her writing and views have been featured on CNN, Essence Magazine, Realclearpolitics, the Progressive, the Philadelphia Inquirer, Women’s e-news, and NPR’s Talk of the Nation. 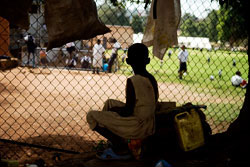