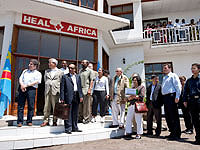 Military operations and rebel reprisals in eastern Congo — plus corporate mineral interests — have fueled a surge in sexual violence since January this year. Activists are pushing to hold rapists and companies accountable.

WASHINGTON, D.C. (WOMENSENEWS)–Worsening sexual violence in the troubled eastern region of the Democratic Republic of Congo has triggered a rising outcry among U.S. activists and rights groups this month.

Last week, the Congolese army came under scrutiny from the United Nations and human rights groups for its role in raping, killing and looting sprees during military operations in the two eastern provinces of North Kivu and South Kivu.

Human Rights Watch called on the army to hold accountable soldiers involved in the rape of 143 women and girls, more than half of the 250 rape cases the organization documented in North Kivu.

"The Congolese army is responsible for widespread and vicious abuses against its own people that amount to war crimes," Anneke Van Woudenberg, a senior researcher in the Africa division at Human Rights Watch, said in a May 19 report.

Records from HEAL Africa, a group offering legal and medical help to sexual violence victims, also implicated the Congolese army as one of the major perpetrators of violence alongside Rwanda-backed rebel forces.

On May 19, a U.N. mission to eastern Congo submitted a "black list" of five high-ranking army officials, allegedly perpetrators of sexual violence, to Congolese justice and military authorities and called for their arrest. No warrants have been issued to date and two of the accused officers continue to command troops in the East despite these charges.

Congo has the largest U.N. peacekeeping mission in the world, with an estimated 18,500 people currently on the ground. An additional 3,000 are expected to arrive in June with a strengthened mandate to protect civilians.

The U.N.’s own mission in Congo became mired in scandal in 2004 when peacekeepers were accused of sexually exploiting minors and masking rapes as sex-for-food prostitution. The mission took heat again in 2006 when it received 357 complaints of sexual abuse and exploitation by peacekeepers, prompting system-wide security sector reforms.

At U.S. Senate hearings on May 13, Assistant Secretary of State for African Affairs Esther Brimmer said that the number of allegations against peacekeepers decreased to 38 cases in 2008 from 48 cases in 2007. HEAL Africa registered three cases of sexual violence implicating the United Nations Organization Mission in the Democratic Republic of Congo, MONUC.

"The notion that a peacekeeping mission can solve the problem in DRC is the wrong starting point," Comfort Lampter, a gender adviser for the U.N.’s department of peacekeeping operations told Women’s eNews. "What we have to do is put emphasis on really trying to help the government restore the institutions and mechanisms that can ensure the rule of law."

That message was echoed by panelists at a U.S. Senate hearing on sexual violence in the Democratic Republic of Congo and Sudan earlier this month.

"Prosecution is essential," Melanne Verveer, U.S. ambassador-at-large for global women’s issues, told the Senate’s Committee of Foreign Relations on May 13.

Activists added a call for corporate and consumer accountability for those benefiting from Congo’s "conflict minerals," which have attracted foreign investment and exploitation for centuries.