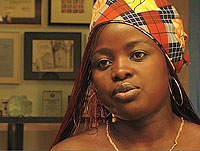 Congo has been described as the worst country to be a woman, due to sexual atrocities being committed in the eastern part of the country. At a New York media event late last month, African panelist tried to rally humanitarian attention.

(WOMENSENEWS)–Media coverage of the tsunami in 2007 triggered massive relief efforts. But when it comes to the unprecedented brutality of sexual violence in the Congo, the media is silent and the international community paralyzed.

That is the message that Chouchou Namegabe brought to media events in Washington and New York in late March. She also brought that message to meetings with U.N. and U.S. state department officials.

The looting of minerals and the death of endangered gorillas in the Congo’s eastern conflict zone grab the occasional headline, but the thousands of women raped in east Congo every month are statistics for U.N. reports–not cover stories–Namegabe and three other speakers on an all-African panel, said last month.

"Why is there no mobilization?" asked Namegabe.

Media inattention and international inaction became the two faces of humanitarian indifference that emerged at a panel discussion on sexual violence in the Democratic Republic of Congo hosted by Women’s eNews in partnership with Vital Voices and the Women’s Media Center on March 23.

In the last six years this poorly funded group has been going into the areas where women have been raped and subjected to a wide range of atrocities as part of the low-level resource war simmering between armed groups in the area.

At great personal risk, they have been holding microphones up to the women who have survived the most heinous acts and putting those accounts on the local airwaves to help rally the conscience of their local communities and contribute to the survivors’ healing process.

For this work, Women’s eNews profiled the organization in November 2008 and Vital Voices recognized Namegabe with a Fern Holland global leadership award in March 2009.

Vital Voices is a nongovernmental organization that identifies, links and trains female leaders worldwide. The Fern Holland Award was established to commemorate an American lawyer killed in Iraq in 2004.

"In African traditions, it is difficult to talk about sex in the radio," Namegabe said at the panel in New York, which followed her award ceremony in Washington. "It was a shock. A scandal. But for them, it was a first step to heal their wounds."

The minerals of east Congo have fuelled several stages of conflict in Africa’s Great Lakes region.

War, hunger and disease killed an estimated 5 million people during the Second Congo war between 1998 and 2003, when a comprehensive peace agreement and national reconciliation plan was set in motion.

Congo held the first democratic elections in four decades in 2006–giving the presidency to Joseph Kabila in Kinshasa-but the eastern part of the country has remained conflict prone.

Faida Mitifu, ambassador for the Democratic Republic of Congo to Washington D.C., another panelist, said the region is being plundered by neighboring countries and foreign companies that have the capacity to process minerals needed for the manufacture of common household appliances, computers and cell phones, creating lucrative exports.

The Enough Project, a Washington D.C.-based coalition of activists and policymakers, lobbying against genocide and crimes against humanity, launched a campaign calling on electronic companies to put an end to "conflict minerals," including tin, tungsten and tantalum on April 1.

The project seeks to replicate the "blood diamond’s campaign" which led to the "Kimberly Process," a diamond certification system to ensure that diamond trade does not fund small arms and conflict, as it did in Sierra Leone and Liberia in the nineties.

Another key to the region’s long history of conflict and sexual violence, noted Mitifu and Namegabe, is the presence of Democratic Liberation Forces of Rwanda–or FDLR–in east Congo.

These Hutu forces are remnants of neighboring Rwanda’s genocide in 1994, which killed 800,000 Tutsis and moderate Hutus. The FDLR is one in a handful of militias that have made sexual violence and plunder part of their way of life in east Congo.

The South Kivu’s Women Media Association is not standing by and watching.

Through its broadcasts and humanitarian attention to the female victims, it is helping to push the social burden of rape and its consequences back onto communities that traditionally rejected raped women and their babies.

Sex might be taboo, Namegabe told Women’s eNews, but sexual violence needs to be understood and addressed as a community problem, with victims receiving emotional support and medical attention.

Similar work has been done by another member of the New York panel, Agnes M.F. Kamara-Umunna, a Liberian radio journalist, who brought victims and perpetrators of sexual violence as a host for "Straight From the Heart," a U.N.-financed radio program, during the country’s reconciliation period. She submitted the accounts to Liberia’s Truth Reconciliation Commission, created in 2003 to investigate and report on human rights violations during Liberia’s civil wars.

The airing of these stories, said Kamara, helped the community come back together after years of conflict wounded almost everyone.

"It is a difficult thing to reconcile," she said, referring to those who commit and suffer sexual violence during the chaotic, violent times of warfare . "But they are stigmatized. Both victims and perpetrators are stigmatized."

Namegabe testified to U.N. agencies and U.S. State Department representatives during a visit to New York and D.C. She is hoping to spur more media coverage of sexual violence in East Congo and galvanize the international community to do more to protect Congolese women at high risk of sexual violence.

An average of 1,100 women are raped in east Congo each day, despite the presence of the largest United Nations peacekeeping force in the world. The Congo is the worst country in the world to be a woman, according to the United Nations Development Program.

He attributed the sparse coverage of sexual violence in east Congo to an unspoken quota system among international news outfits, which focus on Africa–the world’s second largest and most populous continent after Asia–only sporadically.

Ambassador Mitifu, the fourth panelist at the March event in New York, said she first reported the issue of sexual violence in east Congo to the U.S. administration in 1999.

"No one wanted to believe it," she said. "Ten years later I am glad the media is paying attention."