MDG 5 envisions reducing maternal deaths 75 percent by 2015. Of all the promises to the world’s distressed people, it is the least likely to meet its target. Last week, advocates in India and Ghana said more political willpower is needed fast. 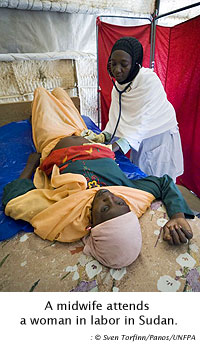 (WOMENSENEWS)–What would it take to put the Millennium Development Goal that lags furthest behind back on course?

That was the topic last week as a group of about 55 people around the world participated in an online chat about Goal No. 5, which promises to improve maternal health, to reduce the rate of maternal mortality ratio by three-quarters between 1990 and 2015 and improve universal access to reproductive health care.

The panelists had a chance to communicate directly to health advocates from the two regions where women giving birth face the highest risks: sub-Saharan Africa and Southern Asia.

Jemima A. Dennis-Antwi is a practicing midwife in Ghana and a regional midwifery adviser for Anglophone Africa for the International Confederation of Midwives, a Dutch nongovernmental organization.

Annie Raja is general secretary of the National Federation of Indian Women, which campaigns for issues such as food security.

The target set by MDG 5 is to reduce annual maternal deaths to 144,000 worldwide, a reduction of approximately 75 percent from 1990 figures. That year, 576,000 women died from pregnancy or complications due to childbirth but those deaths were only reduced to 536,000 by 2005.

Over 98 percent of maternal deaths occur in developing nations; the vast majority of those deaths–over 80 percent, according to United Nations statistics–are in sub-Saharan Africa and Southern Asia.

During the chat, Dennis-Antwi pressed for relatively inexpensive national networks of trained midwives to serve the dual role of birth attendant and health advocate for the local community.

Recent moves by the U.S. administration of Barack Obama are expected to put millions of dollars into organizations that could fund such programs.

The United States has reinstated $50 million in annual U.S. funding to the United Nations Population Fund, which operates maternal health and family planning programs in over 130 nations around the world and advocates for women’s rights.

The Obama administration has also rescinded a rule preventing U.S. aid from reaching international family planning clinics with any connection to abortion services, which held back $244 million over a seven-year period.

Dennis-Antwi applauded the U.S. policy moves, saying they would likely curb the maternal death rates, since many women die in illegal abortions, which have a fatality risk of 13 percent. About 68,000 women die each year from abortion complications, according to the U.N. Population Fund.

Those are first steps in the right direction. Dennis-Antwi emphasized the need for stronger leadership within regions with high maternal death rates to adapt U.N. development policy.

“The midwifery association within countries can adopt and translate these statements and road maps, champion the cause of mothers and children in their countries and therefore be levers in bringing pressure to bear on government,” she said. “If midwifery associations are well positioned and strengthened they will become the advocates and mouthpieces for mothers and children.”

Raja agreed, saying India must show its own commitment to MDG 5 by boosting investment in public health care, since maternal mortality is linked to a range of other preventable threats, such as anemia.

Raja said India’s promise to commit 2 percent of its gross national product by 2012 to health care is not enough. Spending should be 5 percent or 6 percent of the gross domestic product if the country seriously wants to make progress, she said.

“Only 1 percent of the GDP is used in India for the health sector, so you cannot achieve even one-quarter of the goal by 2015,” she said. “You can go on making promises to the people, giving speeches to the people, but if you want to achieve you need to invest at least 5 percent or 6 percent of your GDP. That is not happening. The need is political will and social commitment and that is not happening.”

The Millennium Development Goals set by world leaders and the United Nations in 2000 exist as a blueprint to halve extreme poverty, halt the spread of HIV/AIDS and improve education and health of all.

A vision of what would be needed in her region to reach the maternal health goal is a sub-Saharan network of well-trained, well-equipped midwives, said Dennis-Antwi, who can provide reproductive care and also advocate for the public health of the local community in which she is positioned.

She believes that midwifery associations can tailor MDG policy road maps to the specification of individual local communities and give a voice to women and children who now suffer and die in political silence.

She looks to the day when skilled midwives are a familiar face in rural communities, helping children and husbands ask their local leaders, “Why did my mother die?” and “Why did my wife die?”

Research by Action Aid, the global antipoverty agency based in South Africa, indicated that in the least developed countries 28 of every 100 laboring women are attended by a skilled birth assistant.

Overall, in the developing world less than 57 percent of births are attended by skilled assistants or midwifes, and according to the World Health Organization, 334,000 midwifes are needed to bring their numbers to the 90 percent attendance rate targeted by the goals.

Dennis-Antwi said that in Ghana it costs about $4,200 to put a midwife through a three-year training program.

She said trained midwives could, in some cases, work with traditional birth attendants who often lack clinical training, but are skilled in the cultural sensitivities and needs of the patients.

The U.N. Millennium Campaign organizes the annual “Stand Up and Take Action” events linked to Oct. 17, International Day for the Eradication of Poverty.

This year, during Oct. 16-18, it will be organizing events around the world that take a thematic focus on women and maternal health.

Charlotte Cooper is a freelance writer and co-founder of the UK feminist magazine, Subtext.