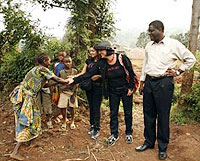 For its 11th year, V-Day is focusing on women in the eastern part of the Democratic Republic of Congo whose bodies have been torn apart by armed men’s sexual violence. Beneficiaries include Panza Hospital and UNICEF.

(WOMENSENEWS)–When Eve Ensler met Dr. Denis Mukwege, the celebrated gynecologist from the Democratic Republic of Congo, almost three years ago, it was hard to communicate.

Her French was weak, and his English was choppy.

But Ensler, the leader of a grass-roots anti-violence movement and author of the play, "The Vagina Monologues," still managed to understand the gist of Mukwege’s stories about his work at Panzi Hospital, in Bukavu, in the Southern Kivu Province, ground zero of the mass gang-rapes of thousands of women and girls.

"Dr. Mukwege puts himself on the line, risking his life, working on 10 to 12 women a day," Ensler said in an interview on Feb. 11. "For 12 years, he’s been operating on women whose vaginas and rectums have been ripped apart, who have no bladder."

Ensler spoke with Women’s eNews at the first event of V-Day’s Turning Pain to Power tour, part of its 2009 season, held at the 92nd Street Y in New York City in a room displaying photographs of women suffering from the effects of sexual violence.

Proceeds from the Feb. 11-25 tour, "Stop Raping Our Greatest Resource: Power to Women and Girls of the DRC," will benefit the Panzi Hospital as well as V-Day’s efforts to launch a leadership institute called the City of Joy, which will train Congolese women to become political leaders, and also offer them transitional housing.

Organizers hope to raise enough money to pay for the facility which can house 100 Congolese women at a time and provide them with education and political-empowerment training.

V-Day campaigns are usually timed around productions of the Vagina Monologues, staged on or around Valentine’s Day, with the V standing for victory, valentine and vagina.

Activists use the holiday to celebrate women and imagine a world free of gender violence. This year, organizers will also be screening V-Day’s documentary "Until the Violence Stops," as well as a PBS documentary about a writing group that Ensler leads at a women’s prison in Bedford Hills, N.Y., and two new artistic works.

Last April, an organizer said V-Day had raised $60 million since 1998 for more than 5,000 local anti-violence groups and safe houses in South Dakota, the Democratic Republic of Congo, Haiti, Kenya, Egypt and Iraq.

Mukwege, who will hold a public conversation with Ensler about the Congo throughout the tour, spoke in New York about the armed militias that enter villages, line up women of all ages and social status and gang-rape them, often destroying their vaginas with sticks, guns, and machetes. The victims’ male relatives often flee the community, ashamed when they see their wives and mothers raped before their eyes, or are killed by the militias.

"Ten years ago, working as an ob-gyn, I had never seen this kind of violence," said Mukwege. "The first woman who told me she had been raped and her vagina had been shot, I thought it was an act of barbarism, of a drug-addicted person. But I was wrong to think this, it turns out it was a strategy of war . . . There is a need for a regional solution."

In Panzi, 250 of the hospital’s 300 beds hold survivors. Many have saved money for years so they could travel to the hospital and receive the free surgery. When ambulances go to villages in eastern Congo, they are sometimes overwhelmed by women trying to enter the vehicle, and doctors are forced to pick who will come with them, as well as who will remain. The hospital performs over 3,600 free surgeries a year for fistula, a condition tied to sexual violence that prevents them from controlling their urine or feces. The surgeries are funded primarily by UNICEF.

Ensler amplified Mukwege’s account, recalling in the interview a visit to Panzi Hospital when she was overwhelmed by the women who lined up to tell her their stories.

Some told her about men destroying their vaginas and anuses with guns, others of watching their children murdered before their eyes. Many women told Ensler that before receiving surgery at Panzi Hospital, they could not control their urine or feces, making it difficult to work, take care of their families, or have a normal life.

The International Rescue Committee estimates that 5.4 million people have died from the ongoing Congolese conflict, primarily from preventable illnesses and malnutrition caused by a breakdown in medical infrastructure and the Congolese economy.

Although a peace agreement was reached in 2003, many armed bands still occupy and loot different parts of the eastern Congo, a region known for its tremendous mineral wealth.

In recent years, as many as 14 armed groups have operated in the eastern Congo, according to Human Rights Watch. Some are Congolese rebels. Others come from Rwanda, ostensibly pursuing revenge against remnants of the genocide-era Rwandan army inside Congo that the U.N. has said are attacking local Tutsis. But often the violence lacks political definition, appearing more like indiscriminate attacks on Congolese communities by soldiers intent on looting.

"The government does not control anything in this part of the country," said Mukwege, whose interest in becoming a doctor began when he was a child and saw his asthmatic mother benefit from medical treatment.

He said the real tragedy today is that international attention wanders away from his country, even though 5 million people have died, and hundreds of thousands of women have been raped.

"The rapes are worse than rapes, they are like murders," said Mukwege. "They put an end to life in women as they know it. The most important thing is for men to become aware of the act. They forget, but the girl who is raped is destroyed. It’s like an assassination."

Rebecca Harshbarger is a staff reporter for Women’s eNews.