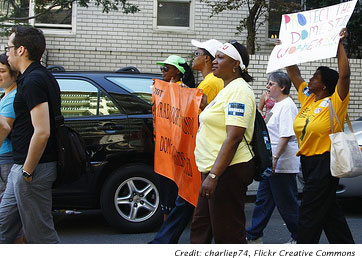 Amid massive layoffs, domestic workers and advocates across the country are looking to New York to become the first state to extend legal protections for health insurance, overtime, severance and cost-of-living salary adjustments.

(WOMENSENEWS)–When Lois Newland began working as a nanny in New York a few years ago, she was disappointed to learn how few rules there were about the type of treatment she could expect at work.

Overtime, severance pay, personal days, maternity leave and wage standards were all left up to the discretion of an employer, with few federal guidelines on what household workers could otherwise expect on the job.

"In the islands, we have protection for domestic workers, so I was very aware of my rights," said Newland, who grew up in Jamaica and has worked as a nanny in New York City, Long Island and Connecticut. Jamaican law guarantees domestic workers employer-paid maternity-leave and legal recourse against employers who fail to pay. It also extends the weekly minimum wage of $51 to household workers.

A year ago, Newland encountered other nannies in the playground distributing flyers about a campaign by Domestic Workers United, an umbrella advocacy group in New York. The group’s members include the Damayan Migrant Workers Association, which organizes Filipino domestic workers in New York and New Jersey, and Unity Housecleaners, a worker-run cooperative on Long Island. The fliers called for lobbying support for a New York state bill of rights that would extend some federal labor provisions to nannies and other caregivers who are privately employed.

In 2003 Domestic Workers United successfully lobbied the New York City Council to pass legislation protecting the rights of domestic workers who used city employment agencies. It began working to reach all domestic workers throughout the state.

For several years in a row the bill has been blocked in the state Senate Labor Committee, where members doubted it had any chance in the Republican-controlled chamber.

This year, however, Benjamin Rosen, communications director for Assemblyman Keith L.T. Wright, a grandson of domestic workers who is sponsoring the bill and working closely with Domestic Workers United, thinks things are looking better for the bill this session.

"With the new Democratic Senate majority, we are more confident that we will see it passed this year," said Rosen, whose boss represents the 70th District in Harlem. "So many people are laying off domestic workers, who are unable to get unemployment or other benefits which other laid-off workers would be entitled to. We believe they are some of the most mistreated workers in the state."

The Assembly Labor Committee passed the bill 25-1; it will proceed to the full Assembly, where it currently has 13 co-sponsors but needs 76 votes to pass, and to the Senate for consideration. Wright hopes that the bill will be voted on shortly, due to the high levels of stress domestic workers are facing from the recession.

"We met with most of the new Senate leadership, and all of them said this is something they would support," said Ai-Jen Poo, executive director of Domestic Workers United.

Ana-Liza Caballes, a coordinator for the Damayan Migrant Workers Association, says advocates in other states are watching what happens in New York. "No other state has substantial rights for domestic workers," she said. "In California, domestic workers will start a campaign next year to push for a similar bill."

Last year, some critics argued it was too sweeping and should be presented in a more piecemeal fashion. Others argued that domestic workers should seek an amendment to the federal National Labor Relations Act rather than working on the state level.

Currently, the National Labor Relations Act, also known as the Wagner Act of 1935, guarantees the rights of most workers to organize labor unions or collectively bargain but explicitly excludes domestic or agricultural workers.

The Fair Labor Standards Act of 1938, which sets a national minimum wage and guarantees overtime for many jobs, excludes caregivers for children and the elderly, and prevents live-in domestic workers from receiving overtime. Other labor acts, such as the Occupational Safety and Health Act, also exclude domestic workers.

Poo said many employers are responding to the financial crisis by laying off workers, cutting wages, extending work and sharing baby-sitters. "One baby-sitter now has to do three times, but is paid the same. Workers are getting fired and being replaced with workers who will work for half as much. It’s really a situation that has a chilling effect; people are facing exploitative situations and can’t speak up. It was a crisis before, but now it’s an epidemic."

The Damayan Migrant Workers Association estimates that white-collar households that earn above $100,000 a year and have small children employ at least one worker in their private households.

Jean Rustici, deputy director of Au Pair in America, an agency based in New York City, and mother of three who relies on a nanny for child care, encourages employers to do everything possible to keep domestic workers’ salaries stable. "Even though it would be very tempting to renegotiate your nanny’s salary lower, I would rather cut corners somewhere else than child care."

There are about 200,000 domestic workers employed in New York state, according to research compiled between 2003 and 2004 by Domestic Workers United, the Brennan Center for Justice at New York University and the New York-based Jews for Racial and Economic Justice. Twenty-six percent earn wages below the poverty line or below minimum wage. Half of all domestic employees work overtime–often working 50 and 60 hours week–but only about 30 percent earn overtime pay.

Nine out of 10 domestic workers do not receive health insurance from their employers, even though the work they do is often very physically demanding and may, in the case of housekeepers, expose them to toxic chemicals.

In New York, according to the research, 95 percent of domestic workers are estimated to be people of color and 93 percent are women. Most are immigrants.

Some domestic workers told the researchers about abuse at the hands of employers, who exploited their fears of deportation to withhold thousands of dollars in wages. Others verbally or physically abused nannies and housekeepers; some live-in workers reported being placed in basements that lacked heat during the winter.

"One of our members was verbally and physically abused," said Newland, who has traveled to Albany three times in the past year to lobby legislators. "We have photographs of her showing abuse. We work in an industry where people are being treated like slaves. We’re not shackled, but we have to work long hours, and have employees working eight, nine years then discarded, and terminated without any compensation."

Rebecca Harshbarger is a reporter at Women’s eNews, based in New York City.

Boxer Has New Forum; Needs of Girls and Women Rise