When welfare was overhauled in 1996, single mothers lost a safety net that protected them. Rep. Gwen Moore is trying to change that in Congress. Second in a series on members of Congress who are advancing issues raised by the WeNews’ Memo.

The incoming vice chair of a bipartisan group of female lawmakers in the House of Representatives, Moore’s first effort will be to reframe the debate over the stimulus package, a pending bill with a price tag around $800 billion to rebuild the nation’s infrastructure, aid economically ailing state governments and provide tax breaks to individuals, couples and businesses.

In an interview with Women’s eNews, Moore said she wants to set aside some money to help female workers. The interview followed a panel discussion in Denver last summer at the Democratic National Convention where she addressed the issue of women and poverty.

“We’re going to rebuild our roads, our bridges; certainly very worthwhile things to stimulate the economy,” she said. “At the risk of stereotyping what women do, we don’t build bridges and pave roads. There is no discussion about increasing or providing a worthy wage for women in child care in the stimulus package.”

Two years ago, some 15 million U.S. women lived in poverty, according to 2006 Census data collated by the Washington-based National Women’s Law Center. Poverty rates are especially high among women of color, older women and single mothers. Black and Hispanic women are about twice as likely to be poor as white women. Roughly 1 in 5 elderly women are poor, as are 1 in 3 single mothers.

Also high on Moore’s legislative wish list are bills that would narrow the wage gap and give federal programs that combat domestic violence more money.

And she wants to take a stab at improving the lives of women on welfare. She plans to introduce legislation that would enable women eligible for Temporary Assistance to Needy Families–the name given to welfare payments in the 1996 federal overhaul–to receive benefits while receiving up to two years of post-secondary education.

When Moore talks about the plight of women in poverty, she speaks from experience.

If you have trouble viewing this video, please use this link:
http://www.youtube.com/watch?v=r-pS-5AbNpcandfeature=channel_page

Shortly after she enrolled in Marquette University in Milwaukee, Wis., Moore became a single mother. She received government assistance and eight years later, in 1978, she graduated with a bachelor’s degree in political science. In the meantime, she stretched every penny to support herself and her family while in school.

Now in Congress, she hasn’t forgotten the challenges she faced when she was a single teen mom on welfare.

Poor women face particularly hard times during periods of economic downturn, Moore said. Nowhere is that more evident than in urban areas like her home town of Milwaukee, one of the poorer cities in the country.

Often the last hired and first fired, women have less money and face longer periods without regular income. If they do have a job they tend to make less than men, have fewer benefits or have part-time positions. Topping it off, many of the jobs typically held by women are not covered by unemployment insurance.

Women are also more likely to leave the work force to shoulder caregiving responsibilities for family members, and earn less than men in similar jobs. Women also save less money and have smaller pensions or retirement accounts.

And even though they have slightly better credit scores than men, women have a disproportionate share of the high-priced “subprime” loans, putting them at higher risk of foreclosure, according to a 2006 report by Allen Fishbein, a scholar at the Consumer Federation of America, a think tank and lobby in Washington, D.C.

Financial problems are even more acute for single women and women of color.

“When you compound those problems, you see that women are just destined to be poor,” Moore said.

And yet, the government shredded the safety net for poor women when it overhauled the welfare system in 1996, she notes.

That year, President Bill Clinton teamed up with a Republican Congress to enact the Personal Responsibility and Work Opportunity Reconciliation Act, a law that tied welfare payments to behavior–including requiring recipients to engage in work-related activities–rather than need. The law was reauthorized in 2004.

“When we ended welfare as we knew it, we basically ended unemployment compensation for women,” Moore said.

Since she first won office in 2004, Moore has attempted to undo some of the changes made to welfare before she arrived.

In her first year in Congress, Moore pushed into law a bill that protects the identity of victims of domestic violence in housing shelters. Called the Shield Act, the law exempts shelters from having to provide a victim’s personal information to the government.

“This new law will ensure that (Housing and Urban Development) rules don’t allow the identities and location of victims in domestic violence shelters to be exposed to those who want to assault or kill them,” Moore said at the time the law was passed.

In some ways, the future looks bright for Moore’s anti-poverty agenda.

Democrats now control the House, the Senate and the White House for the first time since 1994. And the economic downturn has convinced even fiscal conservatives to support more government spending.

But Moore acknowledges that fighting for dollars for federal programs could be tougher than ever as federal budget deficits grow. 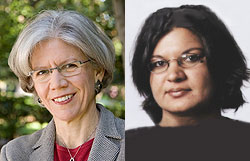 Workers on Edge Need the Most Stimulus Aid