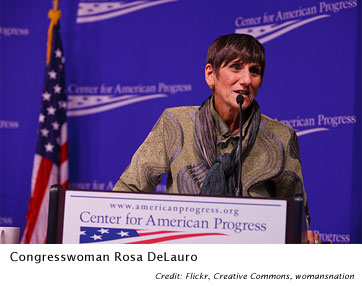 Rep. Rosa DeLauro, a strong fair-pay advocate, says 2009 will bring advancements for women’s wages. First part of a series on members of Congress who are advancing issues raised in the WeNews’ Memo series.

WASHINGTON (WOMENSENEWS)–Rep. Rosa DeLauro, the Connecticut Democrat, says now is the time to put the squeeze on the wage gap.

The House passed on Friday two bills to bolster women’s economic security: one is designed to reverse a 2007 Supreme Court decision that made it more difficult for women to sue for wage bias and the other strengthens existing pay equity laws.

The Senate could consider the bills as early as this week, ready to be placed on President Barack Obama’s desk for signature immediately after he takes office.

“I’m very, very optimistic that with a new administration, in a new environment, with President-elect Obama using and talking about this as a major portion of his campaign, that . . . it can be one of the first pieces of new legislation that this president signs,” DeLauro said in a recent interview.

More than four decades after Congress passed a law making it illegal for employers to pay women less than men who do the same job, women still earn less.

In 2007 women made 78 cents for every dollar a man earned, according to the Institute for Women’s Policy Research, a think tank in Washington, D.C. The overall wage gap among all workers is significantly more when low-paying, female-dominant job sectors are factored in, according to the institute.

Different occupations, education levels, job tenure, work hours and other factors associated with pay don’t explain away pay differences, according to a 2005 study by the American Association of University Women, an advocacy group in Washington, D.C.

A staunch advocate for women’s rights, DeLauro spoke about the subject on a panel discussion sponsored by Women’s eNews at the Democratic National Convention in Denver last August and at a session sponsored by Lifetime Television Networks.

She revisited the issue in a recent interview with Women’s eNews.

Tougher pay equity laws, DeLauro said, are needed now more than ever because women bear the brunt of economic downturns.

Not only do women earn less than men, they are also more likely than men to make minimum wage, according to the National Center for Research on Women in New York.

“What undergirds all that is the fact that women make less,” DeLauro said.

DeLauro hopes that will begin to change with passage of the Lilly Ledbetter Fair Pay Act, which gives victims of wage bias more time to file suit for discrimination.

Under current law–as it was recently interpreted by the Supreme Court–a victim must file a complaint with the government within 180 days of the discriminatory event. But many women don’t learn of the bias until long after that time limit has expired.

That was the case with Lilly Ledbetter, a former employee at a Goodyear Tire and Rubber Company plant in Alabama who at 60 found out her employer had for years been paying her substantially less than her male counterparts for the same work. (Women’s eNews named Ledbetter a 2009 Leader for the 21st Century because of her work campaigning for fair pay.)

Ledbetter sued and won, but ultimately lost her case in a 5-4 ruling by the Supreme Court in 2007. In a dissent from the bench, Justice Ruth Bader Ginsburg urged Congress to pass legislation to reverse the decision.

Lawmakers responded with a bill that would restore the so-called paycheck-accrual rule, which starts the 180-day clock after each discriminatory paycheck is issued rather than after the initial discriminatory salary decision was made.

Last year the bill passed the House but fell to a filibuster threat from Republicans in the Senate, who were emboldened by a veto threat from President Bush.

Obama, however, made the bill a talking point in his campaign for the White House, and put Ledbetter in the national spotlight as a surrogate speaker on the campaign trail and at the Democratic National Convention.

DeLauro hopes Congress will also move the Paycheck Fairness Act, which would lower legal standards that protect employers from complaints of discrimination. It would also lift caps for damages in wage bias suits and make it easier for employees to bring class action suits and share salary information.

DeLauro’s bill has made it out of the House before but has never seen a vote in the Senate.

Prospects are rosier for both bills this time around. Obama is a vocal supporter of tougher pay equity laws and Democrats padded their ranks on Election Day and now have at least 57 Senate seats, just three votes shy of a filibuster-proof majority. In addition, Republican women in the Senate have been known to join the Democrats on some women’s rights legislation.

Some women’s rights advocates are also pushing the Fair Pay Act, a third bill sponsored by Sen. Tom Harkin, D-Iowa. It would ensure employers pay men and women equally if they work in jobs requiring similar skill levels, effort, responsibility and working conditions. The bill, its supporters assert, would make salaries in jobs held predominantly by women, such as nursing, approach salaries in fields dominated by men, such as truck driving.

But DeLauro doubts the time is ripe for that legislation. “I don’t think that one is far enough along at this moment to do something about it,” she said.

One response to “DeLauro: It’s Time to Close the Wage Gap”