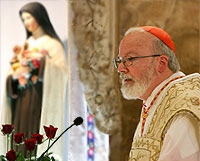 Catholic reformers hope to restore passages praising Mary and other biblical women to the lectionary used in Sunday Mass. A Vatican synod in October called for a review, providing them hope that women may gain a bigger role in church teachings.

(WOMENSENEWS)–The men and women gathered in a New York Roman Catholic church to hear the biblical song of praise that is never proclaimed on Sunday.

The 60 or so Catholics had come on a Wednesday evening in early December to listen to and meditate on the Magnificat, a canticle sung by Mary, believed by Christians to be the mother of God. In it, Mary praises God for choosing her to do his will. "My soul proclaims the greatness of the Lord," she says in St. Luke’s Gospel. "My spirit rejoices in God my savior."

The Magnificat, like many other biblical passages which spotlight women, is never read by a Catholic priest from the pulpit on Sunday. The lectionary, a selection of biblical texts carefully chosen for public proclamation during Mass, relegates the Magnificat to weekday Mass, which far fewer Catholics attend. Other passages about women have been omitted completely.

"Women’s books, women’s experiences and women’s accomplishments have been largely overlooked in the assigned scripture readings that are being proclaimed in our churches on Sundays and weekdays," wrote Sister Ruth Fox in a landmark analysis of the Bible and lectionary published in 1996.

The Roman Catholic Church does use the Magnificat as the responsorial psalm on the third Sunday of Advent, the liturgical season that precedes Christmas. But the psalm, a call-and-response between reader and congregation, disembodies the song; there’s no way to tell the words belong to Mary, or indeed, to any woman.

Prayers for Mary at Midweek

That’s why Rita Houlihan, a Catholic parishioner in New York and a board member of the Cleveland-based reform group FutureChurch, organized the mid-week prayer service centered on the Magnificat. The service highlighted aspects of Mary’s significance and character that the Catholic Church doesn’t always emphasize.

Though biblical scholarship has illuminated Mary’s place in Israel’s prophetic tradition, as well as her personal courage, it takes time for academic insights to filter out to the parishes where ordinary Catholics worship.

For example, in most English versions of the Bible, Mary calls herself God’s "handmaiden," but the Greek word actually translates as "servant" or "slave." Old Testament prophets frequently referred to themselves as "slaves of God," and by using this term for Mary, the Gospel of St. Luke places her within the prophetic tradition, a link between the old and new testaments.

Catholics at the prayer service also reflected on the courage it took for Mary to submit to God’s will. As the mother-to-be of Jesus, she didn’t know God would provide a husband along with her pregnancy, and in ancient Israel, unmarried mothers faced serious punishment. Her faith is a model for others, Houlihan said.

"If we have this fantasy that she was floated down on a cloud in a beautiful blue gown with downcast eyes . . . we’re missing out on someone who can be a leader, an example for us," Houlihan said.

The lectionary downgrades more than the Magnificat. Mary Magdalene is sometimes referred to as "Apostle to the Apostles" because all the gospels mention she was the first disciple to see Jesus after his resurrection from the dead. But this story is never read aloud on a Sunday; instead, each year congregations hear about Jesus’ later appearances to male apostles.

Another example from the Old Testament book of Exodus concerns Hebrew midwives Shiphrah and Puah, who disobeyed the Egyptian pharaoh’s command to kill male babies. The weekday reading entirely leapfrogs the verses that mention them, picking up the narrative directly afterward.

Sister Fox’s 1996 analysis also found that negative references to women and references that conform to gender stereotypes remained in the lectionary while positive references were removed. She cited the editing of Proverbs 31, which omits praise for a woman’s business acumen, dignity and wisdom but preserves passages that praise her for serving her husband.

Excluding these stories means modern congregations don’t hear about women whose faith they could attempt to emulate, said Sister Barbara Reid, a biblical scholar at Catholic Theological Union in Chicago.

"We get a skewed version of our history and a skewed imagination of who we are and what we can be," she said.

FutureChurch has been campaigning since 2006 to restore women to the lectionary. It’s not like women weren’t present, said Sister Christine Schenk, the group’s executive director. Jesus called women to be his disciples as well as men. It’s just that most history was written by men.

The lectionary, too, is a product of men, assembled in the 1970s. In the early 1990s, there was an effort to update it, but it was scotched after disagreement over translation.

The lectionary came up again in October at a church synod in Rome held to discuss the role of scripture and preaching in Catholic life. A record 24 women attended the synod, out of more than 300 participants. FutureChurch played an instrumental role in securing their attendance; supporters mailed about 20,000 postcards to bishops and Pope Benedict XVI asking them to include more women.

Catholic synods bring together bishops from around the world to discuss a particular issue in church life. The majority of a synod’s voting members are bishops; a few are clerics appointed by the pope. A third group comprises observers who attend sessions and participate in discussions but don’t vote, and biblical and doctrinal scholars who advise the clerics in their deliberations and help summarize their conclusions. Six of the 24 women were invited as scholars, the rest were observers.

Sister Schenk said contacts told her that synod participants discussed the issue of women and the lectionary during small group meetings. At the synod’s close members published a statement recommending "that an examination of the Roman lectionary be opened to see if the actual selection and ordering of the readings are truly adequate to the mission of the Church in this historic moment."

Sister Schenk said it’s possible that the careful language about examining the lectionary in light of "this historic moment" might mean examining it "in light of the fact there’s something called a women’s movement."

The synod’s final document could take a year to complete. There’s no guarantee it will recommend the pope restore women to the lectionary, or that the pope would follow such a recommendation. But for the idea even to have gotten this far is good news for Catholics who want reforms.

"I really never thought this proposal would get to first base," Sister Schenk said. "Whether it’s going to get to second base I don’t know."

Fair Pay Springs Back Onto Agenda of NY Lobbyists