Women at Center of Consumer Eco-Push

Women buy most home products and predominate as activists in schools and churches. That makes them central to a new consumer-style push for eco-friendly products and policies.

(WOMENSENEWS)–In San Francisco, construction workers on city projects are only allowed to use building materials that are toxin-free.

In New York, school janitors must buy biodegradable cleaning products instead of pollutants such as chlorine bleach.

In New Jersey, churches are installing energy-efficient switches that make the lights go off when there is no movement in the room.

Activists at a conference earlier this month in Baltimore described such initiatives as these as the new consumer-level frontier for environmentalism. Just as citizens fasten seat belts and strap on bike helmets, they are working to stop pollution before it starts by changing their shopping habits and pursuing environmentalist policies in school systems, religious organizations, and city and state governments.

It’s a development that has special appeal and application to women, says Lois Gibbs, executive director of the Center for Health, Environment and Justice, the Falls Church, Va., nonprofit that convened the First National Conference on Precaution.

"Women are the primary purchasers of cleaning and home products and the ones most involved in schools and faith-based initiatives," Gibbs says. "If we can teach women to exercise precaution and make better choices, it will make a dramatic difference for our environment."

Many of the 100,000 synthetic chemicals that have been released into the air, soil and water during the past century have been linked to health problems such as breast cancer and infertility in women and to autism and learning disabilities in children.

Women are more affected by toxins than men and women’s health problems stemming from environmental causes cost $12.2 billion per year, according to the San-Francisco based Women’s Foundation of California.

‘Safe Rather Than Sorry’

"The precautionary principle we’re applying to environmentalism means looking before you leap and being safe rather than sorry," says Pauli Ojea, a spokesperson for the San Francisco-based advocacy group Breast Cancer Action, referring to the emphasis that the 300 conference attendees in Baltimore placed on preventing pollution-related health problems.

Environmental consumerism can take many forms: sealing up holes to deter insects instead of using toxic pesticides; going to dry cleaners who use safer chemicals than the ones in conventional dry cleaning; buying a canvas shower curtain instead of a plastic one containing PVC (polyvinyl chloride, whose production releases dioxin, a carcinogen); and purchasing shampoo bottles made with PET (polyethylene terephthalate, a greener alternative to PVC). Measures like these are promoted by women’s health groups including Breast Cancer Action, the Washington-based National Women’s Health Network, the Boston-based Our Bodies, Ourselves and the New York-based Mothers and Others for a Livable Planet.

Environmentalists say reducing toxins in this way can protect the ecosystem, safeguard human health and curb medical and cleanup expenses.

Suzanne Mattei, a spokesperson for the San Francisco-based Sierra Club, says the medical problems associated with the cleanup of the Sept. 11, 2001 terrorist attacks on New York City’s World Trade Center show how costly it can be not to take adequate environmental precautions.

"Thousands of rescue workers are sick because we failed to protect them from exposure to pollution resulting from the incineration of the twin towers," says Mattei. "They have gastrointestinal problems, recurrent headaches and adult-onset asthma. This could have been prevented if we had issued safety warnings and distributed better protective gear."

By the beginning of this month 8,000 of Ground Zero’s estimated 40,000 rescue workers had joined a federal lawsuit against New York City claiming they were exposed to toxins and not issued respirators that cost less than $50 each.

The rescue workers’ ailments, which have spurred the creation of the $20 million World Trade Center Health Registry, could result in a multi-million dollar legal settlement and untold billions in medical costs including those for female rescue workers who have developed breast cancer.

Michael Bender is director of the Mercury Policy Project in Montpelier, Vt., which is working to eliminate mercury pollution that can exacerbate fibromyalgia, multiple sclerosis and other conditions for which women, in particular, are at increased risk. He says a major hurdle to precautionary environmental efforts is the lack of involvement by corporations.

"Right now, the burden is on the consumer to show products are harmful before the government goes after the manufacturer," Bender says. "We hope to reverse this so companies must prove a new product is safe before they put it on the market."

Activists at the conference discussed the possibility of requiring manufacturers to issue "performance bonds" to government that would serve as security deposits against any possible menace their products might pose to the environment and public health. If products proved toxic, government authorities would keep the bonds to clean up any mess or pay any associated medical bills. If they proved safe, the manufacturer would be refunded.

A small but growing number of U.S. companies are electing to take environmental precautions on their own initiative.

To encourage more manufacturers to follow suit–and to continue the dialogue begun at the conference–the Center for Health, Environment and Justice plans to hold regional public meetings on environmental precautions in coming months.

Germany forbids paper mills from bleaching products with chlorine and Sweden does not allow toy manufacturers to use phthalates. Neither safeguard is in place in the United States.

The European Union is considering legislation that would require manufacturers to assess the environmental impact of a new product before marketing it. On June 16, the Geneva-based World Health Organization fueled support for this measure by releasing a report that shows 24 percent of diseases globally are caused by environmental exposure that can be averted. That exposure contributes to the deaths of 13 million people each year, including 6.1 million women.

Women’s eNews Celebrates with Our 21 Leaders 2006 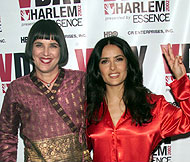