(WOMENSENEWS)–Lucy, a 38-year old supermarket manager in South Africa, used to have a full-time job with health and retirement benefits. She was in line to be promoted to middle management. Most important, she was able to save money for her children’s college education.

Then her mother-in-law had a stroke. In order to care for her, Lucy–whose story is included in a report on women and poverty released last week by the United Nations Development Fund for Women–shifted to part-time work, not only cutting her salary but also losing her pension. To make things worse, the loss of income reduced her children’s education prospects, making it harder for them to look forward to a decent livelihood and build a better life for themselves.

For the authors of the report, Lucy’s predicament illustrates both how women’s employment can help keep a family out of poverty and the precarious nature of the jobs women in both the developing and developed worlds hold.

As the United States celebrates Labor Day today, the report’s authors emphasize that too many of the world’s women are ending up in low-paid, insecure jobs that don’t keep them or their families from poverty.

Last week, the U.S. Census Bureau reported that despite economic growth, an additional 1.1 million Americans fell into poverty during 2004. The number of women in poverty increased for the fourth consecutive year since 2000, reaching 14.3 million in 2004, according to an analysis of Census data released by the Washington-based National Women’s Law Center. Meanwhile another 800,000 workers were left without health insurance.

Women’s wages in the United States also continue to lag behind men’s. In 2004, women who worked full-time earned 76.5 percent as much as men. The gap would be even wider if part-time workers were included in the analysis, since more women than men hold those jobs, according to the Institute for Women’s Policy Research.

The U.N. report points out that because women in most societies are still expected to combine paid employment with unpaid caretaking of family members, they frequently take flexible, low-paying jobs, often in the informal sector.

Women’s unpaid work in the home also often channels them into insecure and frequently unregulated occupations such as domestic work, child care and garment manufacturing work. As a result, women face a greater risk of poverty than men despite participating in the work force.

Focusing on Quality of Work

The report’s authors argue that while many efforts to alleviate poverty promote the entry of more women into the work force, it is perhaps more important to focus on exactly what kind of work women are finding and address the gender inequality women experience through work.

"Globalization has created more jobs, some of them preferable to more traditional opportunities such as domestic work, but it has also created new forms of informal and insecure employment," says Martha Chen, one of the U.N. report’s authors and coordinator of Women in Informal Employment: Globalizing and Organizing, a global research policy network at Harvard University.

She adds that companies often seek out female workers because they perceive them to be a source of cheap, unskilled labor, more docile and less organized than men.

Marked by small or unregistered enterprises, lower wages and work agreements that lack formal contracts or social protections such as Social Security, paid leave and health benefits, informal employment carries a greater risk of poverty than formal jobs with stable incomes and protections.

Official economic data on informal work is still hard to come by, but international organizations in recent years have started to pay more attention to the role that sector plays in development. Chen, however, says that women’s role in the informal economy has not received much attention. Without accurate information on the costs and benefits of women’s work in the informal economy, Chen argues that economic policies will be uninformed and misguided, undermining women’s economic security.

Between 1993 and 2003 the number of women in paid employment around the world increased by 200 million. Women represent 40 percent of the labor force in East and Southeast Asia, sub-Saharan Africa, the Caribbean and the developed world.

Women still make up a third or less of the labor force in North Africa, Western Asia, and Southern Asia, as well as Central America.

Latin America has seen the largest increase in women’s labor participation, from little more than 25 percent in 1980 to 33 percent in Central America and almost 40 percent in South America by 1997.

The U.N. report questions whether the increased numbers of women in the labor force translates into women being better off.

Workforce statistics, say the authors, fail to measure the kind of work women engage in, what they earn and what benefits they receive. Policies that focus on economic growth, they say, don’t necessarily create jobs that will help lift people out of poverty.

The authors argue that what workers need–particularly low-wage female workers–are policies to help people in the informal economy, which has been growing in both the developed and developing worlds. In developing countries between 50 percent and 80 percent of nonagricultural employment is informal. When farming work is included, that figure can be as high as 93 percent.

As an example of salutary policy, the authors herald a 2003 labor law in Ghana that provides temporary and casual workers with the same medical benefits of permanent workers and requires any temporary worker who has worked for the same employer for more than six months to be treated as a permanent worker.

Sixty percent or more of women in the developing world who work outside of the agriculture sector are concentrated in the informal economy, where jobs such as domestic work, street trading and sub-contracted production of consumer goods tend to be low-paying and lacking in security, benefits and legal protections, the report found.

In the United States, self-employment, part-time work, and temporary work account for 25 percent of all employment. This informalization of employment around the world has been attributed to companies preferring a flexible work force to help them compete globally.

In order to cut labor costs and maintain a work force that can adapt to fluctuations in demand, private companies are hiring workers under insecure contracts or subcontracting work to individuals, particularly women working at home who have to bear the brunt of production costs, such as paying for their own sewing machines, electricity and water.

Within the informal sector there is a hierarchy as well, with employers who run small informal enterprises and their employees earning more than self-employed workers and workers who carry out sub-contracted work at home for garment, textile and electronic companies. Among these, women are disproportionately represented in the lowest-paying categories, and even within those categories they earn less than men, further increasing their risk of poverty.

"Whatever the causal factors, this pattern of feminization of the labor force is not conducive to reducing poverty or enhancing equality," the U.N report concludes. 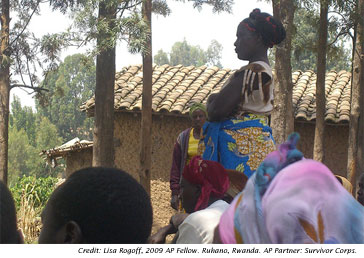