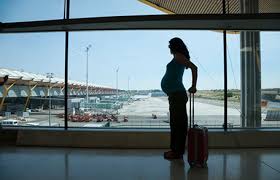 According to America’s Voice , policy and legal experts gathered on a press call yesterday to discuss the ramifications following Trump’s new rule that could ban women from visiting the U.S. just because they are pregnant or could become pregnant. In another attack on women’s reproductive rights, Trump and his administration have attempted to wield more xenophobic and misogynistic power to cast off women, particularly women of color, visiting from non-visa-waiver countries.

Here are the opinions from leaders representing a number of major organizations regarding the new rule:

Ur Jaddou, Director of DHS Watch and former USCIS Chief Counsel, America’s Voice, said, “To be clear about the absurdity of this new and overly broad regulation, let me restate it. Under this new regulation, women, not men, just women, now have a higher burden to travel to the United States just because they look pregnant or may become pregnant. If the State Department was trying to contain the discrimination and absurd breadth of this new regulation through new policy guidance issued on Friday, they failed. The fact remains, even with the policy guidance, consular officers are still empowered with broad discretion to deny women visas to travel to the United States because of their bodies and their natural ability to have babies.”

Ann Marie Benitez, Senior Director of Government Relations, National Latina Institute for Reproductive Health, said, “The Trump administration’s recently published pregnancy ban is just one more attack on the well-being of immigrants and women of color. Since the start of their term, this administration has been sending the message that those populations are not welcome here. A few examples of this: the rule expanding the definition of public charge has led to an increase in the number of families deregistering, and this leads to lasting impacts on their health and safety; another example is the detainment of pregnant women by ICE. These examples illustrate how this political climate is taking a toll on immigrants’ well-being. We believe immigrants are bestowed with inherent human rights – freedom of movement, health care, and the fundamental right to establish families with dignity and unity. Instead of these policies, we should have policies that respect the dignity and agency of immigrant women.”

Kristin Rowe-Finkbeiner, Executive Director and CEO, MomsRising.org, said, “Pregnant women already face an unconscionable level of discrimination in our workplaces and our society.  Trump’s new rule would codify pregnancy discrimination by turning our government into reproductive police who invade the privacy and assault the dignity of women seeking to enter the United States. As mothers, we cannot and will not stand by for this attack on pregnant women, women of color, and women seeking to enter the United States.”

Sung Yeon Choimorrow, Executive Director, National Asian Pacific American Women’s Forum (NAPAWF), said, “This ugly development is ultimately an issue of racial profiling of Asians. The Trump administration will go to any lengths to demean immigrant women. Millions of Asian people come to the U.S. to visit their families and targeting them because of their race or country of origin is discriminatory and wrong. This administration has a track record of detaining pregnant people and has made it impossible for victims of domestic violence and sexual assault to seek asylum. There is no justification for the harm they have done to immigrant women or for their xenophobic agenda.”

Dorianne Mason, Director of Health Equity, National Women’s Law Center (NWLC), said, “This policy does nothing more than penalize pregnancy and women. It is an invasion of women’s privacy that creates potentially insurmountable barriers to life-saving care. As with many of this Administration’s policies, its burden will fall most heavily on immigrant women of color; signaling yet again that if you are too brown, too black, or too poor, you are not welcome here. Women and girls have the right to dignity, autonomy and lives without discrimination. Pregnancy or potential pregnancy should not be weaponized to keep people out of this country. We condemn this repugnant regulation of women’s bodies.”

Dr. Ghazaleh Moayedi, OB/GYN and Board Member with Physicians for Reproductive Health, said, “As someone who holds the identity of a physician, a woman of color and a first-generation American, I am angry and horrified by this recent travel ban. This travel ban is the very definition of discrimination. Having cared for thousands of pregnant people, I know first-hand that pregnancy is not a national security threat. Being of child-bearing age is not a national security threat. Babies are not a national security threat. To suggest that our communities seek to deliver our children in this country only to groom them to harm Americans is not only baseless, but also dehumanizing. Pregnancy is never a reason to bar someone from entering a country. Pregnancy is only the concern of the person who is pregnant, and if they choose, their family and health care providers. The long line of attacks on immigrants has created a culture of fear and often keeps people from trying to access health care when they need it. I call for everyone, especially health care providers, to speak out against this rule.

The full recording of the call can be found here and via link: http://bit.ly/2t2jaOp

Frank Sharry is the founder and executive director of America’s Voice, an immigration reform group.