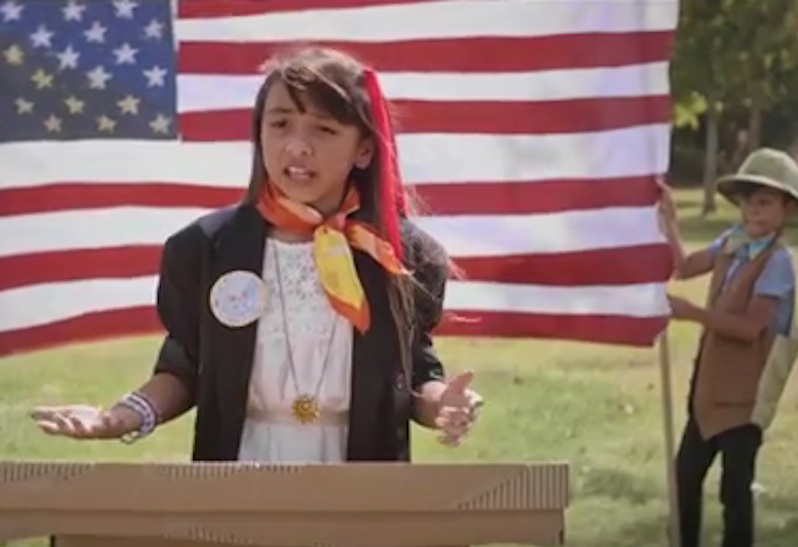 PHOENIX (WOMENSENEWS)–Kayla Brown, 17, looks at a thick folder of material ready for alphabetization at the Phoenix office of the Arizona Democratic Party.

“I just want to do whatever I can to make a difference,” she says, referring to her volunteer work for the political party.

Brown is only one and a half months into her work, but sees how volunteering on the local level is part of her eventual trajectory.

“One day, I’d like to be in Congress, so this is kind of like a starting point,” she says, gesturing to the files. “I saw, in this election, in general, certain negative attitudes towards women, which I’m hoping I can change through holding office.”

Brown is one of the numerous girls for whom the recent presidential election piqued interest in politics. This interest may help close the political gender gap, as women currently comprise only 19 percent of the U.S. Congress. This is a statistic that Brown and many other girls and women hope will change after the 2018 mid-term elections.

There has been a “huge positive trend” in the number of politically-interested girls in the last several months, according to Anne Moses, president of IGNITE, a national organization that provides skills and networks for politics-bound girls.

“It’s the silver lining of the election,” she says. “We’ve seen an enormous uptake in the number of young women contacting us who want to run for office.”

The let down for many from the loss of Hillary Clinton combined with President Donald Trump’s sexual harassment bragging has helped motivate girls and women into the political arena. “A lot of attitudes were exposed in this election that spurred interest,” Moses says.

The challenge of breaking the status quo is also appealing to some teens. Many were inspired by watching Clinton. “In this election, role models like Hillary Clinton showed me that being a girl doesn’t prevent me from working in certain fields, like politics,” says Divya Vetticaden, an eighth grader in Phoenix.

“It’s a push to work harder and achieve that goal of becoming a public figure despite having all odds pitted against you,” says Tazeen Ulhaque, a sophomore at BASIS Ahwatukee, a charter school also in Phoenix.

As a newbie in the world of politics, Ulhaque cites the misinformed, offensive and often hateful reactions of political extremists as a motivating factor in her future potential political career, to perhaps become “a representative or senator.”

“I feel like there has to be a way to quell that hate and fear and anger,” she said in an email interview.

Ulhaque is looking for an opportunity to get involved in politics where she can make an immediate difference. “I don’t want to phone bank,” she says, “I’d rather trail blaze.”

This attitude is exciting for Moses from IGNITE. “Young women feel like they have to get involved at every level,” she says of political participation and engagement of teenage girls after the election. “They’re running for boards, organizing their community around issues they care about. A lot of our young women engage in voter outreach.”

This work can also help some of these teens’ own political careers. After getting involved with IGNITE in high school, Shaitaj Dhaliwal, now a student at UC Davis, went on to run for a seat on her college’s student Senate. “I won,” she says.

Amrita is a 15 year old author from Phoenix. In her free time, she enjoys writing, running and petting dogs.