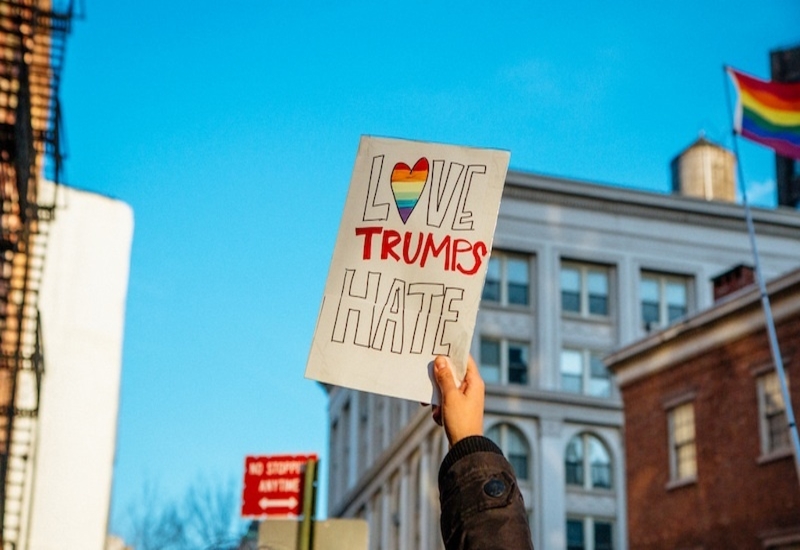 (WOMENSENEWS)—In the few week’s since he’s been in office, President Donald Trump’s America has proved to be maddening.

In this new reality, the nation’s president throws Twitter temper tantrums; his surrogates make up facts to fit their spin; and the LGBTQ community never knows where we stand. Last week began with Trump expecting our gratitude and praise. In an odd press release, Trump asserted that he would not roll-back the Obama administration’s executive order that offers workplace non-discrimination protections to federal employees and contractors.

While the news partially came as a relief, I don’t sleep any easier at night. In fact, we have plenty of reasons to continue to stay vigilant and motivated in our resistance.

First, we cannot trust this new White House, even when they tell us they aren’t going to attack LGBTQ rights. It was only two days after the press release when rumors began that Trump will be signing the most sweeping license to discriminate imaginable in the form of a new so-called religious freedom executive order. The leaked version of that document, which broadly defined religious organizations and offered them “religious freedom” across a wide spectrum, was so egregious and disgusting in the lengths it reached to legitimize hate and bigotry. But by week’s end, the final order had not yet been signed. And, who knows if it will be.

Second, Trump’s policies, actions and rhetoric against women are deeply troubling. During his campaign, his misogyny was on full display, including audio tapes of him boasting about sexual assault. He has made no attempts to build a dialogue or policy overture on women’s issues. And his team is certainly hostile to women’s health care and reproductive rights.

Speaking of Trump’s team, they too are reason to worry. The officials Trump has nominated for both secretary positions as well as his first Supreme Court nominee promise to be problematic for our values. We know, for example, that Congressman Tom Price of Georgia, Trump’s nominee for secretary of health and human services is steadfast in his opposition to LGBTQ equality and rights. In addition, he is a staunch advocate to repeal the Affordable Care Act, which has helped over 20 million Americans access quality affordable health care, including improving coverage for countless LGBTQ Americans. Betsy DeVos, who was just confirmed as secretary of education, has supported anti-LGBTQ organizations in the past and has indicated a willingness to roll back protections for survivors of sexual assault. We also know that Alabama Republic Sen. Jeff Sessions, the presumptive next attorney general, has a long voting record against LGBTQ Americans. Of course, that is in line with his hostility towards civil rights in general.

Trump’s U.S. Supreme Court nominee, Judge Neil Gorsuch, is no better. If confirmed, he will evaluate cases and issue decisions about the constitutionality of laws impacting both women and LGBT Americans, such as North Carolina’s HB2 law, which forbids any city from providing anti-discrimination protections to LGBTQ citizens, and Mississippi’s HB 1523, a law that allows merchants and government employees to cite religious beliefs to deny services to LGBTQ citizens. He will evaluate civil rights protections and prohibitions on discrimination, as well as rule on religious freedoms. There’s reason for concern as, most notably, Gorsuch ruled in the Hobby Lobby case that the Affordable Care Act’s contraception mandate violated an employer’s religious rights under the federal Religious Freedom Restoration Act and articulated an expansive view of religious liberty under the act.

Not Living in Silos

As LGBTQ women, we are – and must be –part of an intersectional progressive movement. We do not (and must not) live our lives in silos. This means finding offense and fighting against all of Trump’s hateful and wrong policies. When he signs the order to “build a wall” or ban Muslims, it affects us all. We have friends and lovers who will be kept out of our lives and our country because of him. When he says he’s fine with defunding Planned Parenthood, it affects us. We ourselves (and the people we love) take advantage of the services Planned Parenthood provides, from birth control and Pap smears to hormone treatments. Planned Parenthood is also often one of the only culturally and clinically competent health care options for the trans community in many parts of the country.

When Trump says that millions of people voted illegally (in the election he won) and decrees it will be investigated, his purpose is to deny voting rights for people who are not white, heterosexual, affluent men and women. When he says that he is nominating a Supreme Court justice in the mold of the late Justice Antonin Scalia, understand that he’s OK with overturning Roe v. Wade–the Supreme Court decision establishing a woman’s constitutional right to access abortion–or marriage equality or voting rights for millions of us and our friends and loved ones.

We don’t celebrate our supposed good fortune at the expense of our brothers and sisters who are being targeted. We stand beside them in solidarity. We stand behind them in understanding and listening. And we stand in front of them to protect them from the attacks coming from this president, his government and law enforcement. That’s what this means for us as members of an intersectional community that — for now — has been given a reprieve.

Beth Shipp is the first executive director of LPAC, the lesbian Super PAC that builds the political power of lesbian, queer, bisexual and transgender women by electing candidates who champion LGBTQ rights, women’s equality and social justice. She is a political strategist with more than 20 years of experience working for women’s reproductive rights, Democratic candidates and progressive causes. Prior to joining LPAC, Shipp was the political director for NARAL Pro-Choice America for 10 years. Prior to her arrival at NARAL, Shipp worked on a variety of federal and state campaigns throughout the nation. Her experience includes working on congressional, gubernatorial and U.S. Senate campaigns in Alabama, Georgia, New Jersey, North Dakota and Pennsylvania, and local and legislative campaigns in Virginia.