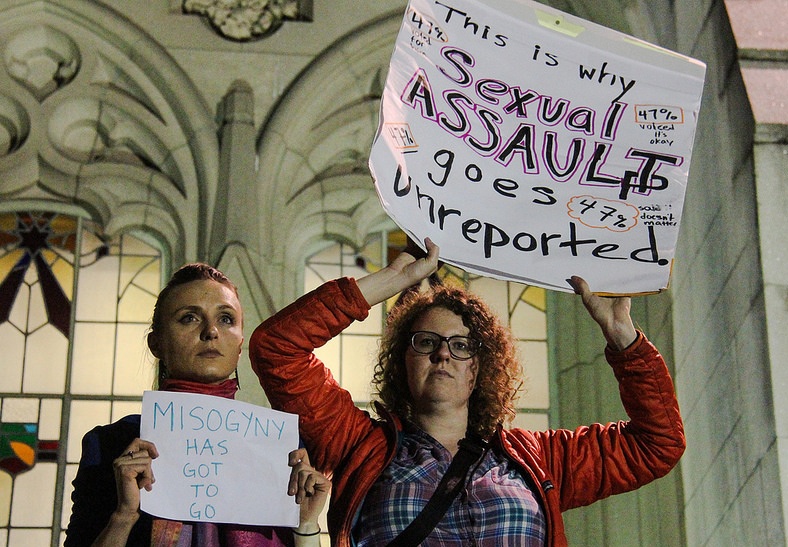 Anti-Donald Trump protest in Seattle the day after the Nov. 8 election.

(WOMENSENEWS)–With the election of Donald Trump to the presidency and his conservative agenda, the American women’s rights movement is organizing for battle. The Trump campaign for president had no platform reflecting women’s issues, a major omission for activists long advocating for a feminist agenda.

Many of Trump’s most visible supporters were anti-choice and opposed to funding Planned Parenthood. Others articulated right wing ideology that included repealing the Affordable Health Care Act, rounding up immigrants to deport them, reducing Social Security and Medicare benefits and repealing climate control programs.

The Trump transition team recently requested information from the State Department about staff who work on issues affecting women and girls and how much has been spent on these efforts, raising concern among some advocates over why this information on successful international gender equity programs begun by Hillary Clinton when she was secretary of state was wanted.

With the election of Trump, the work to achieve gender equality continues to move forward on many fronts and is more vital than ever. Whether organizing, marching or advocating for public policy, the women’s movement will not retreat. If anything, it will organize even more.

Demonstrations occurred after Trump’s victory and are now being planned in a more coordinated way. Clinton received 2.8 million more popular votes than Trump and many of those women and men who voted for her will express their frustration at her defeat, among other things, on Jan. 21 by marching in Washington, D.C., and other cities around the country. The organizers of the Women’s March have declared:

“The Women’s March on Washington will send a bold message to our new government on their first day in office, and to the world, that women’s rights are human rights. We stand together, recognizing that defending the most marginalized among us is defending all of us.”

In the lead up to the marches, the organizers have released a very progressive platform, including statements on reproductive rights, ending violence, LGBTQIA rights, immigrant rights and environmental justice.

California, my home state, alone has 14 cities where marches will occur. My community of Santa Barbara County will be sending over 1,000 people to the march in Los Angeles, according to Lisa Guravitz, board member of the Santa Barbara Women’s Political Committee.

Besides this highly anticipated national march, in response to Trump’s election other demonstrations and efforts are also being developed. For example, this spring the Feminist Majority Foundation will start organizing walks for “equality to put women in the Constitution.”

“This election has shown the urgent need for an equal rights amendment to the Constitution,” Kathy Spillar, executive director of the Feminist Majority and executive editor of Ms. Magazine, told Women’s eNews.

These marches are a wonderful opportunity for women’s voices to be heard but more is needed in the policy arena. (Men are invited and will be participating in the marches also.) Well before the Time of Trump, many gender equity efforts had been resonating in local and state governments.

Commissions on the Status of Women, for example, have long been active nationally depending on their funding, resources and number of individuals who filled commission seats. In California, the San Francisco Commission for Women has a history of feminist action. In 1998, San Francisco became the first city to adopt a local ordinance incorporating the principles of CEDAW, the international women’s bill of rights. Countries that ratify CEDAW are mandated to condemn all forms of discrimination and to ensure equality for women and girls.

As a result of adopting CEDAW, a task force was created by the city of San Francisco and guidelines for gender analysis developed. The San Francisco Commission then developed a series of strategies to meet the specific needs of women. Today, San Francisco has programs dealing with women’s human rights (human trafficking), violence against women and women in the workplace. These efforts have resulted in increased protection and safety as well as employee benefits for women in the city.

While San Francisco is following the principles of CEDAW, the U.S. is one of a few countries that has never adopted the treaty. Consequently, in 2014, the Cities for CEDAW Campaign was initiated because activists realized that gender equality could best be achieved locally. The purpose of this grassroots campaign is to protect the rights of women and girls in cities and counties in the U.S. by getting municipal jurisdictions to adopt CEDAW. To date, over 250 mayors have supported a CEDAW resolution; while 60 cities and counties have adopted a CEDAW ordinance and/or passed supportive resolutions, according to the NGO Committee on the Status of Women/New York and Cities for CEDAW.

In Los Angeles, Mayor Eric Garcetti issued an executive directive in August 2015 for all departments to implement CEDAW, which the city had passed in 2004. Each department was to submit a gender equity action plan by February 2016.

Garcetti’s commitment to establish gender equity programs in L.A. has revitalized the City Commission on the Status as it is charged with coordinating the gender equity coalition created by the directive.

Mayor Garcetti’s lead staff for gender equity, Tanya Pineda, reports that in the near future the mayor’s website will provide an update on their CEDAW work. It will include highlights from the mayor’s work on gender equity, past and present; information learned from departmental action plans; and a CEDAW toolkit for use by other jurisdictions that are considering similar actions.

Also in L.A., County Supervisor Sheila Kuehl convened a group of experts to focus on the issues of women and poverty, violence, health care access and equal pay. Called the Women and Girls Initiative, the board of supervisors voted on Dec. 13, 2016, to approve a five-year program that will address these concerns.

During a press conference, Supervisor Kuehl said: “My motion, co-authored by Supervisor Hilda Solis, asks the county to use its vast talent and resources — a nearly $29 billion budget, 100,000 employees and 37 county departments — to better understand and work to alleviate the disproportionate disadvantages suffered by women and girls in our county.”

On the East Coast, Mayor Bill de Blasio announced a gender equity commission for the city of New York in 2015. The purpose of the commission is to support: “City agencies in dismantling institutional barriers for women and girls in order to achieve the mayor’s commitment to reduce gender-based inequity. CGE (the Commission on Gender Equity) develops and supports policies that promote opportunities for women and girls in all areas, including employment, housing, child care, education, health and reproductive justice, criminal justice and public safety.”

The city of New York and the UN Women in 2014 also signed an agreement to work together in order to enhance the safety and empowerment of women and girls. Specifically, the city agreed to support some public education and advocacy efforts organized by UN Women.

Many of these campaigns across the country began before Trump was declared president-elect last year. They will hopefully continue to gather steam. It may be the best opportunity women have to achieve gender equity in the Time of Trump.

Susan Rose served for eight years on the Santa Barbara County Board of Supervisors and is the former executive director of the Los Angeles City Commission on the Status of Women. She is a co-founder of the Women and Leadership Program at Antioch University Santa Barbara. She writes from California about women's rights, work and family issues and governance.