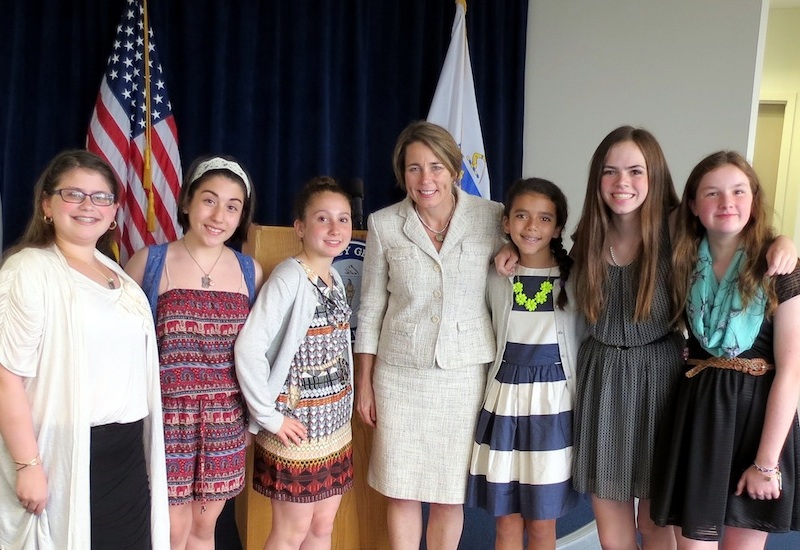 PITTSBURGH (WOMENSENEWS)–Eleanor Anderson was proud to be an American when she found out that the United States has been influential in bridging gender equality gaps in countries like Kenya and Cambodia. So it was a surprise for the eighth grader to learn that her own country’s Constitution doesn’t provide equal rights for women.

Last January, Eleanor, now 13, learned about Alice Paul, who proposed an Equal Rights Amendment (ERA) to the Constitution in 1923 and catalyzed the movement surrounding it. Eleanor was shocked to find, after watching the documentary “Iron Jawed Angels” in her seventh grade English language arts class, that Paul’s efforts are still unresolved.

In the same Quincy, Massachusetts, classroom sat Veronica Bentley. After watching the movie Veronica said she was “angry that men in a sense were handed the rights to everyday life just because [they] were wrongly thought to be the superior gender.”

Eleanor and Veronica, along with classmates Julianne Sheehan, Grace Akkara, Alessia Mochi and Ilkim Gumus, stayed after class to ask their teacher what they could do about the problem.

The six girls began meeting regularly, calling themselves the Yellow Roses after a significant suffrage symbol from Paul’s time. With reasons ranging from ending wage discrimination to garnering support for the fact that women are, as Veronica said, “useful and equal,” the Yellow Roses researched the bill to see how they could rally for its passage.

Unfortunately, the Roses found that “a lot of people have forgotten about the ERA,” as Yellow Rose Grace said in an email interview.

To help the bill regain footing, the Roses have called the 15 states that didn’t ratify the ERA before its original 1982 deadline, contacting “Women’s Issues” staffers in each state. Nine said they would support such an amendment this time around. The six states that didn’t voice support for the ERA in the Yellow Roses calls “were not able to say yes or no because they didn’t want to speak for their legislator,” said Grace. None of the staffers reported their bosses being opposed the amendment.

A nationally representative sample of 1,071 people showed that 94 percent of Americans support the amendment, according to a poll by the ERA Coalition and Fund for Women’s Equality.

The ERA would be the 28th Amendment to the Constitution if it were to be ratified and it would, according to Resolution 52 in the 114th Congress, explicitly outlaw “denying or abridging equal rights under the law on account of sex.”

“We don’t want to live in the world when we get older where women are not respected enough to be considered equals, and we don’t want our kids or grandchildren to live in a world like that,” said Yellow Rose Veronica.

Despite the fact that President-elect Donald Trump has not stated women’s rights as part of his political agenda, the Yellow Roses have faith for the future of the bill. “It is even more important to rally the passage now because if we put in that extra push we may be beginning a whole new chapter in American history. If we continue to fight for what we believe in we will catch the attention of the government,” said Yellow Rose Julianne.

Grace added,”Even if the president-elect is not for the ERA it’s not really up to him. It’s in the hands of Congress now and all we can do is let Congress know this is something the people care about so they can do something about it.”

ERA co-sponsor and Congresswoman Jackie Speier told Teen Voices that “the Equal Rights Amendment has never been as important as it will be in 2017. I can only hope that as our country looks to our new president he will keep in mind his own daughters and that he makes the protection of their rights and all women’s rights a real priority in his administration.”

The next step is to raise awareness so that the ERA can be brought back into Congress for a vote, using either the “traditional” or “three-state” strategy. There are two ways the bill could pass: In the House, the ERA can be voted on through the Judiciary Committee or by a discharge petition. In the Senate, only the Judiciary Committee can hold hearings to vote on whether the legislation should move forward. That way, it can be voted on by the full chamber.

The three-state strategy is based on the idea that despite a shortage of state support (35 out of 38 required states) before the ERA’s 1982 deadline, the amendment’s eligibility for ratification does not cease due to the passage of time. Since the deadline has been extended in the past, from 1979 to 1982, this strategy raises the question of whether Congress could recognize post-deadline votes for ratification.

“It is incredibly significant to have the Yellow Roses rallying around the Equal Rights Amendment,” said Bettina Hager, co-chair of the Washington, D.C.-based ERA Task Force, which has guided the Roses through their activism. “Americans think that constitutional equality for women and girls already exists. It is difficult to encourage people to speak out if they are unaware. The Yellow Roses’ work can be shared with other young women and help the ERA gain traction.”

Among those whose support for the ERA the Yellow Roses confirmed was former 2016 Democratic presidential nominee Hillary Clinton. Even with her presidential loss, her support of the bill is important, said Hager. “If she could go into an advocacy role, she’d be very strong.”

Despite outreach attempts from the coalition, president-elect Trump’s position on the ERA remains unknown.

“We’ll have to watch how policy will be played out, and how it affects the ERA. Current policy protecting women’s rights is vulnerable to political whims,” said Hager. “It’s kind of a new territory we’re going into–it makes us believe as an organization that the ERA is more important than ever.”

Natalia Young, 17, goes to Bethel Park High School in the Greater Pittsburgh Area. She has been published in the Pittsburgh Post Gazette.