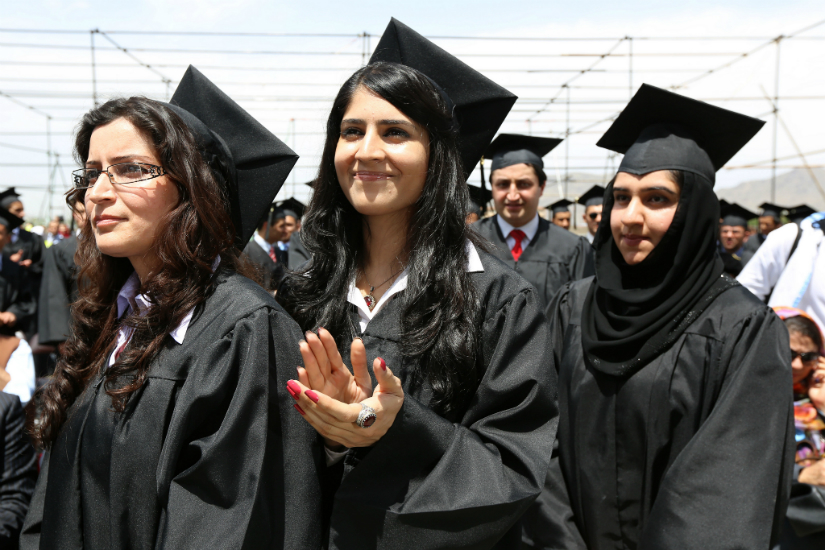 It was almost a month ago today exactly. The fourth day of my second semester. My last class finished at 6:20 p.m. I expected to meet a friend, but she did not come, so I finished my dinner and went to the mosque to pray. At 7:04 p.m., I had just finished praying when three explosions went off two meters (about 6.5 feet) from the mosque. The air turned dark, the ceiling fell upon us. It was hard to breathe. Seconds later, gunshots began. I could not believe what seemed clear: the American University of Afghanistan was under attack.

After two minutes, the firing stopped and a small group of us girls fled the mosque bare-footed, running to the nearest building. We looked for a place to hide, but there was none. Then we heard shots from the second floor, and some girls began to shriek. The sounds of gunfire came from everywhere. We were trapped. I ran to the exit of the building, but before I could reach it, there was more shooting. This time I flattened myself to the ground and covered my ears tight, trying to prevent the sounds of violence from reaching my mind.

After 30 seconds I looked behind me. All the girls I’d been with were wounded. Then I saw a man holding a gun walking on the other side of the hall. “Alia, now it is finished,” I told myself. “There is no way to escape.” I lay flat, listening for a long time to the horrifying sounds of the gunman firing at the students. The hall was in complete darkness; I tried to calm myself so that I would not shake. I could hear each step the man took. He was uniformed just like the university’s guards, but he was firing at students. It was a confusing sight.

For several hours I stayed in the same place. The Taliban had the keys for each room of the building. They opened one room after another and took students upstairs. They must have thought I was dead. I kept hoping the that police would come save me, but after three hours I gave up and started to think about my last dreams.

I could hear the attackers singing songs. I was unable to stop myself from shaking in fear. Gunmen walked past us every 10 minutes. It was around midnight when one of them started firing everywhere again. They were talking out loud. They were saying, “Where are all these police? Why don’t you come here and fight like a man?”

The nearer the bullets got to me, the more debris from the floor was hitting my legs. I suddenly couldn’t keep my legs still; I moved them, and the firing stopped. I heard laughter and knew they must have seen me; they would shoot me now. I said my last words and prepared to die. I waited and waited, but they did nothing. They did not shoot me.

Now the Taliban kept entering the room about every 30 minutes. Four boys who had pretended to be dead at first surrendered themselves, and the Taliban shot one of those boys. I told myself, “If I am supposed to die, why die alone? Why not surrender myself so that I die with my fellow students?”

At 1:30 a.m., I decided I would surrender. I would shout that I was alive. The Taliban was upstairs so I waited for them to return. Then the door in front of me opened and four men entered the hall. They were whispering.

I thought they were Taliban, so I said I was alive and wanted to surrender. They said, “Be quiet, we are police.” They took me out of the building. My feet hurt to walk. I felt shards of glass in them. I was taken to the nearest hospital. I was saved.

I still feel some kind of fear inside. The Taliban attacked the most prestigious university in Afghanistan, showing their opposition to education. But I know we students must find our bravery, stand beside AUAF, and tell the Taliban that AUAF is alive and will prevail, becoming even stronger.

Alia, 16, is a writer with the Afghan Women's Writing Project.