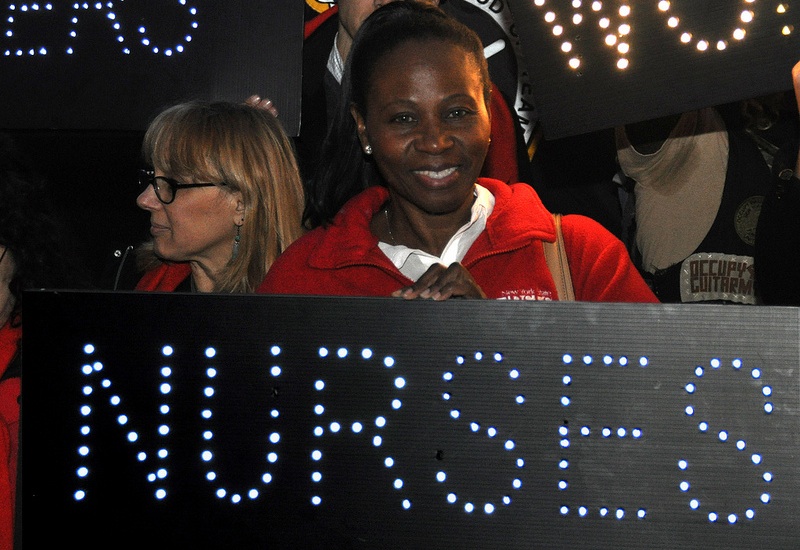 (WOMENSENEWS)—The presidential candidates’ double-barreled fight for the votes of disaffected workers has arrived in five states holding primaries on April 26.

At stake in Connecticut, Delaware, Maryland, Pennsylvania and Rhode Island are 172 GOP delegates and 463 Democratic delegates who will determine whether the forerunners, Republican Donald Trump and Democrat Hillary Clinton, maintain their leads after winning the New York primary April 19.

Except for Delaware, all of these states have a higher percentage of union members than the national average of 11 percent.

Three of the most active unions in the campaigns in these five states have memberships that are predominantly female: the National Nurses Union, the American Federation of Teachers and the National Education Association.

Patricia Eakin is president of the Pennsylvania Association of Staff Nurses and Allied Professionals, based in Conshohocken and with 6,000 members. She says that although fewer Americans belong to unions today—14.6 million, down from 17 million in 1983, according to the Bureau of Labor Statistics—union members, especially women, are playing an important role in Pennsylvania, which remains a union stronghold.

“For decades, unions have fought for livable wages, paid sick leave and other economic issues that benefit all workers, not just union members,” Eakin said in a recent phone interview. “They have also worked for workplace reforms like safe staffing ratios in hospitals that protect the public. Now these issues are front and center in the 2016 presidential campaign.”

Eakins says both parties are targeting workers who are struggling financially. “Many of these workers are women who are employed in health care, retail sales and other low-wage industries or public sector workers who are predominantly women.”

In 2015, unions in Connecticut and Delaware led the fight to pass equal pay legislation. The Connecticut statute prohibits employers from discriminating or retaliating against employees who discuss their wages and increases remedies paid to victims of discrimination. The Delaware law requires contractors to pay their employees equally.

Although Bernie Sanders has been a leading advocate for labor legislation in Congress for more than 25 years, Clinton has received the lion’s share of the endorsements because many unions believe that the former secretary of state has a better chance of winning the general election in November.