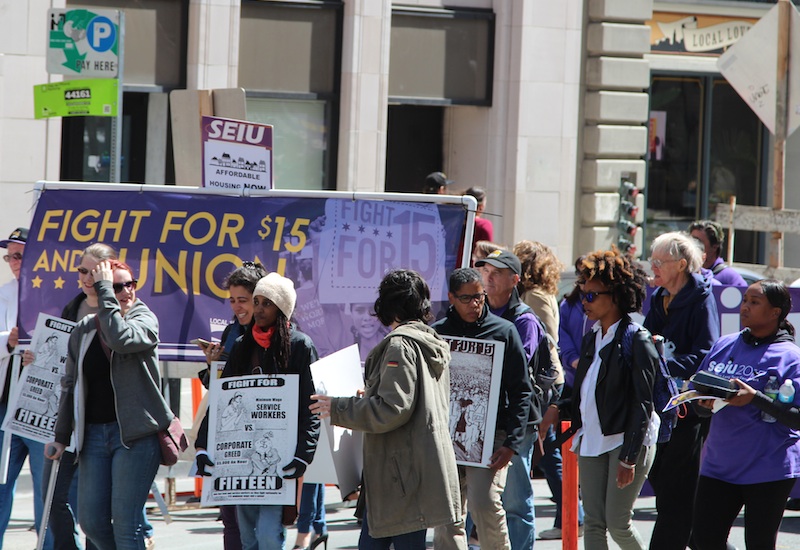 OAKLAND, Calif. (WOMENSENEWS)— A day care provider and mother of three in North Carolina who has spent the past two years living in local shelters. Another child care worker in California struggling to afford care for her own infant daughter and continue her education. A Florida-based home care worker in her 50s putting in 60-hour weeks and still setting almost nothing aside for retirement.

Those women are three among tens of thousands of workers across 320 cities who participated in demonstrations on April 14 linked to the Fight for $15 movement, which advocates for higher local minimum wages for the 64 million Americans who make less than $15 an hour.

Buoyed by recent high-profile legislative victories in California and New York, Fight for $15 is now placing greater emphasis on unionizing and expanding its focus to related quality-of-life issues such as housing and early childhood education, according to organizers.

“We’re just getting started,” said Arnulfo De La Cruz, a provisional officer with the Service Employees International Union, or SEIU, the powerful union representing about 2 million service sector workers. The SEIU has backed the Fight for $15 and is now reportedly working on an agreement with Airbnb, the world’s largest hospitality company, to employ unionized home cleaners who are paid at least $15 an hour.

The campaign is picking up energy from the highly charged presidential primary process moving through the country.

“It’s pretty amazing that a conversation that started in the streets ended up at the highest level we could imagine,” De La Cruz said of the attention being paid to minimum wage during recent presidential debates. “The participation of our community is going to be crucial in the upcoming election; it could be the deciding factor.”

Among the remaining presidential candidates, Democratic contenders Hillary Clinton and Bernie Sanders have said they support a $12-$15 minimum wage, while the Republican hopefuls oppose raising the federal minimum, arguing it will hurt job growth.

The Fight for $15 is not officially backing any one candidate, though that didn’t stop a few April 14 demonstrators in Oakland from making their opinions known.

Two women unfurling a Sanders banner stood just a few feet away from the battered remains of a Donald Trump piñata.

Campaign organizers say politicians at every level of government would do well to heed the call for fair wages—or risk finding themselves out of a job.

Kendall Fells is the national organizing director for Fight for $15 and was part of the wave of demonstrations by several hundred fast food workers in New York City in late 2012 that jumpstarted the campaign. He now travels the country in support of the effort.

“We said ‘$15 and a union,’ not ‘$15 or a union’,” Fells said in a phone interview from the airport the week after the demonstrations, referring to the campaign’s tagline. “Folks are going to regroup now, take stock of their successes and figure out how we can get to $15 in every state in the country.”

Many of the Fight for $15 participants previously lacked faith in the political process, said Fells. Support from lawmakers such as New York Gov. Andrew Cuomo, “showed workers, ‘oh, that’s how a politician can really affect your day-to-day life.’ Now we’re figuring out how to make sure people take that [realization] to the ballot box in November.”

Since 2012, Fight for $15 has expanded beyond the fast-food industry and drawn huge participation from workers in other low-wage fields such as home care and child care—both of which are heavily dominated by women and minorities.

Women stand to benefit at disproportionate rates if the minimum wage goes up. A bump in the federal minimum wage—currently $7.25 an hour—to $12 by 2020 would result in higher pay for 35.1 million Americans, according to a report published last summer by the Economic Policy Institute. Nearly 56 percent of those affected would be women, and 40 percent of working single mothers would receive a raise, the report said.

Eboni Warren, a young mother and child care worker in Berkeley, California, said she would welcome relief from living paycheck to paycheck. “I’ve been doing this for nine years and it’s hard to provide care for my daughter and schooling for myself,” she told Women’s eNews at the Fight for $15 demonstration in Oakland, which she attended with her 1-year-old daughter.

Warren has mixed emotions about the new California law, which doesn’t cover her or many other low-wage day care workers because they are considered private contractors. “I’m excited California got the $15, but now I want all of us in California to be able to get the $15,” she said.

On the other side of the country that day Scharlinda Bolden of Tampa, Florida, joined demonstrators at 6 a.m. outside a local McDonald’s, a company that has been a primary target of the Fight for $15 since the beginning.

A home care worker for more than two decades and now in her 50s, Bolden makes $10-$11 an hour and works as many as 60 hours each week at two part-time jobs to cover rent and help will basic necessities for her 2-year-old grandson.

“I’m a single mother who’s been working hard for a long time, and sometimes it feels like slave labor,” Bolden told Women’s eNews by phone. “We need a union and an increase in wages. We need insurance, retirement benefits and paid time off.”

For some, the needs are even more pressing. Tolanda Barnette works 40 hours per week as a day care provider in Durham, North Carolina, making $12 an hour, a wage that left her homeless two years ago.

Since then, the mother of three and her family have been living in shelters. She got involved with the Fight for $15 a year ago, and found an instant sense of camaraderie.

“You never know how similar your situation is to others’ until you start getting your voice heard,” she said in a phone interview.

Both Barnette and Bolden said they are optimistic after the wins in California and New York, as well as gains such as the one in Pittsburgh, where UPMC health system, the region’s largest employer, recently agreed to boost its entry-level wage to $15 an hour over the next three years. “We are winning,” Barnette declared.

Bolden, for her part, said she’s paying close attention to what the current crop of presidential candidates are saying about minimum wage. “I’m listening for someone who is really supporting us,” she said.

Robin Hindery is a reporter and editor based in the San Francisco Bay Area.