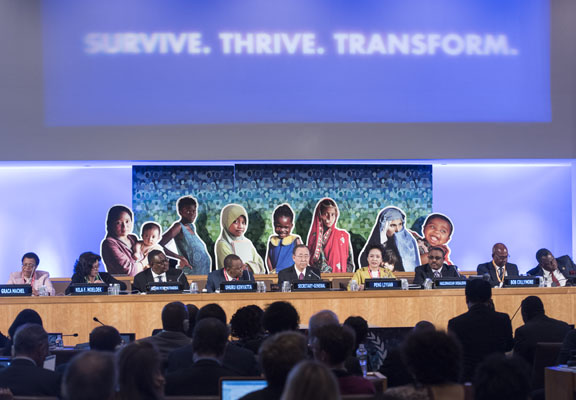 The launch of the new Global Strategy for Women's, Children's and Adolescents' Health at the U.N., Sept. 26, 2015.
Politics

But how successful will the new U.N. framework be in raising global living standards? Enthusiasts put faith in technological innovations. Skeptics say the global economic system is inherently exploitive and unjust and needs a real overhaul.

(WOMENSENEWS)– If the newly minted U.N. blueprint for global peace and prosperity by 2030 were a bit glitzier, people around the world might take more notice of it and offer more support.

So goes the thinking behind #GlobalGoals, an infotainment campaign to frame the U.N.’s new agenda for economic and social development as something that everyone should be excited and optimistic about.

Trading in the wonkish official name Sustainable Development Goals (SDGs) for the hashtag-friendlier Global Goals, the campaign aims to make the goals fun and accessible, especially to those under 25 who make up 60 percent of the world’s population.

The last few days have produced an outpouring of financial and policy commitments to gender equality initiatives.

At a gathering co-hosted by UN Women and China, Liberian President Ellen Johnson Sirleaf committed last weekend to making sure a bill in her country to combat domestic violence is passed into law.

President Xi Jinping of China promised to enhance gender equality as “basic state policy” and provide more health care, vocational training and financing for education to women and girls in other developing countries.

The complete list of commitments made by 80 countries so far can be found here.

U.N. Secretary General Ban Ki-moon told the General Assembly earlier this week that the new and more numerous SDGs “Don’t just add goals. It weaves the goals together, with human rights, the rule of law and women’s empowerment as crucial parts of an integrated whole.”

Over the weekend Ban introduced a strategy to end preventable deaths of women and children by 2030, laying out policies to provide perinatal care, immunizations and access to sexual and reproductive health services.

In line with the SDGs’ “leave no-one behind” mantra, the strategy looks at the problem of preventable maternal and young child deaths in its social and environmental context, relying on data broken down by many different factors to highlight the most vulnerable groups. It also emphasizes working with humanitarian actors to better reach those living in fragile settings such as conflict zones.

The secretary general emphasized that avoiding these preventable deaths requires action beyond simply improving health care. “We know . . .  [it] means investing in girls’ education. It means ensuring access to a nutritious diet for mothers and children all year round. It means registering every birth and death, and much else besides,” he said. Of course it also means ending physical and sexual violence against women.

The 17 broad Global Goals, which include 169 specific targets, renovate a set of similar 15-year goals launched in 2000 called the Millennium Development Goals. The retiring eight MDGs claim significant achievements. They raised one billion people out of poverty (narrowly missing the target to cut the rate in half), achieved gender parity in primary education and halved the population without access to clean drinking water. But it missed by a long shot the goals of reducing maternal mortality by 75 percent and child deaths by 63 percent. Overall, they have been deemed a decent effort but not nearly as impactful as hoped. (See an article in The Guardian for the complete breakdown.)

Among the goals that world leaders agreed to at last weekend’s gathering to ratify the SDGs, or Global Goals, is No. 5, to achieve gender equality by 2030.

Plenty of people are saying gender equity lies at the heart of all the Global Goals, because it is fundamental to the underlying mission of peace and prosperity for all.

Without it, as President Barack Obama and others have made the case over the past few days, it will be impossible to eradicate poverty and hunger or reach most of the other goals that 193 world leaders adopted on Sept. 25.

Women’s equality requires more opportunity for women to actively participate in the economy though paid work and access to financial services like bank accounts and credit. Many events this week focused on extracting commitments to empower women economically.

“Achieving gender equality by 2030 is an ambitious, but realistic goal in the modern age and the private sector has a critical role to play,” said Jack Ma, executive chairman of Alibaba, a Chinese e-commerce and online auction company often referred to as the “Chinese e-Bay” that co-hosted a forum on businesses and philanthropy with the Bill and Melinda Gates Foundation and UN Women.

A host of large companies from Coca-Cola to The Gap to Unilever heeded the message by announcing new pro-women and sustainability policies affecting their direct employees and workers in their supply chains.

With each pledge, executives reiterated how supporting women and girls is key to realizing the Sustainable Development Agenda, mingling a moral human rights imperative with the interest of businesses and governments. Melinda Gates, co-chair and trustee of the Seattle-based Gates Foundation, made the business case saying that every $1 invested in women’s health begets a return of $9.

“Women drive progress for all of us by demanding better health care and opportunities for their children and greater equity for everyone. That’s why, when we invest in women and girls, we’re investing in the people who invest in everyone else,” she said.

Many of those who expressed optimism about the new global goals put faith in emerging health care and telecommunications technologies as well as expanded trade opportunities (especially for small and women-owned businesses) to deliver on these goals.

Arancha Gonzalez, head of the International Trade Centre (a joint U.N.-WTO agency) told Women’s eNews about a new initiative using technology and geopositioning to locate every farmer around the world and assign them an identity number “which makes it easier for us to find them and help connect them to markets.” Women are the majority of the world’s small farmers. Gonzalez also recently announced a plan to connect one million female entrepreneurs to markets by 2020 as part of her commitment to funnel 40 percent of agency’s output to empowering women.

Skeptics, however, contend that the global economic system is inherently exploitive and unjust. Without a major overhaul that includes setting up a global framework for tax, finance and debt, none of these positive developments will be enough to eliminate poverty. Since women make up the majority of the extreme poor, this doesn’t bode well for their chance to be equal and empowered by 2030.

Eni Lestari is an Indonesian domestic worker and migrant rights activist based in Hong Kong.

On a panel with high-level representatives from Oxfam, Human Rights Watch and the World Wildlife Fund, who all more or less supported and praised the SDGs, Lestari’s scathing critique stood out.

“I’m sorry to say that the Sustainable Development Goals have failed to address the causes of poverty,” Lestari said. “They are trying to make monopoly capitalism a little better, to bring it back from the brink of collapse. To re-brand it.”

She blames the global financial crisis of 2008 for Indonesia’s privatization of public goods, mass unemployment, abolishment of food subsidies and increased debt. As a victim of human trafficking, she went on to speak with authority about the suffering of millions of people forced to become migrant workers after being pushed off their land in the name of “development,” noting that 85 percent of migrant workers are women.

She was gratified that intense lobbying by migrant activists led to the inclusion of a SDG target to “protect the rights and ensure safe and secure working environments of all workers, including migrant workers.” She also supports the gender equality goal. However, she does not believe either will amount to much given that the framework “provides no funding commitments and the indicators don’t look likely to compel governments to make real change.”

Ana Inés Abelenda, economic justice coordinator at the Association for Women’s Rights in Development, agrees. “For feminists and activists demanding a systemic transformation to global development, the 2030 agenda is weak on providing the financial and structural changes needed to make this outcome document a reality,” she said in a press statement.

In response to the criticism of weak financing, Amina Mohammad, U.N. special advisor on post-2015 development planning and the face of the Global Goals, said a conference in Addis Ababa, Ethiopia, in July that addressed how to fund the Global Goals was moderately successful and accounts for much of the $25 billion raised for the Global Strategy for Women’s, Children’s and Adolescents’ Health and allows partners gathering this week to shift the focus to implementation strategies.

The Global Strategy for Women’s, Children’s and Adolescents’ Health is a parallel initiative to drive the SDGs forward, especially with respect to women’s and girls’ health. The partnership includes 40 countries and over 100 public and private institutions, including philanthropic foundations, nongovernmental organizations, U.N. agencies, and private businesses.

This new initiative builds on the work of “Every Woman, Every Child,” formed in 2010 to ratchet up the lackluster progress on meeting the Millennium Development Goals on reducing child and maternal mortality. The initiative claims to have saved the lives of 2.5 million women and children in the five years since its launch.

“We seized the opportunity to make a course correction and mobilized countries and partners,” Flavia Bustero, assistant-director general for the World Health Organization, told Women’s eNews in an email interview. “As a result, investment increased, silos among different sectors were broken and deaths of mothers and children fell in the targeted countries.”

The Organisation for Economic Co-operation and Development, the Paris-based group of 34 developed countries, launched Tax Inspectors Without Borders, a partnership with the U.N. that sends audit experts to work alongside developing country tax officials to strengthen tax audit capacity. They also set up a forum through which 127 countries are working to tackle cross-border tax evasion.

Notwithstanding, rich and poor countries alike lose billions of dollars in tax revenue, according Nobel Laureate Joseph Stiglitz, which hurts developing countries most.

In an op-ed for The Guardian Stiglitz cites Apple, General Electric and Google, a sponsor of the Global Goals, as having “a genius for avoiding taxes that exceeds what they employed in creating innovative products.” He goes on to write that it is increasingly important for developing countries to be able to “tax these behemoths on the profits generated by business that occurs within their borders.”

Would you like to Send Along a Link of This Story? https://womensenewsp.wpengine.com/2015/10/global-goals-put-women-at-heart-of-poverty-battle/ 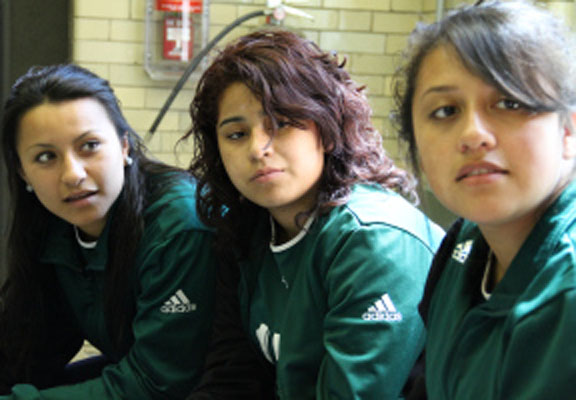 Finitzo Scores with Documentary ‘In the Game’ 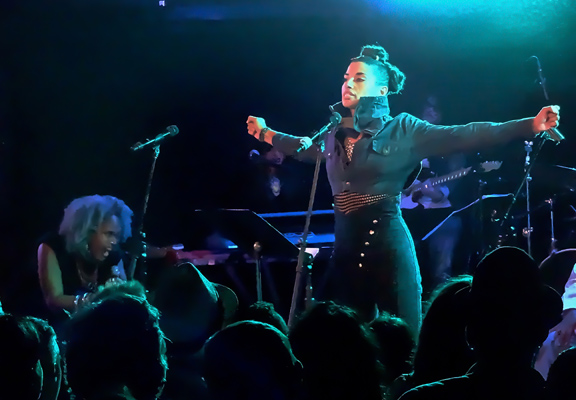