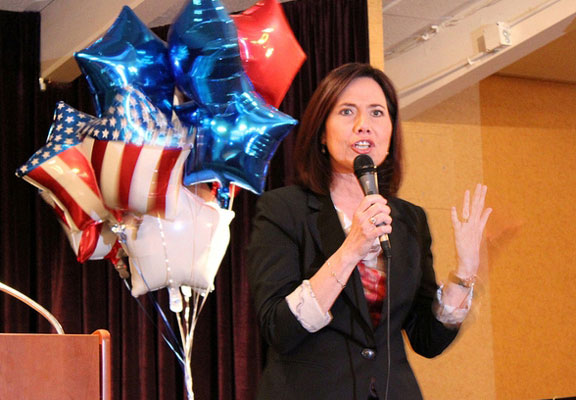 (WOMENSENEWS)–Two Californian congressional candidates are carrying some of the GOP’s hope for improving its female ranks by the end of the year.

Both Elizabeth Emken and Mimi Walters have been tapped to receive special training and support through the GOP’s Project GROW (Growing Opportunities for Women).

Electing these women is key to Republican hopes of widening a 17-seat majority in the House of Representatives. The party is eager for Emken to take back the seat of Ami Bera, one of four seats it lost to the Democrats in 2012, and also for Walters to retain the seat of John Campbell, who is retiring after serving for 14 years.

The 53-member California delegation–the largest in the House–wields considerable power. Nancy Pelosi is the minority leader and Kevin McCarthy is the Republican whip.

The Democratic caucus, which has become more diverse since the 1990s, now includes 18 women and 20 men. The Republican caucus has remained a male bastion: all 19 members are men.

California is one of the most difficult states for House candidates because it has a “jungle” primary system. The top two vote getters in the primary compete in the general election regardless of political affiliation. This system poses ideological as well as fundraising barriers for GOP women, who tend to be more moderate and have fewer financial resources than do their male opponents.

“Female candidates across the country generally have a more difficult time raising funds than do male candidates because they don’t have the sources that men do, although this is starting to change as women move up in their fields,” said Debbie Walsh, director of the Center for American Women and Politics at the Eagleton Institute at Rutgers University in New Brunswick, N.J.

“Facing multiple challengers in a primary can quickly drain a female candidate’s finances,” said Walsh in a phone interview. “Running in a district where the cost of media is high can be prohibitively expensive for women.”

Elizabeth Emken is looking for her first victory in the race against Rep. Bera, a freshman Democrat who beat a longtime Republican incumbent in 2012.

Democrats have a 2 percentage point advantage in voter registration in the district, which includes the suburbs of Sacramento, the state capital.

Fundraising may plague Emken. In addition to Bera, who raised $3,632,282 in 2012, Emken faces two Republican challengers in the primary on June 3: Doug Ose, a former congressman, and Igor Birman, chief of staff of Rep. Tom McClintock, R-Calif. Ose represented a large portion of the redrawn district from 1999 to 2005.

As of Dec. 31, Bera had raised $1,373,106; Emken, $450,999; Ose $378,452; and Birman $247,573, noted the Center for Responsive Politics. Bera, the only Indian American in the House, was recently named to the Democratic Congressional Campaign Committee‘s Frontline Program, which provides financial support to vulnerable Democrats.

Emken has denounced Bera as an “Obama foot soldier.” Unlike Bera, a physician who supports the Affordable Care Act, Emken has backed repeal because she says health care inequities can be better addressed through tax reforms. As a lobbyist for autism research, Emken backed provisions of the Affordable Care Act that would benefit the two million Americans who have the condition.

She also believes that the disabled and seniors have a right to opt out of Medicaid and Medicare.

Emken opposes same-sex marriage, which resumed in the state after a 2008 state ban was overturned by the Supreme Court in June 2013.

The mother of a son with autism, Emken lobbied the U.S. Congress for 14 years before she made her first foray into politics in 2010. In 1996, she and a group of parents of children with autism met with Sen. Barbara Boxer, D-Calif., to stress the need for more research funds for the condition, which the Centers for Disease Control and Prevention says affects 1-in-88 children in the country.

As a legislative consultant and board member of Cure Autism Now, a Los Angeles research advocacy group, she helped pass the Advances for Pediatric Autism Research Act, which became part of the Children’s Health Act of 2000. In 2006, Emken also led a campaign by 19 autism organizations to pass the Combating Autism Act, which authorized $1 billion a year, beginning in 2007, for five years for research, screening and treatment.

In 2010, Emken came in last of four Republicans competing for the 9th District seat of Rep. Jerry McNerney, founder of a company that manufacturers wind turbines. In 2012, she made a bid for the U.S. Senate by challenging Democrat Dianne Feinstein, California’s senior senator, and won only 37 percent of the vote.

Fundraising was a major hurdle because the party provided little support. Unlike Feinstein, who had $865,541 in cash on hand, Emken started from scratch, raising a total of $914,350, reports the Washington-based Center for Responsive Politics, which tracks campaign financing.

Emken’s largest contribution totaled $10,000. Only 1 percent of contributions came from political action committees, compared to 23 percent for Feinstein, who had served on key committees, such as Appropriations, Intelligence and Judiciary.

A California state legislator, Mimi Walters, will face two GOP challengers in the June 3 primary for the seat of Campbell, who emphasized decreasing earmarks and reducing government spending.

All three are fiscal conservatives. John Moorlach, an Orange County supervisor, sounded the alarm before Orange County went bankrupt in 1994. A retired marine colonel, Greg Raths‘ website says he would be “open to curbing expensive weapons systems, like the F-35 fighter jet, a $137 million plane which is not performing.”

The district includes Irvine, Mission Viejo and parts of Anaheim and Orange. Republicans have a 15-percentage-point advantage in voter registration. So far, no Democrat has filed to run.

Walters ran for state treasurer in 2010 and gained name recognition. She also has the endorsements of two influential California Republicans–Rep. Darrell Issa, chair of the House Oversight and Government Reform Committee, and Rep. Ed Royce, chair of the House Foreign Affairs Committee.

In February, Walters was endorsed by the New Majority California PAC, the largest GOP PAC in the state. The Center for Responsive Politics reports that the PAC contributed $1,107,798 to candidates from 2006 to 2012.