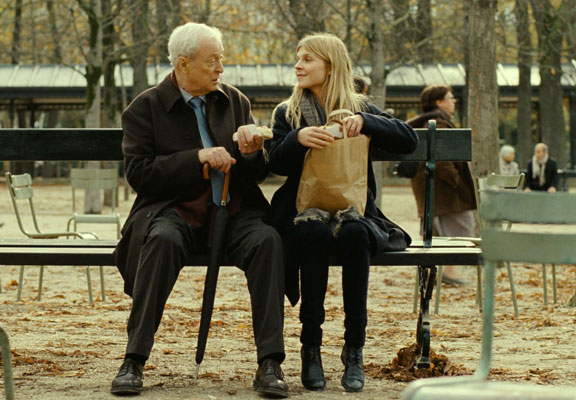 The touching film stars Michael Caine and Clémence Poésy in a winter-spring friendship. It opens today, Nov. 1, along with “The Pervert’s Guide to Ideology” by filmmaker Sophie Fiennes.

(WOMENSENEWS)–It’s November so get ready for films targeted for the holidays and awards consideration.

Sandra Nettelbeck’s “Last Love,” opening Nov. 1, is deeply affecting. Written and directed by Nettelbeck, the film is based on Francoise Dorner’s novel about a winter-spring friendship between a retired, recently widowed and very depressed American philosophy professor (Michael Caine) and a younger and lonely cha-cha teacher (Clémence Poésy). Against a background of scenic Paris sights, they get to know each other bit by bit, until he, in a moment of lingering despair, downs too many sleeping pills and winds up in the hospital. Arriving to attend to their father, the professor’s son (Justin Kirk) and daughter (Gillian Anderson) want to know how his new companion fits into their family structure. The denouement is sweet and surprising, but no spoilers here. Caine and cast are superb, and issues about familial relationships, aging, grief and reconciliation are presented in a most loving and respectful way.

“Le Week-End” is a delightfully mature romcom in which an aging and rather melancholic British couple (Jim Broadbent and Lindsay Duncan) return to Paris for their 30th wedding anniversary. He wants to rekindle l’amour; she’s trying to figure out how to tell him she wants to call it quits. But circumstances escape from their usual routine and a chance encounter with an old colleague (Jeff Goldblum) guide them into a new realm of companionship and understanding with many endearing outbursts of humor. Duncan and Broadbent deliver superbly charming and subtle performances, enhancing the film’s broadly comedic moments. Director Roger Michell deftly paces the film to give you time to recover between laughs.

“Diana,” a biopic based on Kate Snell’s “Diana: Her Last Love” (2001), focuses on the last years of Diana, Princess of Wales (Naomi Watts). It covers some of her public life and good works, but mostly focuses on her secret love affair with Pakistani heart surgeon Dr. Hasnat Khan (Naveen Andrews), the man with whom she was involved before Dodi Fayed. While Diana attracted media frenzy, Khan shunned the limelight. Despite laudable performances by Watts and Andrews, the film presents their doomed relationship as a sad series of tension-filled bouts of bickering, alternating with making up. It feels like a soap opera, not a real look at two enormously interesting characters.

“Musicwood” is a wonderful documentary about the vulnerability of guitar making to the global environmental crisis. Filmmaker Maxine Trump follows a trio of the world’s best guitar-makers — Chris Martin of Martin Guitars, Dave Berryman of Gibson Guitars and Bob Taylor of Taylor guitars – as they travel from their ateliers to the rainforest that’s the source of the wood they use to make their instruments. There they try to persuade local Native American loggers to protect endangered trees and assure the future of the acoustic guitar. Negotiations are gripping. There’s also a fascinating history of guitar making and yes, a soundtrack full of brilliant guitar playing. See and listen to this one!

“Casting By…” is a documentary tribute to casting director Marion Dougherty (1923-2011), who was the first woman to become vice president of a major Hollywood studio and who mentored many other women to work successfully as casting directors in an industry that tends to treat women as second-class citizens. Bette Midler, Glenn Close and a host of other stars thank Dougherty in the film for giving them their first break, and directors Martin Scorsese, Woody Allen and others praise her contributions to their films. But their appearances are topped by Dougherty’s own, with insightful comments that chronicle Hollywood history. If you love movies, this one is a must-see.

“The Pervert’s Guide to Ideology” is filmmaker Sophie Fiennes’ follow-up to her entertaining “The Pervert’s Guide to Cinema,” a documentary collaboration with Slovene scholar and pop culture analyst Slavoj Zizek. In his appearances in the films, Zizek assails the subject of cinema – and, now, ideology – from a psychoanalytical point of view, explicating cultural symbols, deeply rooted in the human psyche, that recur in favored films. Whether seen together or without reference to one another, the films are intellectually stimulating and often quite funny. Despite the humor, it’s quite clear that Zizek – and many of his highly credentialed academic colleagues – take his theories seriously. Whether you do, too, is up to you. But this intriguing commentary on popular culture deserves observing.

“A Case of You,” directed by Kat Coiro, is a new twist on the online dating mistaken identity plot. A guy (Justin Long) who falls for a gal (Evan Rachel Rood), who looks right past him, resorts to Facebook to introduce himself. In so doing he embellishes his profile to present himself as her ideal date; a man whose likes and dislikes actually bear no resemblance to his own. When she falls for him, he’s forced to sustain the pretense, or lose her forever. Where does the relationship go? See the film to find out. No startling insights, but it’s cute, romantic and has plenty of social relevance.

In “Ass Backwards,” co-scripters June Diane Raphael and Casey Wilson co-star as two oddball lifelong best friends who’re driving across country to their hometown. There they plan to participate in – and win – the 50th anniversary reunion of the beauty pageant they’d lost when they were youngsters. The road trip is humorous, if a bit predictable, but you’re bound to laugh at the two high-octane comediennes. Alicia Silverstone–playing their girlie nemesis–gives a sterling performance as the original pageant winner who’s gone on to win in life and organize the reunion. I just wish they had a better vehicle to roll out their talents. “Ass Backward” isn’t sufficiently smart to be a female take on “Dumb and Dumber” (in case one were even wanted). Nor does the film rise to the class and stature of “Thelma and Louise.” But Raphael, Wilson and Silverstone are very funny ladies, and they’re reason to see the film in theaters or on VOD.

“Go for Sisters,” written and directed by John Sayles, is a female buddy drama about childhood best friends who reunite in adulthood after their lives have taken them down decidedly different paths. After years apart, Bernice (LisaGay Hamilton) and Fontayne (Yolonda Ross) wind up on opposite sides of a parole officer’s desk. Bernice is the officer; Fontayne the parolee determined to kick her bad habits. When Bernice’s son disappears into the dangerous morass of the Los Angeles-Tijuana drug and human trafficking scene, the two women unite to find him before he’s killed by criminals or corrupt police. The women are strong and appealing characters, and the film is a good addition to Sayles’ excellent filmography. Go see it.

“Reaching for the Moon” is a biopic about American Poet Laureate Elizabeth Bishop, played by Miranda Otto. The film focuses on Bishop’s alternatingly ecstatic and miserable love affair with Brazilian architect Lota de Macedo Soares (Gloria Pires), who was at the same time involved with Mary Morse (Tracy Middendorf). The drama of their emotionally fraught and alcohol-imbued love triangle unfolds in the upper class glamour of 1950s Rio de Janeiro and its lush suburbs. This feverish scenario should be gripping, but the film is tepid, slow paced and stiffly stylish. Still, it’s an intriguing view of an American literary heroine and the intricacies of her life and times. Based on Carmen L. Oliveira’s “Rare and Commonplace Flowers” and scripted by Carolina Kotscho, Julie Sayres and Matthew Chapman.

Stay tuned for reviews of movies opening during the second half of November.

Would you like to Send Along a Link of This Story? https://womensenewsp.wpengine.com/story/arts/131031/last-love-offers-dance-grief-reconciliation 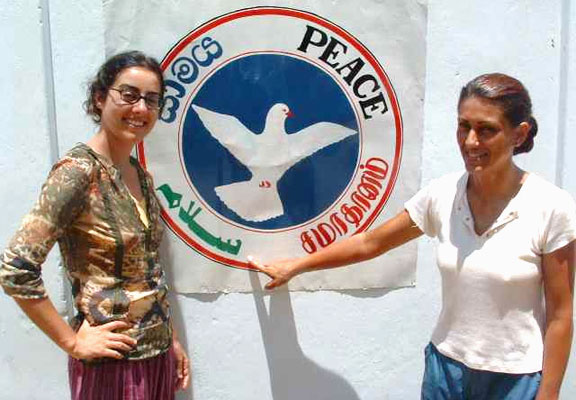