As the trial gets underway in Steubenville, Ohio, the two high school football players who stand accused are facing jail time in a juvenile facility until they reach the age of 21.

Trent Mays, 17, and Ma’Lik Richmond, 16, are charged with raping the female teen during an alcohol-fueled evening of partying last summer while she was too intoxicated to give consent or resist. The victim was allegedly raped both in the back seat of a moving car and in the basement of a house, the Associated Press reported. Mays is also charged with illegal use of a minor in nudity-orientated material.

Up to 40 witnesses may give evidence during the trial, including the alleged victim. “We just want this over with and out of our lives,” her mother said.

If found guilty of the crimes, Richmond and Mays will be added to the sex offender registry and will face jail time in a juvenile facility until age 21.

Defense lawyers are set to focus on the incidents being consensual. Jennifer Gentile Long, a former prosecutor and the director of AEQuitas, told ABC News that there is no “bright line” for how drunk a person has to be to be considered impaired enough to be unable to say yes — or no — to sex.

Problems also arise when victims do not report the incident to the police until hours or even days after the assault, which makes a precise level of incapacity very hard to determine. “These cases are very difficult,” said Long, who prosecuted sex crimes as an assistant district attorney in Philadelphia. “Defense attorneys can use a victim’s decision to drink on her own and extend it all the way up to blaming her for everything that happened.”

Parts of the attack were recorded, photographed and posted to Twitter after the incident took place, but no one intervened to stop it, according to The New York Times.

The footage from the night of Aug. 11 suggested that an unconscious female teen had been sexually assaulted over several hours. In one picture posted on the photo sharing network Instagram, the victim can be seen looking incapacitated and carried by her wrists and ankles by two male teens. Twitter users included vocabulary such as “rape” and “drunk girl” in their posts, The New York Times reported.

After the alleged rape, Alexandra Goddard, a blogger, tweeted messages and a photo taken from the night, naming the students who were present and saying that they committed a crime by failing to intervene during the assault.

Following an article on the case by The New York Times in January, a hacker group calling themselves Anonymous posted a video of a drunk bystander ridiculing the victim and saying she was “the dead girl.” The posted YouTube footage revealed bystanders uttering things like “she looks dead” and “she’s so raped;” others can be heard condemning the incident in the background but not intervening to prevent it.

The National Organization of Women has demanded that one student who recorded a long video in which he joked about what was happening that night be charged under the state’s “failure to report” law, the Associated Press reported. Attorney General Mike DeWine has called the video disgusting, but said the student didn’t have firsthand knowledge of the alleged assaults.

Would you like to Send Along a Link of This Story? https://womensenewsp.wpengine.com/story/in-the-courts/130314/victim-may-testify-at-steubenville-rape-trial 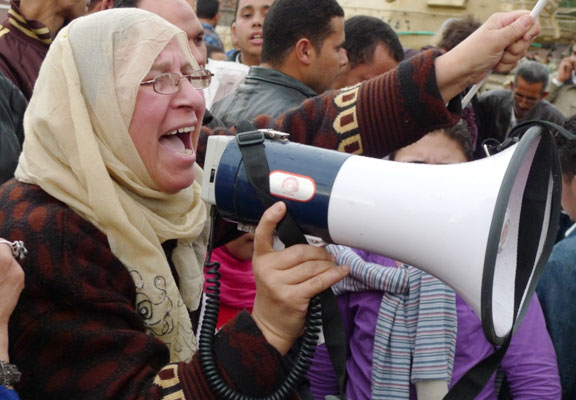 Arab Women Say Time for Saying ‘Spring’ Is Over