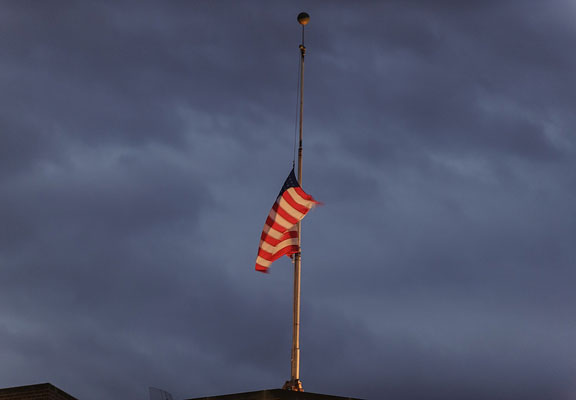 A flag flies at half mast for the victims of the recent shooting in Aurora, Colo.

(WOMENSENEWS)–Even though it was–once again–a man who went on a shooting spree, the national conversation following the mass murders on July 20 has so far failed to focus on the root causes of this latest lethal outburst: men’s mental health and how men are socialized.

Until we acknowledge those issues, we can only expect more tragic bloodlettings.

The massacre at the Century movie theater complex during a showing of “The Dark Knight Rises” in Aurora, Colo., ended with 12 dead and 58 wounded. The shooter, James E. Holmes, was arrested and remains in police custody. The multiple murders are the latest example of an expression of masculinity that society continues to ignore at its own peril.

All these years after Columbine High School shooters Dylan Klebold and Eric Harris killed 13 in Littleton, Colo. (1999); Charles C. Roberts murdered five girls in a one-room school house in Lancaster County, Pa. (2006); Cho Seung-Hui shot and killed 32 at Virginia Tech University (2007); and Steven Kazmierczak killed five and wounded 16 at Northern Illinois University (2008); isn’t it glaringly apparent what the killers have in common? No, it’s not that all the assaults occurred at schools and colleges. It’s their gender; they’re all men. (As is Anders Breivik, the Norwegian mass-murderer who killed 76 people a year ago.)

Men’s violence of the magnitude Holmes perpetrated needs more than news shows inviting pop psychologists on for analysis. We need a national teach-in on masculinity, attended by doctors, social workers, teachers, clergy, the judiciary, legislators and parents. And the facilitators need to come from the ranks of those who have been examining male behavior and working with men and boys for the past 30 years.

A society that socializes boys and men to disdain any emotion (except anger) and that glorifies violence–from video games to kicking Afghan butt–reaps what it sows. Even though the drumbeat of war and superpower bravado may not be front and center in a presidential campaign where neither major party candidate served in the military, our country’s love of dad’s blood and guts has always trumped mom’s apple pie.

Our gory American political narrative stretches from the boots on the ground army at Valley Forge to the antiseptic drone strikes in Pakistan. In an America equipped with all-volunteer armed forces that’s been at war perpetually since 9/11, maintaining a tough guise is paramount. How many of the male mass murderers were soldier wannabes?

The profile of 24-year-old Holmes has many similarities with the other male mass murderers. Neighbors and friends from Aurora, and Southern California where he grew up, told The New York Times he was “as anonymous as a glass of water” and described him as a solitary figure, always alone. “Alone as he bought beer and liquor at neighborhood shops, as he ate burritos at La California restaurant or got his car fixed at the Grease Monkey auto shop. Alone as he rode his bicycle through the streets,” the article reported.

In the wake of the killings, the calls for gun control–which the National Rifle Association for years has so successfully fended off–will get louder now; and a new uproar is good. Unfortunately, we probably shouldn’t expect wary election-year politicians to put their careers in the crosshairs by introducing any bold legislation. But that doesn’t mean citizens and courageous members of Congress shouldn’t try to press the issue, particularly now. For starters, let’s push for screening Michael Moore’s “Bowling for Columbine” at the Century Cineplex in Aurora, followed by a community conversation on gun violence in America.

Holmes shows us a society that still doesn’t acknowledge maleness as the singular characteristic tying together virtually every similar act of violence over the past 15 years. We knew it was masculinity two years before Columbine, when Luke Woodham, 16, killed two students and wounded five others in Pearl, Miss., in 1997, after first bludgeoning to death his sleeping mother. Then there were Mitchell Johnson and Andrew Golden, two middle school boys, 13 and 11, who killed five people, four female students and a teacher, at a school near Jonesboro, Ark., in 1998.

Heard enough? How much more evidence do we need? To paraphrase James Carville’s tagline when Bill Clinton first ran for president: “It’s the masculinity, people.”

The inconvenient truth is not just that all the assailants have been male but that, until we make that fact predominant, all the observations the forensic psychologists and the news programs trot out are pointless.

The conspiracy of silence about men and depression, too many men’s reticence to seek counseling, the health care community’s underreporting of the relationship between men’s mental health and a host of related problems–from alcoholism to heart disease–all have to be challenged. This is a campaign the Surgeon General needs to mount with all the resources that changed social attitudes about smoking. The current social compact about masculinity assumes that a minority of men like Holmes is an unavoidable part of male behavior. This is both untrue and unacceptable; there is too much collateral damage.

Of course society doesn’t explicitly say it sanctions horrific mass killings–except through our ongoing love affair with war, which, outrageously, is often described as “necessary” by some of the same people who are quick to say acts like Holmes are “senseless.” We have for too long compartmentalized these particular aberrant acts as a kind of “boys will be boys gone wild,” not as an endorsement but as an explanation of the inevitable.

We can no longer ignore the fact that too many men live lives of quiet desperation–it isn’t just the loner who doesn’t talk with anyone about life’s struggle. Most of us, at one time or another, have gone underground with our feelings as part of a misguided strategy to better negotiate our lives. Hopefully, we got help; or someone(s) who cared about us intervened. For too many men like Holmes, too often there is no one.

It’s time to draw a new social agreement about masculinity that pledges we will intervene with moody, shut-down, angry males and not just those found on our campuses or in offices and factories. Sadly, they are also in our elementary school playgrounds and walking the corridors of our middle schools. Schools start in a little more than a month. Just enough time for educators to begin planning how to identify troubled boys.

As you read these words, behind closed doors in tiny country towns, cavernous suburban ranch houses and dark apartments in big cities, lonely, angry, disconnected men are living lives of (sometimes noisy) desperation. How many more must lethally lash out before we acknowledge that men’s mental health is as serious a male health issue as prostate cancer? Mental health treatment for troubled men must rise to the top of the national agenda if there’s to be any hope of preventing future tragedies.

Holmes is not an aberration, not just a lone, crazed gunman. He is the latest canary in a deadly masculinity mine whose coldly calculated killing spree warns us of the risks we face if we don’t focus our attention on redefining masculinity. Now.

Rob Okun is editor of Voice Male magazine and a writer and psychotherapist living in Amherst, Mass. He can be reached at [email protected]

Would you like to Send Along a Link of This Story?
https://womensenewsp.wpengine.com/story/uncovering-gender/120724/aurora-rampage-shows-dangers-ignoring-mens-health 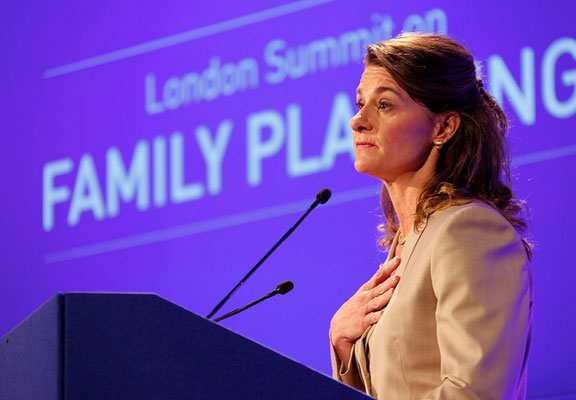