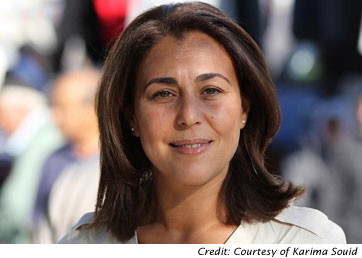 Karima Souid, a foreign-born deputy in Tunisia’s constituent assembly, has broadened the language of lawmaking to include dialectical Arabic, the common tongue. The first of three profiles of women playing active roles in post-revolutionary Tunisia.

TUNIS, Tunisia (WOMENSENEWS)–Karima Souid had little interest in politics a year or so ago.

But today, the 40-year-old French Tunisian tourism professional is one of the 217 representatives in Tunisia’s newly created constituent assembly, charged with writing a new Constitution within the year.

Souid is one of four female deputies elected to represent the center-left party Ettakatol party–the Forum for Labor and Liberties–which won 20 of the 217 seats.

In total, 59 women were elected among all parties in the assembly.

To ensure representation of women in the future assembly, Tunisia’s interim government required that half of all names on a party’s list be women and also that the lists alternated their candidates by gender.

Souid was born and raised in a suburb of Lyon, France, and was elected as a representative from abroad.

That means that Souid, along with 17 others deputies, represents voters of the Tunisian diaspora. Such deputies divide their time between the capital city of Tunis, where they spend three weeks a month, and the fourth week abroad with constituents.

Earlier last month she found herself plunged into the new assembly’s language politics.

Since the revolution, the linguistic identity of Tunisia has become an essential part of political discourse, particularly for the moderate Islamist party Ennahda. Its leader, Rached Ghannouchi, has called using French a "pollution" of Tunisian Arabic.

The new Tunisia seeks to break from France, which supported former President Ben Ali’s regime for decades, even after the outbreak of the popular revolution.

Formal Arabic is the official language of Tunisia according to Article 1 of the provisional constitution adopted in December, while French is the second most spoken language in the country. Tunisians typically communicate in both Arabic and French.

Souid of course is fluent in French. And like many Tunisians, she only speaks dialectal Arabic, the form spoken by her grandparents in Tunis.

A few weeks ago, when she found herself having trouble making an entailed, technical point in Arabic, she switched to French. Omar Chtiou, a member of the popular left-wing Congress for the Republic Party, strongly criticized her for using French within the assembly and reminded her of the need to respect the "Arabic and Muslim identity of Tunisians."

The rebuke set off a heated debate among several members of the assembly about the acceptability of languages other than formal Arabic.

"When it comes to technical questions, I feel indeed more comfortable speaking in French," said Souid, "That day, I used it and I was violently criticized by a deputy. But I hope it was more an overzealous attitude than a political calculation."

Souid used the incident to devise a way for deputies to work around the requirement of formal Arabic, which she says excludes thousands of Tunisians.

With another French-born representative, Sélim Ben Adelssalem, Souid proposed a procedural revision to provide parliamentary officers who can translate and interpret for representatives who haven’t mastered formal Arabic.

On Jan. 20 their proposal was approved, ensuring that all Tunisians, no matter their linguistic background, will be able to follow the assembly’s deliberations.

Souid was in France when the revolution broke out in December 2010. She followed events on the Internet via social networks.

"I wasn’t targeted by tear gas and I know that several died and sacrificed their lives, but something wonderful was happening," Souid said in a recent interview in a hotel in Tunis.

Although Souid was not previously active in formal politics, she said she has always cared about positive social change. When Ben Ali fled the country, Souid was overwhelmed by the hope of change and left France to go to her second country, Tunisia.

Once there, her political involvement intensified and she found herself drawn to the secularist stance of the Ettakatol party.

Souid, who is Muslim, said that religion belongs to the private sphere and that she refused to prove her religion to anyone.

France, she said, shows one side of excessive governmental intrusion in religion, where a Muslim’s religiosity can be criticized. She would hate to see the opposite extreme develop in Tunisia.

"French Muslims have already been stigmatized and even more since the election of Nicolas Sarkozy and I don’t want to live this again, here, in Tunisia," she said.

Souid shook off questions about any possible weakening of women’s rights, enshrined in law since 1957, now that the government is led by the Islamist Ennahda party.

"It is out of the question to change the Code of Personal status and Ennahda promised not to change it," she said.

"Tunisian women has always been strong, free and sure of themselves," she said. "Today, Tunisian women are even freer because now they have acquired the right of expression."

Would you like to Send Along a Link of This Story?
https://womensenewsp.wpengine.com/story/international-policyunited-nations/120207/souid-opens-lingo-lawmaking-in-new-tunisia 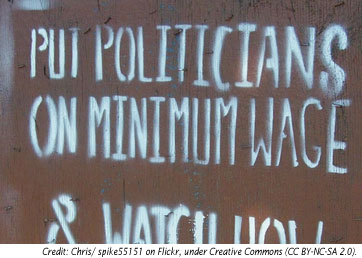 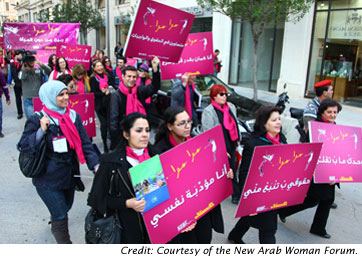