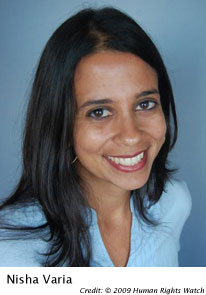 (WOMENSENEWS)–A vibrant democracy with raging debates about health care. A country that prides itself on pioneering medical treatment but continues to see shocking disparities between the wealthy, who can afford expensive, quality care, and the poor, whose access to health care is spotty or simply nonexistent.

This is not the United States, it’s India.

Inequality is one reason why India contributes more deaths than any other country to the global figure of 500,000 women and girls dying from pregnancy, childbirth or unsafe abortion each year. India is responsible for a quarter of these maternal deaths, the vast majority of which are preventable.

New research by the international organization Human Rights Watch shows not only the woeful state of government health services for the rural poor in India, but also serious shortcomings in how authorities count maternal deaths, investigate their causes and avoid repeating the same mistakes.

This shameful state of affairs is not happening in a resource-poor country with a health care system in shambles. Rather, India’s top hospitals and doctors show such prowess that it has become an increasingly popular destination for medical tourists unable to afford–or wait for– treatment in their home countries. I recently saw the Web site of an agency that offers to arrange anything from neurosurgery to bone marrow transplants, including holiday packages with visits to temples and beaches as part of the bargain.

The stark contrast was made clearer to me when I visited poorly-equipped, understaffed health clinics this year in rural Uttar Pradesh. The poor, northern state has one of the highest rates of women dying during or after childbirth.

If women in this state–and country–were rich Western tourists, they might be offered "state-of-the-art gynecological surgery…available with world class equipment and expertise using minimally invasive techniques," as advertised on that agency’s Web site.

But instead, one in every 70 Indian girls is expected to die because of pregnancy, childbirth or unsafe abortion, compared to one out of every 7,300 girls in the developed world. Routine emergency obstetric care procedures, such as blood transfusions and Caesarean sections, are far beyond the reach of poor women reliant on poorly resourced, poorly staffed and hard-to-reach government health facilities.

The Indian government has introduced many initiatives to improve health care for the rural poor, especially the flagship National Rural Health Mission. This program includes a focus on maternal health care, with "service guarantees" of free care before and during childbirth, in-patient hospital services, comprehensive emergency obstetric care, referral in case of complication and postnatal care.

In a critical lapse, however, the government fails to monitor whether these standards are actually being met on the ground and to ensure that women are aware that they are entitled to this care. The unacceptable results are that large numbers of women needlessly die or suffer disabilities.

For example, Uttar Pradesh has 583 fewer community health centers than the 1,097 required by Indian public health standards. Fewer than a third of existing centers have an obstetrician or gynecologist and about 45 percent do not have funds to operate even a single ambulance, according to government figures.

A key point of intervention to save women’s and girls’ lives is timely access to skilled emergency obstetric care. The Indian government has designated "first referral units" throughout the country to be equipped for such cases. However, only 1 in 20 of these units in Uttar Pradesh offer Caesarean sections and only 1 in 100 have a blood storage facility, a critical gap because hemorrhage and obstructed labor are frequent causes of maternal deaths.

It does not have to be this way.

Successes in other parts of India offer practical ways forward to increase political will, health system accountability and, ultimately, better and more accessible care for pregnant women. You can see this, for example, in the state of Tamil Nadu, where the maternal mortality level is a third of that in Uttar Pradesh.

Several steps could spur greater progress in Uttar Pradesh. These include counting and investigating maternal deaths, identifying systemic shortcomings and revising local health care management accordingly. The state should develop early response systems, including a telephone hotline for health-related emergencies and an accessible mechanism to pursue grievances and redress.

Donor countries, like the United States, and international agencies should also provide technical and financial assistance to promote these changes.

Reducing the ratio of maternal deaths by 75 percent is a global priority, one agreed upon by governments worldwide as part of the U.N. Millennium Development Goals, which seek to eradicate global poverty by 2015.

As the 2015 deadline approaches, the lack of progress grows more alarming. While in the past 20 years the numbers of children dying before the age of 5 has dropped by 30 percent, the proportion of maternal deaths has remained roughly the same.

As India’s private health facilities continue to make big business providing sophisticated health care to medical tourists, we too should make it our business to urge India’s government to provide comprehensive, quality care to all Indian women, whether rich or poor.

Nisha Varia is a senior researcher in the women’s rights division for Human Rights Watch.