Now Is the Time to Invest in America’s Caregivers

The economic stimulus package approved yesterday allows states to use work-force development funds to improve training for direct-care workers. This is a good step, says Karen Kahn, but this vital part of the work force needs more help now.

WASHINGTON (WOMENSENEWS)–The American Recovery and Reinvestment Act, signed by President Barack Obama on Tuesday, is still being pulled apart to see what’s in there and for whom.

Among what I see as a bright point: States may use some of the additional $4 billion in work-force development funds to expand and improve training for the nation’s direct-care workers.

In addition, it was good to see Montana Sen. Max Baucus on the floor of the Senate during the debate over the stimulus package, promising to address the needs of the eldercare work-force as part of health-care reform.

These are both good steps in helping the United States care for its rapidly aging population. But the federal government, along with states, must improve compensation as well as training and supports for direct caregivers.

PHI, the national nonprofit working to improve the quality of eldercare and disability services by improving the jobs of direct-care workers, calls on the government to:

As the United States contends with the worst economic recession in 50 years, one sector of the economy continues to grow: health care.

Within that sector, the fastest-growing jobs are in eldercare-disability services. Direct-care jobs–nursing assistants, home health aides and personal care attendants–are the employment core of this industry, and all three of these jobs are among the top 10 fastest-growing jobs in the country.

In the next decade, we will need at least 1 million new direct-care workers to care for America’s elders.

Direct-care jobs, therefore, can drive economic growth, but only if the federal government is willing to invest in jobs that pay family-sustainable wages, provide health benefits, and offer training and advancement.

Baucus and his colleagues should commit themselves to these principles in their health care reform plan.

Currently, 1 in 10 low-wage workers is employed in direct care. These workers spend an estimated $56 billion in their local communities. With higher wages, these workers could lift their families out of poverty while spurring the growth of small businesses in their neighborhoods. They could also feed their families, access health care for themselves and their children, and afford safe and secure housing without the government subsidies they currently rely on.

With 70 cents of every dollar spent on eldercare services coming from federal and state governments, most of these workers’ wages are set by Medicaid and Medicare reimbursement policies and channeled through long-term care provider agencies, some private and some nonprofit.

Due to the government’s low reimbursement rates and lack of accountability regarding how providers use these funds, care workers’ wages average just over $10 per hour. Annual earnings average about $17,000 and 1 in 4 direct-care workers does not have health insurance. Their training is often inadequate and they have few opportunities for career growth. As a result, 40 percent of direct-care workers live in households that receive some form of public benefits; for example, Medicaid, housing assistance or food stamps.

For years, to keep Medicare and Medicaid spending down, the government has supported a model of eldercare-disability services that relies almost entirely on the labor of poor women, many of them immigrants. As a result, the industry has suffered from the high turnover that is characteristic of low-wage jobs, leading to inconsistent and often poor quality care for consumers.

Direct-care workers assist older Americans and people with disabilities with a myriad of daily tasks, including eating, bathing and dressing. Despite high turnover and inadequate training, these workers are a lifeline, helping their clients remain independent and to live with dignity. They are also a lifeline for 15.9 billion workers who balance full-time employment with caring for a family member over the age of 18.

Usually, these low-wage health-care workers are told to wait, that their day for decent wages and benefits will come.

Many of America’s low-income women reach inside their hearts and find a way to do their work every day. But these women, and the people they care for, deserve more. And the world is beginning to realize this more and more.

In March, the U.N. Commission on the Status of Women will meet to discuss the global status of caregiving. Among their stated concerns is that "care of children, the elderly and the disabled must be promoted by society as a whole and recognized in government policy."

President Obama, meanwhile, has primed us to expect change in this specific area.

Last year, during his campaign, he "walked a mile" in the shoes of Pauline Beck, a home care worker in California.

"There’s a lot of good people like Pauline who aren’t asking for much," he said afterward. "They just want a living wage. They want health care, so they aren’t bankrupt when they get sick. They want a good education for their children and their grandchildren. They want to be able to retire with a little dignity and respect. That’s not too much to ask for in a country as wealthy as ours."

Obama now leads the federal government. We must push him to follow through.

Karen Kahn is director of communications for PHI, a national nonprofit working to improve the quality of eldercare and disability services by improving the jobs of direct-care workers. 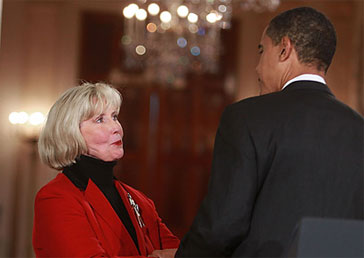